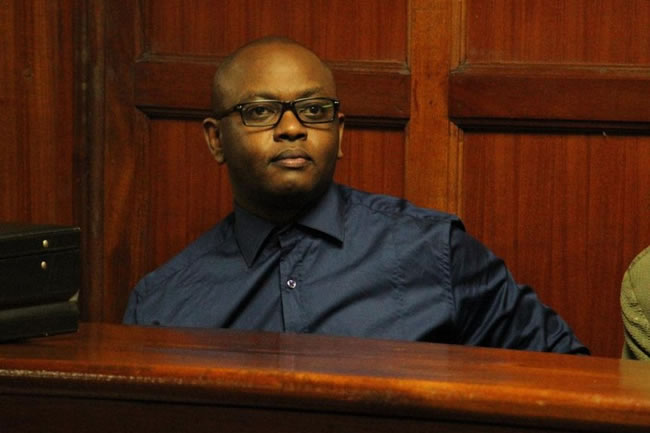 Public Accounts Committee has this morning questioned the unscrupulous businessman Ben Gethi Wangui over the missing NYS Shs.791 million.Mr. Wangui has been accused of stealing the said amount alongside Josephine Kabura and other six who have been charged with 15 counts of money laundering.

The eight are accused of colluding with devolution ministry officials to wire the money from NYS coffers to purchase property through phony companies. Watching Mr. Wangui defend himself before PAC is a waste of time and public resources. The charlatan takes nothing seriously, asked to describe himself, the man who claims to come from Nyeri but was born in Garrisa cannot remember when he came to Nairobi when he cleared school and the names of his business partners.

This is a rude chest thumping act because the transactions in question were a syndicate between him and the high and mighty government officials. He purports to have been the supplier with NYS for five years, way before the former CS Ann Waiguru was appointed to head the devolution docket. This is a cover-up aimed at protecting Waiguru who bowed to public pressure for her involvement in the infamous NYS scandal.

The documents presented by Mr. Wangui to PAC indicate that he qualified for the tender to supply his over priced oil in the 2013/ 2014 financial year when Ann Waiguri was heading the docket. Anyone who watched the interrogation was able to notice the way he was dodging straightforward and direct questions that needed one-word answers. He could not tell the exact year he began supplying NYS with overpriced commodities.

The con went further and presented a bank statement of one John Kago Ndung’u. When put to task to explain why he had submitted another man’s bank statement; he hesitated for a while and could not tell the relationship between him and John Kago when asked about it. He apparently kept evading the questions and gave answers that cannot convince even a mad man.

Using ‘convenient amnesia’ to safeguard himself against hard-hitting questions, Mr. Wangui took advantage of some the of committee members’ abnormal leniency to give filtered information to sail through the probe. The likes of one Hon. Kareke Mbiuki, a panel member, at some point, sounded like he was Mr.Wangui’s advocate. He said hustlers could be forgiven for their ‘forgetfulness’ giving an unconvincing example of DP William Ruto who rose from selling hens to the position of deputy president.

Consolidating his weak point that hustlers cannot document their transition from rags to riches, one need not be intelligent to notice that he was trying to take sides. Kenyans are tired of games, hundreds of millions were lost and youth dedicated projects stalled, watching Ben Gethi Wangui before PAC is a bitter pill to swallow and a further waste of taxpayers’ money. The man belongs in jail.

Kenya Insights allows guest blogging, if you want to be published on Kenya’s most authoritative and accurate blog, have an expose, news TIPS, story angles, human interest stories, drop us an email on [email protected] or via Telegram
Related Topics:NewsPolitics
Up Next

I Will Finish You; Boniface Mwangi Refuses To Apologize To Ruto Over Killing Juma Remarks Dares Him To Sue