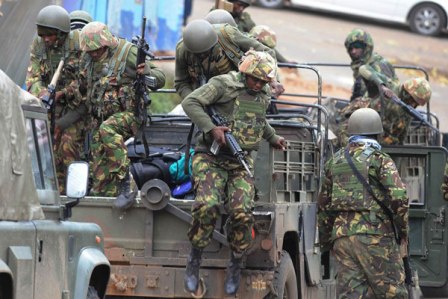 NASA presidential candidate Raila Odinga has dropped a bombshell in what is shocking yet not really unexpected making allegations that the military has been entangled into the land’s politics by being trained in the barracks as rigging agents in the coming election.

Raila attributed the rigging dating back to since ehen the High Court ruled in April that presidential election results declared at the constituency are final, “the jubilee leadership has been involved in a series of activities that we find to be extremely disturbing with regard to the upcoming elections. ” Said Raila.

The NASA leader challengedthe jubilee leadership to come clean on these matters.

First, a series of meetings of officers from the National Intelligence Service have taken place with the sole purpose of coming up with a plan to help Jubilee retain power at all costs, particularly in the event that the courts maintains that results declared at the constituency level are final.

“Jubilee appears to be putting all its hopes on the old centralised tallying at the Bomas of Kenya that enabled them to doctor and change results. It is now turning to using Intelligence and security officers to influence the august elections.” Odinga said 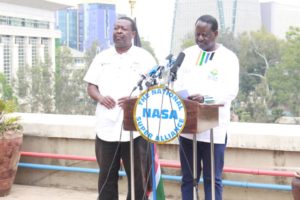 Raila and Musalia addressing the press on the security issue

The first meeting of the NIS and other groups from the national security sector took place at Lake Naivasha Lodge and the Great Rift Valley Lodge soon after the High Court ruling. Subsequent to that meeting, top officers of the various security formations in have held frequent consultations under the chairmanship of former Chief of General Staff Julius Waweru Karangi to actualise the plan developed by the NIS.

Related Content:  Missing Nairobi’s MCA Habiba Hussein Has Been In And Out Of Hospital For Two Years After Losing A Baby From A Complicated Pregnancy

Out of these meetings the following developments have followed:

A training of members of the Kenya Defence Force on crowd control currently going on at in Embakasi military barracks.

Training by the military for Administration Police officers, County Commanders and Regional Co-ordinators for unspecified roles.
Recruitment of 120 military officers from each barrack and unit for unspecified special operations.

These trainings are all currently underway at Embakasi barracks. They have every semblance with what was done at the same venue in the lead up to the 2007 general elections in which APs were later dispersed as election officials and poll agents for the Party of National Unity.

NASA is inclined to believe that the above activities are meant to subvert the will of the people in the upcoming elections. We are challenging the national government and the leadership of the security organs in the country to explain to Kenyans why a select group of military officers would be involved in training civilians like county commanders and regional coordinators.

Raila made an appeal to the military to remain faithful to the traditions of this country and their call of duty and refuse to be dragged into politics and instead focus on keeping our country safe. That has been our proud tradition as a country.

Kenya Insights allows guest blogging, if you want to be published on Kenya’s most authoritative and accurate blog, have an expose, news TIPS, story angles, human interest stories, drop us an email on [email protected] or via Telegram
Related Topics:ElectionsFeaturedNewsPolitics
Up Next

Report Shows 800K Ghost Voters Exists In The IEBC Register, Chiloba’s Interests And Why KPMG Did Nothing