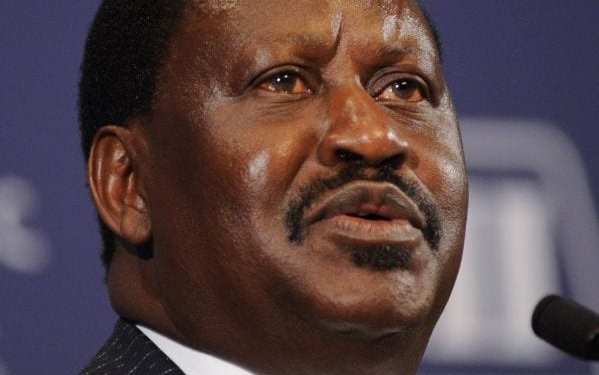 The disunity among affiliate parties forming the One Kenya Alliance (OKA) is now threatening to complicate identification of a flag bearer who will face off with the deputy president Dr. William Ruto for presidency in 2022.

The four principals Kalonzo Musyoka (Wiper), Musalia Mudavadi (ANC), Gideon Moi (KANU) and Ford-Kenya’s Moses Wetangula are retreating in Naivasha to solve the impasse after Kalonzo and Mudavadi took a hard stance on calls by President Uhuru Kenyatta to have the coalition back ODM’s Raila Odinga for the country’s top seat.

Kanu Secretary General Nick Salat has called on their partners in OKA not to ignore ODM leader Raila Odinga in their plans. Odinga’s candidature, given his age is seen as an easy ploy to transfer power to KANU’s Gideon Moi who is also harboring presidential ambitions with a small clout.  Kanu is looking at a scenerio where Odinga would be deputized by Moi for one term then he hands over power to Moi.

“ It is important for people to sit down and talk. It is about what formula will hand us a win not the question of who has what numbers. That is the discussion that I hope to have,” Salat said.

Salat who is a die hard ally of Moi went ahead to accuse those discussing the issue of flag bearer of jumping the gun since the coalition is still waiting for the pending ruling on BBI to see if they will create more positions at the top and share among themselves.

“You can’t find inclusivity right now before we are sure with the BBI. Where do you leave Raila in this? You can’t ignore Raila. The only formula that we pray for is that we get a favorable ruling on BBI,” Salat added.

He was challenged by Makueni MP Daniel Manzo, a close ally of Kalonzo who argued that the criteria of picking a flag bearer should consider the number of elected leaders a party has in the current Parliament.  A move that puts Kalonzo ahead of Gideon Moi who dreams of being a flag bearer or a running without considerable numbers in parliament and solid support in Baringo.

“You all know who has more votes, who has more elected leaders among the four principals. That is the formula of picking a candidate,” Maanzo said. 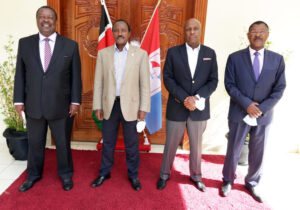 Principals of One Kenya Alliance [p/courtesy]

He also emphasized that OKA will not soften its position to back the ODM leader for the top seat this time round. Kalonzo unsuccessfully backed Raila in the past two elections and has vowed not to back him again. Both Kalonzo and Mudavadi argue that it is now time for the ODM leader to reciprocate the gesture.

“One thing I know is that we are not going to support Raila. If the principals decide to back him they will be doing so on their own. We can agree on anything else but not on Raila,” Maanzo added.

KANU’s game plan is to rope in Odinga who has more numbers in both senate and the national assembly then treat the coalition as a completely new outfit where they have Odinga as the flag bearer and Moi jostling for running mate position with Kalonzo and Mudavadi.

“We will adopt a common approach that is acceptable to everybody because if we start the argument of numbers then we will insist that voter population where the candidate comes from should be the main criteria,” Savula argued.

Ford Kenya has the smallest numbers and therefore did not argue much since it is believed that its leader Wetangula is comfortable of taking the senate speaker position. But Ford-K’s Secretary General Hon. Chris Wamalwa (Kiminini) said the coalition has contracted local and international survey firms to gauge the popularity of the four principals which they will use in picking the flag bearer.

“We are using some intervention like scientific surveys. Once we get those reports we will sit and evaluate. It is something that you cannot just wake up and announce; it is procedural and methodological,” Dr Wamalwa said.

Mudavadi also revealed that the coalition has an eight-member technical committee which is expected to present a progress report on OKA in Naivasha retreat.

The ANC boss further stated that the retreat in Naivasha is a joint Parliamentary Group meeting by the four affiliate parties for briefing on the road-map to 2022 polls.

“This is a PG of the parties that started the process of coming up with the new coalition……. A technical team will give a progress report on what they have achieved so far in the build up to OKA,” Mudavadi said.

Kenya Insights allows guest blogging, if you want to be published on Kenya’s most authoritative and accurate blog, have an expose, news TIPS, story angles, human interest stories, drop us an email on tips.kenyainsights@gmail.com or via Telegram
Related Content:  Chief Justice Maraga Faults President’s Executive Order
Related Topics:ANCFord-KGideon MoikanuOne Kenya AllianceWiper
Up Next