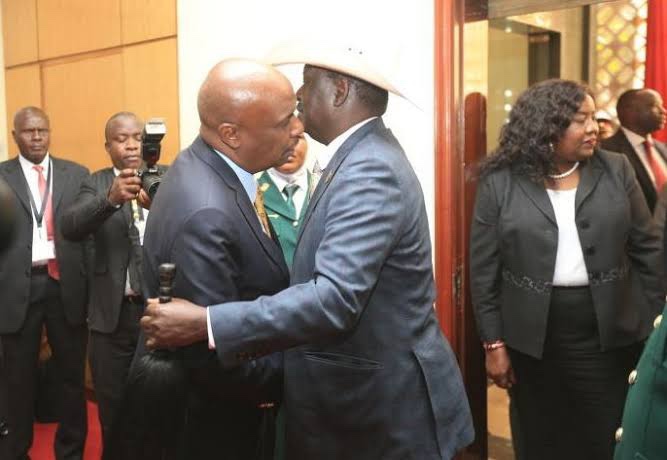 Members of the One Kenya Alliance alias ‘Cerelac Coalition’ are pleading with their BBI partner Raila Odinga to avoid any political dealings with the Deputy President William Ruto. KANU Secretary General Nick Salat took to his tweeter handle to beg the ODM supremo not to associate himself with Ruto claiming it will tarnish his image as a statesman.

Mr Salat speaks for Kanu boss / Baringo Senator Gideon Moi – a member of the One Kenya Coalition whose colleagues are accusing Odinga of changing tact over s deal to back them after 2017 polls. Wiper’s Kalonzo Musyoka, ANC’s Musalia Mudavadi and Ford-Kenya’s Moses Wetangula have challenged Mr Odinga to return an hand after they stood with him in the past two elections.

The SG spoke after the Kanu chairman and Muhoho Kenyatta held a closed door meeting with ODM party leader Raila Odinga at his Karen home on Tuesday.

President Uhuru Kenyatta and Raila Odinga also made impromptu visits to inspect the Green Park Bus terminus at Nairobi’s Railway Station in the  company of Odinga on April 1.

On Tuesday emissaries were sent to lure Odinga not to work with Ruto  though Moi claimed on his Twitter account that the visit was to check on Raila who has  recovered from the Covid-19 which he contracted last month .

I am deeply impressed by The Rt. Hon. Raila Odinga's quick and steady recovery; a clear indication of his resilience even in the face of adversity. We wish him good health, long life and boundless joy as one of our country's foremost patriots. pic.twitter.com/H13ZfdgHTB

This comes at the time when the country is witnessing  new political realignments ahead of the 2022 General Election with Raila rumored to be distancing himself from the One Kenya Alliance and getting ‘cosy’ with William Ruto.

Raila is considering an alliance with his rival Deputy President William Ruto while at the same time struggling to keep his relationship with his handshake partner, President Uhuru Kenyatta.

But the ‘cerelac coalition’ needs someoen of Odinga’s stature and charisma to psyche it up and make it a formidable force ahead of 2022. All members including the former VPs Musyoka and Mudavadi lack national support.

Kenya Insights allows guest blogging, if you want to be published on Kenya’s most authoritative and accurate blog, have an expose, news TIPS, story angles, human interest stories, drop us an email on [email protected] or via Telegram
Related Topics:DP William RutoGideon MoiOne Kenya AllianceRaila Odinga
Up Next