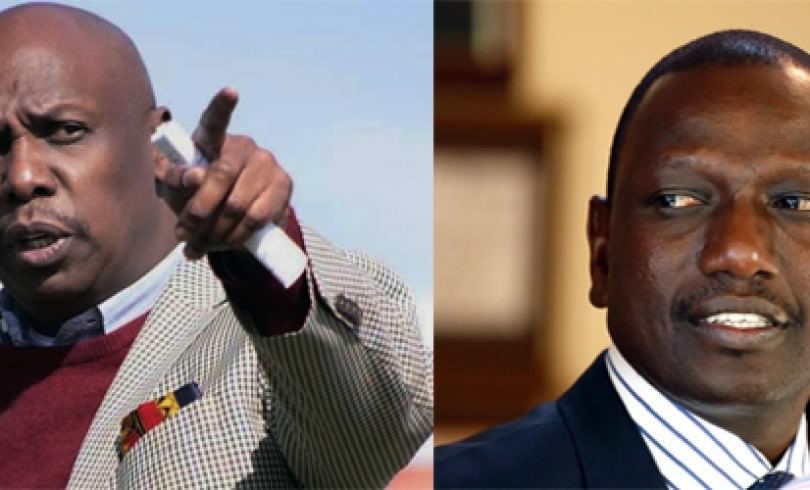 The political realignment of Moi-Kenyatta dynasties who believes in hereditary leadership seems to be taking shape again, alarming criteria to diehards of the current Deputy President William Samoei Arap “Mashamba” Ruto and tantalizing taste to the opposition who prays for nothing other than their downfall at this juncture.

It’s a routine in a polygamous family; partisan allegations frequently erupts caused by the delinquency of one party for the other party which in most cases ends up before Magistrate Court appealing for divorce.Referring to the rampant”courtesy call” meetings between the two families (Moi-Kenyatta)especially during this time and condition of overheating political temperature as just for “family friends check-ups” is trying to twist minds of intelligent Kenyans.This article involves every intelligent mind to spread and save less fortunate family and friends from surprise following this sirening break-up at the expense of political realignment which might lead to voter apathy to some extent.

The dominance of the Jubilee deputy party leader who is the Deputy President over the party leader and President of Kenya has been not only a nightmare to the ‘UTHAMAKI’nation but also the headache to President’s mother Mama Ngina Kenyatta whom within past four years have been away from the limelight.When she appeared, she was heavily coated with International scandal spearheaded by the CIA unmasking her sources of wealth generated from illegal Ivory smuggling and Charcoal dealings.

The two incumbents clinched power out sympathy and tyranny of numbers from the densely populated Central and Rift regions being that they were victims or rather masterminds in the 2007-2008 post-election violence case in International Criminal Court(ICC) and getting into power would at least console them.They were birds of the same feathers courtesy of ICC case but non-compatible regarding political ideology for future and governance.

Related Content:  Behind the scene power plays in Sonko impeachment

After the sigh of relief from the dropped ICC cases, the Chameleon began to camouflage back to its true colors (Moi-Kenyatta hereditary leadership).According to authentic media affiliates and leaked intelligence reports, Uhuru Kenyatta’s campaign consultants are behind bars utilizing Ruto’s public tainted image regarding incompetency to engineer his downfall and be seen as untrustworthy, incorrigible and luckily defect from Uhuru’s Jubilee party.Parting ways with Uhuru make Uhuru politically irrelevant in the Rift region which is believed to be the strong base of supporters.But to curb political irrelevancy of the son of Jomo he went in search of Gideon Moi an enemy to Ruto, self -proclaimed Rift Valley kingpin to send a gestured message to Ruto he can still have the support and do without him.Ruto being an automatic successor of Uhuru in 2022 as planned was fallacy according to the status quo.

The identified weakness intended to fight Ruto is of being Corruption guru and tycoon which will promote mistrust.It’s evident after Langata primary school land grabbing hence the name “Arap Mashamba” by him just to mention a few.

During 2007 General elections, he made sure through thick and thin that Moi dynasty become dormant and irrelevant in the Rift politics which he succeeded after all lost all seats they vied for.But the rise of Gideon Moi’s popularity in the political arena has been a factor of reviving the families of Kenya’s political legends leadership illusions.Lately, Mama Ngina Kenyatta wife to the Late Mzee Jomo Kenyatta whom Daniel Moi was his successor gave a courtesy call at Mzee Moi’s residence in Kabarak, however much they tried not to disclose the discussion from the indoor meeting it was a gesture and mind game message.

It is believed that the discussion was about the strategy to be put in place to make sure power revolve just within the two dynasties, maintenance of the goodwill between the two, ordeal of Ruto monopolizing her son Uhuru Kenyatta.Days after, Uhuru and Gideon Moi held a closed-door meeting concerning the August polls and in a week time, KANU led by Gideon Moi announces its support for Uhuru’s re-election.KANU maintained the high standard of political suspense not decided whether to backup the opposition coalition NASA or the ruling party Jubilee, but it was least expected to support Jubilee.The situation drastically changed after the two critical family meetings.It is so unfortunate however much former President Daniel Arap Moi isn’t in active politics, but he still rules the country indirectly through his puppet Uhuru Kenyatta.

Related Content:  Besieged Sonko Has Employed Dirty Tactics In His Disposal To Block His Impeachment
Former President Daniel Arap Moi with Mama Ngina Kenyatta when she paid him a courtesy call at his Kabarak home

Joining of KANU party in support to Uhuru’s re-election has sent shockwaves to Ruto’s supporters among them MCAs, MPs, Senators specifically Kipchumba Murkomen and Governors who were elected under the dissolved URP party formerly headed by Ruto and had threatened Uhuru to dare neglect his first wife Ruto then they will take appropriate action.The question is what measures? Sue him? No. defect.

Below was a message by a bitter supporter Donald B.Kipkorir after decision by KANU to backup Uhuru’s re-election
Daniel Arap Moi-Uhuru Kenyatta political history

Moi was the preferred successor of the late First president Jomo Kenyatta than Oginga Odinga hence he was appointed as the Vice-president and later on in 1978 after the demise of Jomo he declared himself the new President of the Republic of Kenya under the then ruling party KANU.

In 1997, Uhuru Kenyatta won his first elective post as the chairman of KANU party branch at his hometown.A strategic move by Moi to fix him into national politics.In 1997 General Elections Uhuru contested for Gatundu South constituency seat but lost to Moses Mwihia and fortunately in 1999 Moi appointed him to chair a government parastatal(Kenya Tourism Board).

In 2001 when Moi was retiring he was nominated as the member of parliament and later appointed as Minister for Local Government and also elected first vice chairperson of KANU nationally.All engineered by Moi.

During 2002 presidential candidate nomination by KANU, Moi influenced Uhuru’s nomination an act of dictatorship.After the polls he was defeated by former President Mwai Kibaki, only managing to garner 31% of the votes.

After all these undemocratic sacrifices by Moi to Uhuru Kenyatta, the appreciatable homage to pay back is to shift power back to Moi family through Gideon Moi in 2022 hence the meetings.

Uhuru has stunt Ruto deliberately by allowing KANU to field candidates in all elective posts in Rift Valley against his party Jubilee and has promised to make sure Jubilee aspirant vying for Baringo Senatorial seat against Gideon Moi steps down.This would be sidelining Ruto’s plans to bring down Gideon in the Rift politics especially Baringo senatorial seat which he begged residence to vote in a Jubilee party mole.But this is to make sure political irrelevancy of William Ruto in the Rift expires.The sooner Ruto defects the better for he will rest his case and fight unlimitedly under nobody’s control but his own.

Views expressed in this article are that of JohnBosco Juma and doesn’t represent the stand or position of the blog.Twitter Account for the author is @JohnBosco_Juma.

A Radical Dissection Of The Nairobi Gubernatorial Politics, The Power Games In Play