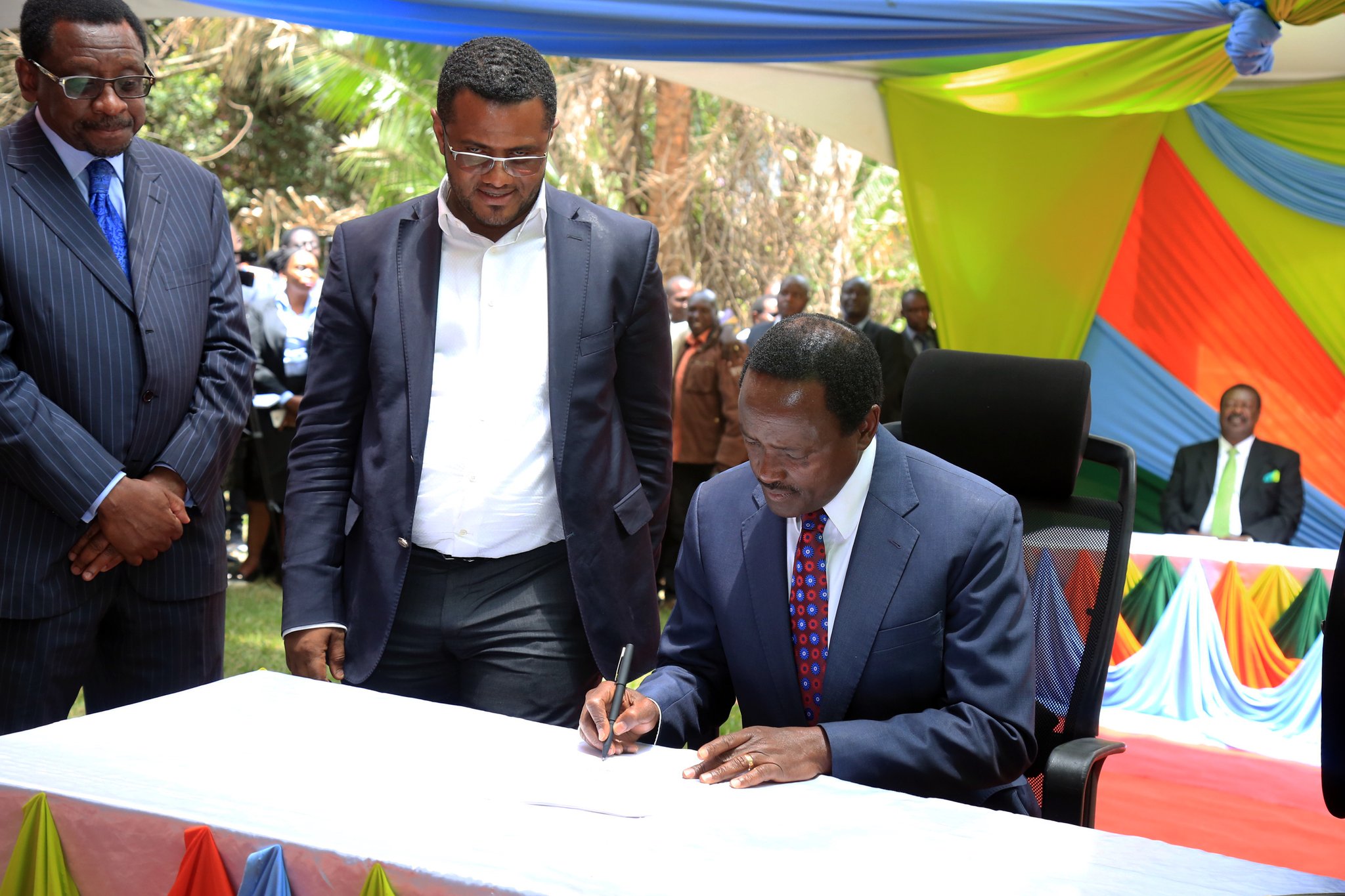 While the cameras rolled and flicked at NASA’s Lavington Secretariat and opposition leaders stream in for the big occasion to formalize the coalition, behind scenes a lot was playing and kept away from the public eye. While the press and other party officials drawn from other affiliate parties calmly waited for papers signing, The party principals retreated to the boardroom for final touches on the pact.

Unusual events were witnessed at the entrance to the function. Legislators affiliated to Kalonzo’s Wiper Party refused to proceed to the tents to take seats instead distanced themselves to a corner where they discussed only trees knows what. They insisted on only moving when their party leader walked in. Other leaders arrived much earlier, but Kalonzo took ages and was the last to arrive.

In the boardroom where the leaders had camped In, a state of uncertainty clobbered the moods. Kalonzo came late in a move that raised suspicions amongst attendees. Minutes later the officials proceeded to the arena for the Official signing of the document. Kalonzo and Wetangula remained behind as Raila and Mudavadi moved to the podium. It was unclear what the two were discussing away from the rest, but the body language ignited speculations that he was having a second thought.

The party principals posing with the documents solidifying NASA. Faces telling a story.

Orengo took charge of the function and officials called forward to ink the pact. Kalonzo was seen to develop cold feet and looked like he was about to pull a quick one. A section of the crowd quickly and loudly chanted his name as a tactical move that pushed him to sign the document that would soon haunt him should reconsider his stay in NASA.

Kalonzo remains one of the most unpredictable politician who has perfected the art of ‘Kati Kati yao’ sources highly placed in the coalition tell Kenya insights that the man who was rumoured to be willing to crossover to Jubilee for the foreign office that was to be left vacant on Amina’s upgrade to the AU, is a man being treated with caution. His cards kept tightly to the heart.

Unconfirmed reports indicate that attempts are now being made to offer Kalonzo Sh5 billion as compensation for what he has spent, more or less as those who will drop their ambitions in Nasa supposedly will be repaid their expenditure so far in a negotiated power deal.

Sources say. Initially, the man tasked to broker the deal between Mama Ngina and Kalonzo was the Health cabinet secretary Cleopa Mailu, but he is said to have disappointed.

It is said Initially; it was proposed that Uhuru was to meet Kalonzo on a one-on-one, but the idea was dropped after Uhuru said that meeting Kalonzo would make his deputy William Ruto uncomfortable and would create tension between him and his deputy regarding the 2022 race.

It was after such considerations that it was agreed Mama Ngina was the best person to broker the Kalonzo deal and also considering that she is the one calling shots in the Kenyatta family and as fearless as she is, even the DP cannot have the guts to question her political moves.

Kalonzo stands in a strategic position that would either give NASA power or deny and award jubilee. Battle Supremacy is rife in the NASA net. So evident in distrust that during his address, Mudavadi reiterated that personal interests must be put on a leash as the leader’s unity is paramount to delivering Kenya from Jubilee.

The Eastern, Kamba vote that Kalonzo commands could make or break the math for NASA. A fallout of Kalonzo with NASA would earn Jubilee an early return to the Statehouse. This is why strategists and power brokers are working around the clock to woo Kalonzo out of NASA. However, It’s not as easy as it seems as his political future stands in line, He can either stick with NASA and if they lose his relevance will diminish and upcoming kingpins like Mutua Alfred take up his position.

Wiper protagonists are going for nothing short of the presidential ticket. Should Kalonzo revolt with NASA there are high chances he won’t join Jubilee but instead run as a wiper candidate. Such a case would be a blessing to the Jubilee party, and this is the line JP strategists are stroking. They’re looking into convincing him out of NASA, sponsor his campaigns in Wiper and adequately compensate or rather buy him. In such a case he bolts out to be wiper then he’d be working indirectly with Jubilee. The icing on this deal is Kalonzo could come 3rd in the elections then join Jubilee in a coalition arrangement. Another classic Kati Kati yao.

However, The shots haven’t been called yet, for a man who’s battling loyalty suspicions and being called names, as he insisted on several occasions that this time he won’t repeat the previous mistake and stick within the united opposition. Kalonzo might just surprise us all. In politics, a day is a century and nothing is likely only time will tell how events will unfold.

Related Content:  So Just Who’s Sam Wakiaga, The Man ODM Wants To Be The Next Governor Of Nairobi
Kenya Insights allows guest blogging, if you want to be published on Kenya’s most authoritative and accurate blog, have an expose, news TIPS, story angles, human interest stories, drop us an email on [email protected] or via Telegram
Related Topics:
Up Next

Kiambu Politics: Governor Kabogo Kicked Out From Uhuru’s Inner Circle And a Plot To Eliminate Him Hatched