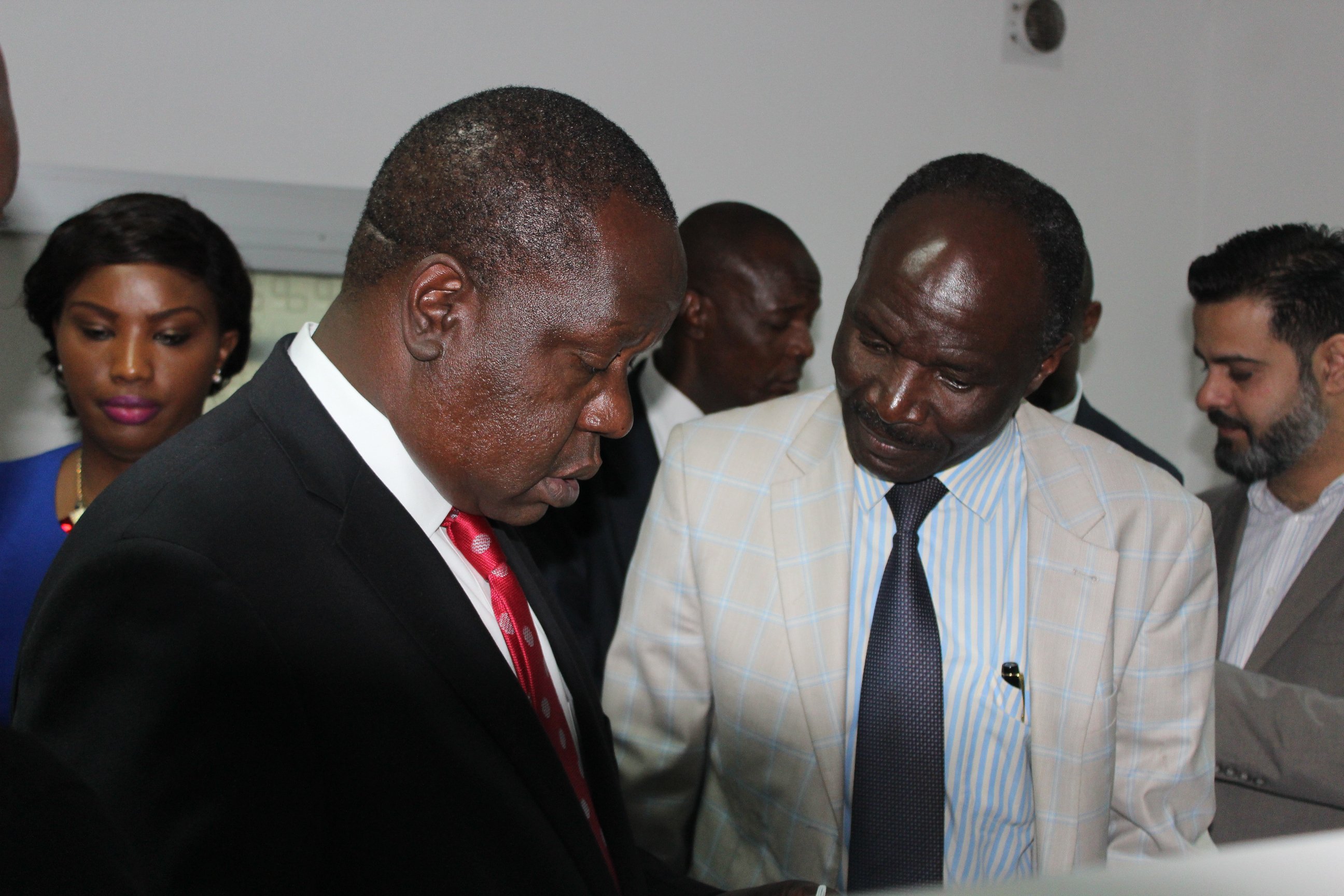 Many Kenyans always have ambitions of greener pastures so they’re ever looking for opportunities mostly abroad, the unemployment rate is at its all-time high in the country. Apart from employment, there are several reasons for travels and this why out airports are ever busy. They say getting a visa to say the U.S. is as easy as a camel going through a syringe and if you thought that is hard then try getting a passport first, a walk over melted metal.

Immigration Department in Kenya is killing many ambitions in Kenya through a systemic rot that range from Corruption, Poor service delivery, very poor communication and outright incompetence in terms of adherence to timelines.

Such is the case of Paul Mathenge who lost a scholarship from St Georges University, Grenada. “I applied for my passport on 14th Nov 2017 and as late as today the 18th Feb 2018, getting it seems a pipe dream. I was to be admitted on Jan 5, 2018. I constantly enquired about the status of the passport everytime getting the same response that it was still in process. I was replaced from the scholarship class on Feb 8, because I didn’t show up for a month.That is the price I paid for ImmigrationDept incompetence. I lost something I worked so hard to achieve.It was a deep heartbreak.I have realized very many Kenyans share my plight.” Paul painfully narrated his story to Kenya Insights. 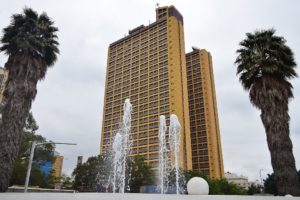 He continues, “Getting a scholarship was a culmination of years of hard work and relentless mailing of Donors. I sometimes used to forego lunch so that I could use the cash in a cyber. But all this rough and teary journey has been taken away by the incompetence of the Immigration Dept. My dream of getting an education is dead. Dead but not forgotten. I will rise up again, dust myself up but Immigration dept is killing many dreams.”

We embarked on an investigational path to unravel the mysteries behind this and realized Paul’s tribulations is not unique , the cases are replicated across the country. Immigration Dept Kenya is the alter of bribery. While others wait for even sux7 months to get a passport from the date of application, you can secure a passport in 4 days if you are, financially, politically and ethnically correct. Cases of missing files, printed passports missing unless you pay a fee, constant system outages are some of the evils. There are cases where the passport has been printed but held back until one pays the bribe, a not yet printed passport would spring out of the blues should you succumb and pay the officials bribes.

Kenyans apply for passports in their thousands on a daily basis making Immigration Department one of the busiest government’s branches and with this comes the curse and corruption opportunities. It is so bad that when you walk into Nyayo House for a passport, corruption starts at the entrance where the security officers who’re part of this drenching cartel will ask if you want your passport ‘itoke haraka’ obviously you’ll say yes and just like that you walk into their trap. You’ll be directed to persons inside the building who’ll ensure a speedy processing, this is the corruption path you’ve taken. 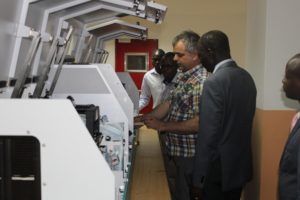 Ideally, application for a normal 32-page passport costs Sh.4,500 and should take an average of two weeks to be out, this is the legal route but surprise on you, you’ll be damned to sit comfortably thinking it will be that easy. Corruption at Immigration is shamelessly so open that on placing your application at the offices you’ll be asked with a straight face if unataka itoke haraka, at an extra ‘fee’ your passport can be fast-tracked to be out in a week and some even deliver within the day depending on how much you pay. Bribes ranges and mostly they ask for Sh,30,000. With ultimate arrogance and impunity show off, they’ll give you the option of giving the bribe and remain assured of your passport or leave you to go the clean way and wait for a lifetime for your passport to be out.

From our investigations, files that are “not paid for” that is the forms whose applicants paid the standard fee without bribes are shoved aside and barely leave those desks for processing. You’ll be at home counting days thinking the application that you placed at the immigration office in Kisumu is being processed yet, in reality, it’s in the dusty desks in the same place simply because you didn’t follow the ‘due process’ of giving bribe. Your visits for collection will keep on being postponed with ‘still under processing’ lie until when you succumb and buy ‘tea’. Everything is unreal until you find yourself applying for a passport believe me.

We’ve also gathered that the department’s officials work with a stream of brokers who have coined a new way of preying on their victims. Immigration Department social media pages are awash with complaints, angry and desperate applicants who get the same old lie of passports still being processed. So here’s what happens, the brokers who’re camping on these pages, identify a target who has placed a complaint then privately contact them with a promise of offering help for speedy tracking and delivery of the passport. The tracking portal is also faulty with no much on receivers end to count. 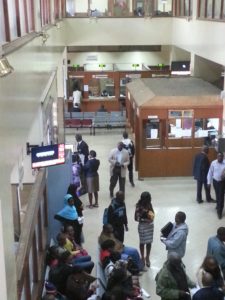 Applicants streaming at the Immigration Offices.

During our undercover investigations where we posted a fake complaint on Immigration Department’s Facebook page, a man identifying himself as Munene privately contacted promising to help me get the passport under 24 hours. He gave his number and we talked on the phone, he claimed to be working at Attorney General’s office where they deal mostly with diplomatic passports but  has the right muscles to ensure my passport would be out by evening same day (we talked in the morning). This was to happen if I gave kitu kidogo of Sh.30,000 my goodness, on top of the standard passport fee, you add extra Sh30K see how expensive it is to get that document?

Because of desperation due to time limits to travel, many Kenyans are forced to play to this evil card since this is the norm now and there’s nothing you can do about it, one official working at their offices in Mombasa told me there’s nothing, absolutely nothing that can be done to stop this however much we expose the rot. An excuse given is there are only three printing machines in the country and two are down leaving only one in operation and which is unable to take the heavy workload for the new generation passports.

Related Content:  How Stealing Sh1M From Ruto Made Bundotich Kiprop Buzeki Now A Billionaire An Idol To The DP

But corruption at Immigration didn’t start the other day and in 2016, the department announced online application as a measure to curb corruption but this has done little to stop the menace since one will have to physically present the downloaded forms for biometrics and other verifications and there then, you fall right into their arms.

Those who play by the cards and give bribes ends up with the document in the shortest time, those who stick by standard rules pay the ultimate price of a frustrating journey trying to get a passport. In the case of Paul, a young farmer who lives in Taita but had to travel to Mombasa for the passport, he had used about Sh50,000 on his unsuccessful journey. This was on endless trips to Mombasa and staying in hotels during these times since he wasn’t a resident. Mark you, he refused to pay the bribe so he was kept waiting meaning more and more trips, now if he played along at last by paying the bribe of Sh30,000 he’d have used Sh80,000 also note being a small-scale farmer, much of this money would come from relatives as a loan. How many people out there are going through same tribulations? Many!

Embedded corruption at these offices continues to kill many ambitions and relationships due to deliberate incompetence, we’ve established the department has the capacity to sufficiently handle the number of applications but instead opt to play monkey business to leave open space for bribery which as now remains the surest way to get a passport in a snap. It is sad that a document that should be given in standard route is a cash cow venue. The corrupt officials give the nature of desperation for the document, will continue preying on applicants. The cartel is firmly embedded that they boast around chest thumping how nothing can be done to dismantle it. Not unless the pigs start flying and president cracks his whip, Kenyans have many more monkeys to strangle including immigration impunity and toxic corruption.

Kenyan Court About To Legalize Homosexuality