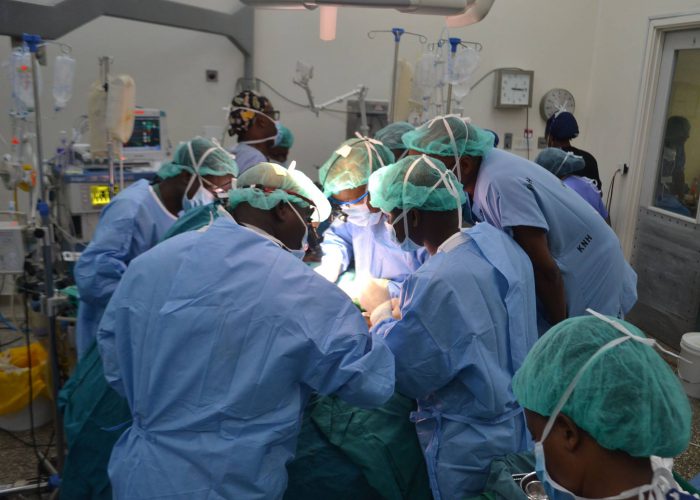 Doctors at KNH performing a procedure at the theatre.

Being the country’s top referral hospital, chances are, if you’re poor to afford private hospital and developed a severe health complication, you’ll end up at the institution that handles average 30,000 patients on a daily basis, lemme add that the general staff is around 6,000 with a bed capacity of 1,600. With such statistics showing the imbalance, you already got a hint on where this article will be going.

Last time KNH made a positive public news was in November 1st, 2016, for 23 hours, a group of over 50 doctors worked uninterrupted to separate conjoined twins, this was a landmark stride in Kenya’s medical history of not Africa, it has us walking shoulders above the ears.

However, the country’s top public hospital has been engulfed in scandals hence becoming a reference to mediocrity in healthcare. Everyone who has been to KNH has a distinct story, I’ve been there both as a patient, visitor and also as an observer, I have a pack of stories.

KNH has experienced several challenges since the early 1980s in its endeavors to provide quality health care. These have included overcrowding, quality of care, poor attitudes, under-establishment in human resource and deterioration of medical equipment.

This has been attributed to management weaknesses, both in structure and staffing, the absence of good controls and system, and the slow bureaucratic decision process.

Currently, the hospital is on the public’s radar following jaws dropping allegations of rape cases on just delivered mothers! The thought of a straight from the delivery room mother being raped in the corridors of a hospital that is supposed to give utmost protection is vexatious. It highlights how to the bottom of the barrel the society has sunk. 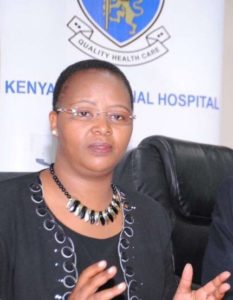 When the accusations started flowing on the internet, a never seen before outrage was sparked and honestly, you’d never anticipate anything below. Rape is a sensitive matter that does not only wreck the lives of victims but their families, the thought of it is frustrating. It didn’t come as a surprise that a mob lynching reaction to the accusations would become the next most effective reaction, in such a devastating situation, you’d least expect sound, calm reasoning and this is very normal.

KNH CEO, Lily Koros, like any other head of an institution, took a familiar root by downplaying the accusations a natural response for the reputation protection of KNH, I’d expect nothing less. From confessions, the magnitude of this scandal is beyond imagination, I won’t dwell much on the rape accusations instead, will await the police report and then comment after. For now, let’s focus on the angle that no one is really paying attention to.

Unless you just landed from another planet, it wouldn’t shock much that these heinous acts are coming to surface just at the helm of cabinet and management announcements. For those in the know, when analyzing a situation especially on a public institution, never told out political invisible hands. 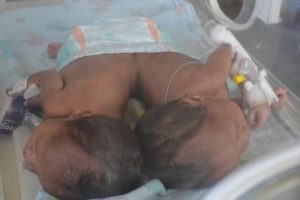 The conjoined twins at KNH before separation.

It didn’t come as a surprise that insiders too, saw the underlining. The Kenya Medical Practitioners Pharmacists and Dentists Union (KMPDU) had sensed politics and boardroom fights over the matter.

“Jostling for positions of management of the parastatal called KNH and the Ministry of Health at large could be behind these unfortunate incidents and allegations at KNH,” the union’s secretary general Ouma Oluga said in a Tweet.

Kenya Insights has learned that KNH CEO, Soros had been slotted for the MoH CS post that’s yet to be announced, she has been facing fierce opposition at KNH with many salivating and planning her ouster. This doesn’t exonerate her from the horror stories but meant to give you a different perspective. It, therefore, doesn’t surprise that these accusations that runover lengthened period, only came to surface at a time when the president is planning to announce his last batch of the cabinet.

Doctors went on strike for over 100 days, throughout, the medics were highlighting the public on the pathetic conditions at KNH and other public hospitals, instead, the call for better healthcare was marred with politics and the doctors accused of sabotaging Jubilee. It is the same horrible conditions they were fighting for that the public is still fighting for.

Doctors and staff at KNH average at 6,000 compare that with over 30,000 patients daily on a hospital with 1,800-bed capacity and designed to handle lesser numbers then you’ll notice the problem. Understaffed, overworked, under-motivated doctors and staff, a disaster recipe. Doctors are in plain, overwhelmed, they’ve stretched beyond limits, part of CBA was hiring more doctors to balance doctor to patient ratio, fell on deaf ears. 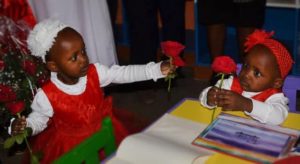 The conjoined twins after separation.

KNH problems are structural, fixing them need sobriety, rising above mob lynching and tasking the government to implement the proposed CBA instead of dancing around it. Being the national referral hospital, patients have escaped from Kenyatta National Hospital without paying Sh5.4 billion.

The growing debt at the national referral institution continues to threaten service delivery, further raising queries about the effectiveness of services by the hospital. Hospital CEO Lily Koros explained that the hospital has accumulated the debt from defaulting patients and other institutions.

“The unpaid bills are to the tune of Sh5.4 billion. We have been writing letters to those whose contacts we have, asking them to pay. However, some are from street families and there is not much we can do about that,” she said.

KNH was designed to take up serious medical cases, however, this has not been the case entirely. KNH has become the dumping site for Nairobi’s sick who are poor:

Kenya will pay heavily for converting KNH into a Health Centre for everything instead of the Specialty referral hospital it was designed to be. KNH MUST stop being the triage desk for Nairobi and its environs. Surrounding hospitals have to be empowered to do their work.

Thinking a bit more, why should KNH even be admitting mothers who need to deliver normally? And children with diarrhea and vomiting who only need IV fluids for rehydration?

Look, normal pregnancy, labor and delivery are classified by WHO AS BASIC ESSENTIAL OBSTETRIC CARE. In a well-functioning health system, such issues should not go beyond a Health Center. As a matter of FACT, none should go past a District Hospital that has a basic obstetric theatre and can transfuse blood. In Nairobi, these are the things that crowd a National Specialized Teaching Hospital at the expense of real cutting edge care like Gynecologic cancer care, Artificial Reproductive Technology and complex Surgeries and management of Blood cancers, real issues.

Nearly all hospitals surrounding KNH have technically stopped working be it Mbagathi, Mama Lucy just name it. Even drunkards engaged in a brawl who need a few stitches that can be done in a dispensary all find themselves at the KNH Casualty. As a result, the place is teeming with humanity day and night. And where there are such crowds, definitely security breaches will inevitably happen as there are opportunists masquerading as patients or patient attendants with criminal intent. This is not even mentioning the poor and homeless Nairobians like street children who find the KNH A&E a welcome shelter from rain, cold and other vagaries on the streets, of course, they may never pass an opportunity to steal or commit crimes in such a messy crowded place. 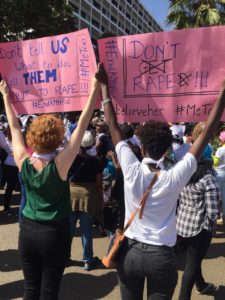 Protesters during the #EndKNHRot demos held in Nairobi on Tuesday.

The TRUTH be said, KNH STILL has the same infrastructure it had in 1976, in FACT, it still has the same 12 OPERATING THEATRES IT HAD IN 1993! 25 Years on, Nairobi’s population has almost quadrupled and Health facilities run by Nairobi County have almost all ground to a halt, KNH now uses the structures of 1993 to serve 4 times the population.

So, when I see a Senator castigating KNH and not asking his/ her Governor on what plan the Governor has to get County Hospitals within Nairobi working and working well, I just read vendetta and political lynching instead of a genuine desire to deal with the problem.

I would challenge anyone to go and camp at KNH A&E the whole night and count the number of ambulances from counties referring basic things like Caesarian sections to KNH. It is a farce!

Get peripheral Hospitals in Nairobi and its environs to work so that KNH can stick to the mandate it was founded to deliver on: Offer Specialized and Sub Specialized care, do Research and Teach to advance the Science and practice of Medicine.

Sometimes I am even tempted to sympathize with the unlucky Kenyan who finds himself or herself as the CEO of KNH. You have to spend so much of your time firefighting as you try to lead an Institution expected to work on the backdrop of a FAILED SYSTEM and SECTOR. In FACT, the KNH CEO needs more support than condemnation so that SHE CAN SHUT CLOSED the A&E Department so that that traffic filling KNH A&E is diverted to peripheral Hospitals in Nairobi. KNH then should only run Specialized and Sub Specialized Clinics where patients only come on Referral and on prior appointment.

The Kenyan Health Sector is still crying out for major Reforms, an overhaul of the Colonial system we inherited and not merely piecemeal token changes. In a now custom design, the noise will go off but as long as the structural failures remain embedded, expect nothing less instead, postponed problems. Drum beats to the dead.