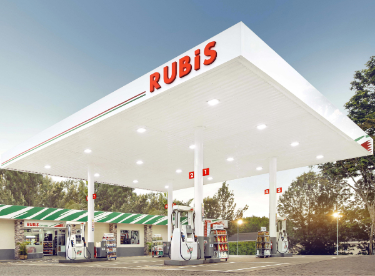 A foreplay game that elite group of oil smugglers in Rubis Energy Ltd fraternity earlier on directed their gun towards their clande Gulf-energy Ltd of which Rubis owns the subsidiary Gulf-Energy Holdings Ltd.

Rubis Energy used Gulf energy Ltd as an escape goat for a deal gone sour and now some state officials involved are now distancing themselves to save their lucrative jobs. In a case of rumbling accomplices – friends in crime are turning enemies.

According to insider sources, the officials at the Ministry of Petroleum and Mining offered a safe veil of shield to invisible but well-connected team code-named “elite group” to facilitate clearance of the consignment at the Port of Mombasa.

Our sources also intimated the timing was also conducive to evade possible detection. Records show that the vessel, M/T Jag Prerana, was allowed to offload the fuel, worth billions of shillings, by officials from the Ministry of Petroleum following a request from oil marketer Gulf Energy despite the fact that it was not among the firms prequalified to bring in the commodity.

Joseph Wafula, Chief Economist at the Ministry of Petroleum directed clearance of the consignment upon payment of the requisite levies and taxes on December 30, 2021.Charles Nyakundi, Supply and Trading Manager at Gulf Energy had written to the ministry and the Kenya Pipeline Company (KPC) seeking clearance for the cargo to be offloaded.

Appearing to be defending the cartels, Petroleum Principal Secretary Andrew Kamau said the petroleum products had been imported within the provisions of OTS.

He added that the issues that could have arisen may be due to misunderstanding of how the OTS works among some players or even differences among themselves.He explained that the cargo in dispute was part of a tender that Gulf Energy had won earlier.

The firm had requested the industry to allow it import in different batches.The 30,000 metric tonnes of super petrol was the second cargo.

“Once they have been awarded the OTS tender, the modalities of delivering the products is up to the marketer. It might be through one ship or multiple ships as long as the other oil markers are in agreement. A request to deliver in more than one batches is made during the vessel scheduling meeting (VSM), which in this case was done and approval given. The quantity and price however do not change,” he said, adding that the oil marketers – including members of Omak – had representation at the VSM meeting that gave the vessel Jag Prerana the go-ahead to discharge ahead of the others.

“I fail to understand the issues they are raising in the letter. Is it that they wanted to buy the fuel but denied the opportunity or that they did not want Gulf Energy to import?”

He said at the OTS, the government acts as the referee in overseeing the tendering process, adding that everything else is in the hands of the oil marketers. Omak also noted that the vessel that brought the fuel displaced other ships that should be discharging petroleum products at the Kipevu Oil Terminal. This could result in supply hiccups over the coming weeks.

Already there are reports of fuel shortage in the country. At the government-run oil facility, only one tanker can discharge at a time, and whenever vessels are waiting to discharge products, they penalise Kenyans by charging demurrage fees.

The Kenya Ports Authority is in the final stages of building a Sh40 billion floating terminal that will allow four vessels to discharge at a go, cutting demurrage charges.

“The vessel that should be discharging currently is the MT Sloane Square delivering gasoil and is now sitting outside while demurrage is accumulating, who will pay for this demurrage?” poses the association in the letter to PS Petroleum. It added that “Epra should not allow demurrage related to the next four vessels that have already arrived at the port of Mombasa be passed to the Kenyan consumers”.

The controversy over the importation of some 30,000 tonnes of petrol into the country over the festive season has escalated, with the State now accusing Rubis Energy and an oil marketers’ lobby of seeking to create an artificial shortage.

Making them the musketeers of this whole drama. Rubis Energy CEO Christian Bergeron and the Oil Marketers Association of Kenya (Omak) chairman Abdi Salaad last month wrote a protest letter to the Petroleum Ministry and the Energy and Petroleum Regulatory Authority (Epra) saying that importation and offloading of cargo was illegal having been done outside the Open Tender System (OTS).

But Principal Secretary for Petroleum Andrew Kamau dismissed their claims, saying they made the allegations in a bid to create an artificial shortage and trigger a security scare as motorists scampered for the limited supply of super, enough to last the anticipated outage.

“We are therefore surprised that even after attending the Vessel Scheduling Meeting (VSM) you chose to go public alleging that this was a private cargo/illegal cargo. This kind of insincerity is not only unfair but unacceptable,” Mr Kamau said in the letter.

“You alluded that the country was to face a stock out, which is dangerous and would cause panic buying and cause an artificial shortage.”

VSM are meetings where industry players and the regulator plan how different ships ferrying petroleum products are lined up at the port and allowed to discharge their cargo.Gulf Energy imported the 37.5 million litres of super petrol aboard vessel MT Jag Prarena.

The ministry says players had agreed on an emergency stock to avoid supply hitches due to increased demand over the Christmas and New Year festivities.

Rubis Energy and Omak said that the scheduling of the vessel delayed other ships that had been lined up to offload fuel and also led to an additional Sh100 million in demurrage costs — waiting fees for delayed ships.

Minutes of a Zoom meeting held on November 30, 2021 show that Rubis Energy attended the session where importation of the emergency stock of super petrol was part of the agenda.

The letter is also copied to Petroleum Secretary John Munyes, Epra, Kenya Pipeline Company, the Director of Criminal Investigations and the Ethics and Anti-Corruption Commission. Rubis Energy had said that importation of super petrol contravened the terms and conditions of the OTS, a position that mirrored that of Omak.

“We therefore wish to express our dissatisfaction in the way the import was planned to give undue advantage to a few OMCs (oil marketing companies) which is contrary to the OTS terms and conditions,” Mr Bergerone said in the protest letter.

Kenya Pipeline Company, the State agency in charge of storing and distributing fuel, had last month warned of an erratic supply of super petrol in Nairobi and western Kenya due to a spike in demand over the festive period and power-related challenges on all its main lines.

Mr Kamau defended the decision to import the cargo, saying it was meant to avoid a similar incident in 2013 when an OMC tasked with importing jet fuel failed to ship in the product, a move that exposed the country’s air transport sector.

“The interest of the Kenyan people come first. It therefore requires a high degree of soberness to manage the oil industry today,” Mr Kamau added in the letter.

The system allows the lowest bidder on any given product to import on behalf of all the other oil marketing companies. The tiff pitting the ministry on one side against the French-owned Rubis Energy and Omak comes on the back of an industry meeting held last month where Total Energies, Vivo, Ola and Rubis Energy had reportedly requested additional stocks to meet a spike in demand during the festivities.

The letter looks set to put Rubis and Omak on a collision course with the State ahead of a planned industry meeting set for Tuesday and Wednesday next week where a review of the current OTS is top on the agenda.

“The ministry has scheduled a two days’ workshop for CEOs to be held on 25th to 26th January 2022 to review the current status of the Open Tender System (OTS) terms and conditions. This is therefore to invite you for this meeting,” Mr Kamau said in the letter. 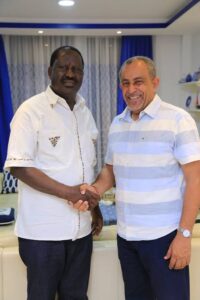 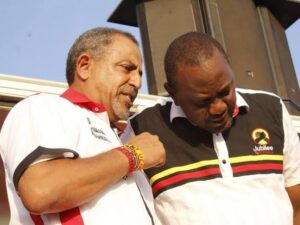 Francis Koome Njogu, was the Managing Director of Gulf Energy is estimated to have earned Sh1.9 billion from his 20% stake in the company. Njogu is a businessman and owner of Alba Hotel, in Meru town. Duncan King’ori Mukira who earned Sh1.2 billion from his 12.5% stake and Paul Kiprotich Limoh, a similar amount from a similar shareholding.

The rest of the 25% stake in Gulf Energy Holdings which also earned an estimated Sh2.4 billion was owned through a company called Nama Kenya Limited, a U.K registered company that is a minority (20%) owned by a Kenyan named Ahmed Said Bajaber, who is a director at the Gulf African Bank.

“We source, charter, export, retail and store quality petroleum products from all over the world to various destinations in East Africa.”

The deal was first announced in November 2019 but was given final approval on February 25th by the Competition Authority .

Kenya Insights allows guest blogging, if you want to be published on Kenya’s most authoritative and accurate blog, have an expose, news TIPS, story angles, human interest stories, drop us an email on [email protected] or via Telegram
Related Topics:Gulf EnergyGulf Energy Holding LtdRubis Energy KenyaSuleiman Shabhal
Up Next