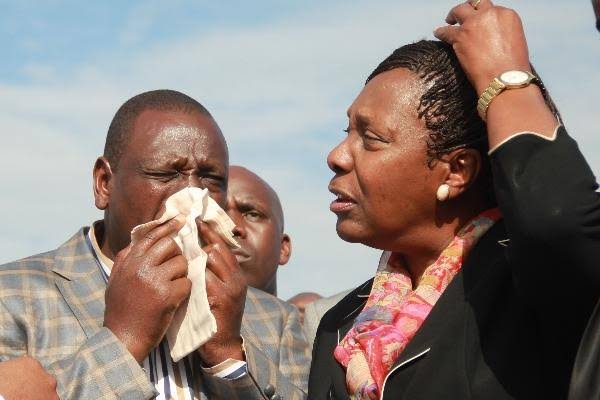 DP Ruto and Governor Ngilu at a past event.

In a widely broadcasted live recording on his Facebook page, Nairobi Governor claimed his life was under threat. Sonko made claims that the NIS has been spying on him over unknown reasons.

In the recording, Sonko touched a topic that’s going to be the basis. He said the deep state was after him. He went further daring them to go ahead bragging that he’s immortal. Who’s this deep state he was talking about? Nobody knows, nobody will.

Now, the deputy president of Kenya William Ruto recently made similar claims that his life was in danger. Apparently, some CSs has been meeting at a hotel adjacent to the National Intelligence Service Headquarters. This is where the bluff starts.

How on hell do you gather balls even if you’re as solid as Lwanda Magere to even talk about killing someone in an hotel with all the surveillance and more so knowing well the NIS ears and eyes are all there.

Why is the DP excessively paranoid, suspicious of everyone including his shadow? Has he made too many enemies? Or here’s a man willing to go to the extreme for it seems the 2022 presidency is a matter of life and death to him?

Even the so called deep state knows well killing a leader in the rank of Ruto can be the worst mistake they can do. Ruto has been sliced well, he no longer controls the cabinet, he’s like a wife trying to hold on to a marriage that’s over even after the husband running away from home, she still hopes he’ll come back.

Moses Kuria the Gatundu loudmouth MP once called for the assassination of Raila Odinga. Do you think he was the first leader from Central or anywhere to have had such thoughts? I’m certain it has been considered but you see the problem is, leaders like Raila who hold millions of supporters you don’t touch them unless you want to lose a country.

Well one can argue that Ruto has credible reasons to be afraid of his life since people like Saitoti who had similar presidential ambitions were assassinated in the election stretch, balderdash. Ruto is not anywhere in the influence level as Saitoti was then. Ruto is way more popular, he has a following, a blind one, like a fly that will follow a corpse to the grave.

I really don’t know how the assassinations are plotted, however, I know most of high profile cases have been attributed to the state but still, no one in the state has never been singled out and pinned to any assassination from Tom Mboya to Chris Msando.

It’s always a quick clean job. Saying someone like Mucheru, Cecily people who don’t even look like they can slap a fly if it landed on his crotch is the epitome of foolery.

So far what we know is some unauthentic letter that looks like a work of some kindergarten bottom of the class kid job is the basis of investigations that we don’t even know how or where it will go.

DP who’s the complainant is even yet to record a statement with the DCI, what is he afraid of if indeed he knows its authentic and life in danger?

If someone wanted to kill Ruto, it can’t be fine by state errand boys drinking tea in some hotels, there are unseen forces in this country, people who seat in boardrooms in some dark place somewhere to decide the country’s next president, those ones I can buy assassination plot if any. But again, you’ll never hear of their footsteps like the extra cautious Saitoti didn’t see them coming. So tuwache porojo my friend.

Im also in the view that if these claims were made for political scoring which is a likely scenario since the DP is on full campaign mode, it lays a hostile ground. He’s likely to whip up emotions in his community who’ll say their son is targeted and ‘arm up’ to protect him. I don’t need to go into details, history of the country speaks for itself.

So until the DP goes to record a statement that his life is in danger, this remains the bluff of the year in my opinion. I’m my village there’s a popular saying “Jakuodho oyie dhao’. Ends.