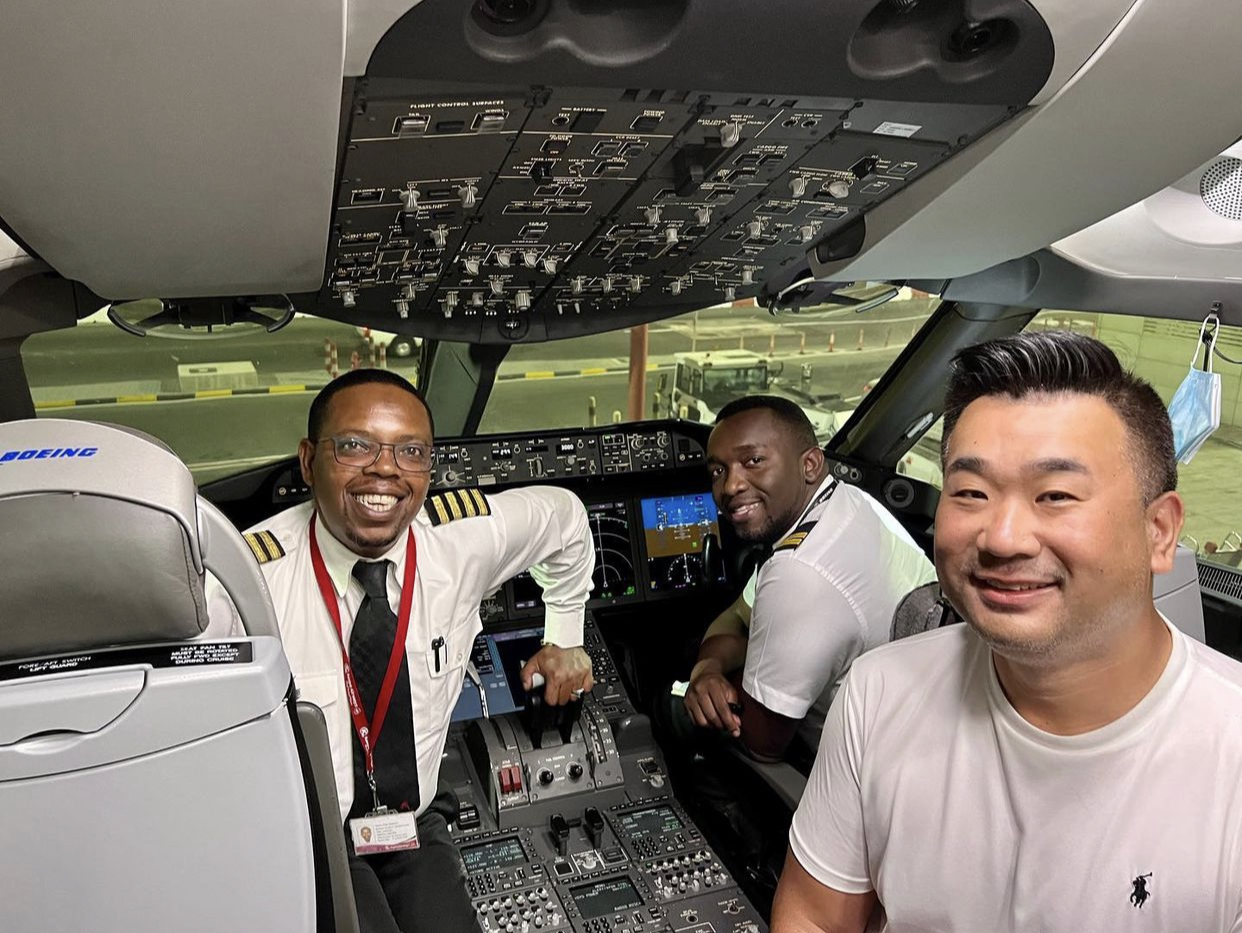 Sam Chui onboard with KQ’s pilots.

If you’re an aviation enthusiast and follow much online, you’ll definitely know about Sam Chui. However, the KQ crew missed out on a good opportunity, struggling to stay on their feet, the loss making national airline, couldn’t recognize the influencer onboard and even at one point, the ground crew who’re generally rude and cruel, stopped him from filming the content for his blog.

Sam Chui is often referred to as the Godfather of Aviation Geekdom—and it’s a crown he can wear with pride.

As the most influential social media star in the airline and aviation sphere, he goes places most of us can never get to—and he does it with humility and a smile on his face.

He has flown with more than 240 airlines and in 180 different types of aircraft. On his Instagram, he says he’s flown more than 10,000 hours.

To put it into perspective, he flies around 150 times a year—or every 3 days on average. He’s been to every continent except Antarctica.

He’s had time to fine-tune his choice since he’s flown in a Boeing 747 more than 350 times.

And if you’re looking for trivia, here’s some: Sam Chui has been the top-rated photographer on airliners.net for several years.

For his love for Boeing, the influencer who took a safari trip in Kenya commented on his IG, “I flew with KQ B787 from Nairobi back to Dubai last week. I love Kenya and it’s very friendly people. I also love the KQ livery and its good service onboard. However, the food offering has room to improve. It was quite simple. Updating the IFE and adding Wi-Fi would be a great next step
forward.“ 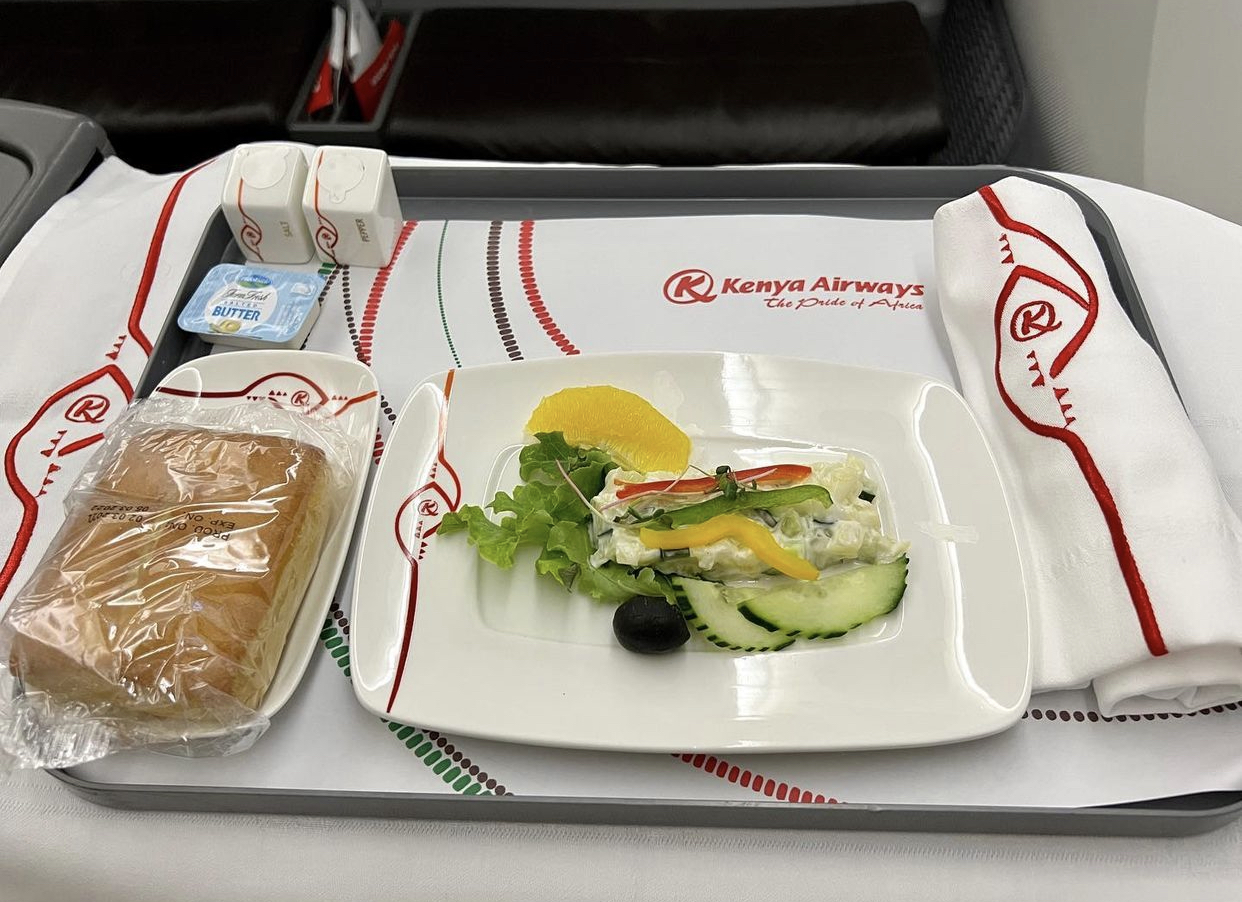 Food served to Chui that he describes as simplistic.

In a recorded video that he has since released on YouTube to his 2.9M subscribers, the Vlogger who flew on business class says the food is pathetic and not up to class.

The onboard crew was generally hospitable and good to him even the pilots allowing him to film from the cockpit.

”Sam Chui, the world’s most influential Aviation Vlogger, flew KQ from JKIA to Dubai a couple of days back and nobody recognized him, from the ground staff to the flight crew. The ground staff was particularly very rude to him. This is the most influential person in global aviation and nobody at KQ knows him? His experience was different on RwandAir, which gave him VIP treatment on his flight from Dubai to Kigali. He gave our national carrier an excoriating review on his channel which has close to 3 million subscribers. KQ is on an irrecoverable nose dive. Sad for an airline that was once the best in Africa.” Innocent Ngare, a Facebook influencer noted.

Watch the video below.

The East African aviation industry, like its counterparts globally, is having a tumultuous pandemic period. Revenue losses and reduced passenger numbers due to Covid-19 travel restrictions as well as uncertainty have hit the aviation sector hard, pushing some to the brink of collapse. Kenya’s loss-making national carrier Kenya Airways has not been spared and is in the midst of a restructuring.

In December 2019, Qatar Airways and RwandAir signed a deal in which the Qataris would invest in a new airport on the outskirts of Kigali. Qatar Airways has a 60% stake in the airport, which was expected to have the capacity to handle 14 million passengers per year, double the capacity of Nairobi’s main airport.

Uganda also relaunched its national airline with an inaugural flight to Nairobi in August of 2019.

Kenya Airways is not known to have the best prices on any of its routes, and RwandAir has been exploiting that with its direct flights between Entebbe and Nairobi.

Kenya Airways has the most expensive tickets among airlines operating in Africa, charging more on average than carriers such as Ethiopian Airlines, South African Airways and Air France. A 2021 study by competition authorities representing a total of 24 African countries showed the national carrier risked losing market share to cheaper rivals like Ethiopian Airlines and new entrants, including RwandAir and Uganda Airlines.

Chui did a review of RwandAir and was quite positive.

In August 2020, just four months on the job as the airline CEO, Allan Kilavuka shared his growth plan for the national carrier post Covid-19 and he noted that the target was to reduce the company’s overall total fixed costs – not just staff costs – by about 50% in response to their revenue projections.

The reduction in losses was helped by the diversification of the business into cargo and charter flight operations as passenger numbers shrank.

In 2020, the Kenyan government said it was opting to take over the airline by buying out the minority shareholders.

The government owns 48.9% of the airline, with a consortium of lenders holding 38% and Air France-KLM controlling 7.8%.

In September 2021, Kenya Airways chief executive Allan Kilavuka said nationalisation was not a panacea, but only part of the reform process.

Two years after the nationalisation plan was announced, the government scrapped the plan to fully nationalise the carrier in December 2021. It now plans to oversee the restructuring of the airline without taking it over.

According to the IMF, it will cost a projected $1bn to restructure Kenya Airways. It argues that more financial backing from the government will be “unavoidable”.  Nairobi has already issued guarantees for $750m of the airline’s debt.

“The authorities do not intend to nationalise the carrier and are considering appropriate mechanisms to protect the exchequer’s financial interests during the restructuring process,” IMF said.

Analysts say Kenya Airways needs a radical overhaul of its business model, given the challenges threatening the aviation industry in the post-pandemic environment, the IMF said. Changes required include cutting back on operations and staff, enhancing efficiency and renegotiating leases and suppliers’ contracts, it said.

Recently, Kenya Airways and South African Airways signed a memorandum of cooperation with the long-term goal of launching a pan-African airline group.

Both Airlines said the pact will enhance mutual growth potential by taking advantage of the strengths of the two carriers’ hubs in Johannesburg and Nairobi.

The companies say the pact will improve the financial viability of the two airlines. Customers will also benefit from more competitive price offerings for both passenger and cargo segments.

“This cooperation aligns with Kenya Airways’ core purpose of contributing to the sustainable development of Africa and is based on mutual benefits,” the airline’s chairman Michael Joseph said in November 2021. “It will increase connectivity through passenger traffic, cargo opportunities while enhancing the implementation of the Africa Continental Free Trade Area Agreement.”

Both Kenya Airways and South African Airways have been making losses for years. South Africa’s embattled national carrier emerged from bankruptcy in November 2021, flying its first plane in 18 months.

In March 2022, the company recorded a 56 percent drop in its net loss to Sh15.8 billion, a significant improvement from the record Sh36.2 billion net loss the airline recorded in 2020 on the back of global travel restrictions owing to the outbreak of the Covid-19 pandemic.

This saw revenue for the year increase 33 percent from Sh52.8 billion to Sh70.2 billion as the number of passengers grew 25 percent to 2.2 million, while cargo ferried also grew 29 percent to 63,726 metric tonnes.

Kenya Insights allows guest blogging, if you want to be published on Kenya’s most authoritative and accurate blog, have an expose, news TIPS, story angles, human interest stories, drop us an email on [email protected] or via Telegram
Related Topics:Kenya AirwaysKQSam Chui
Up Next