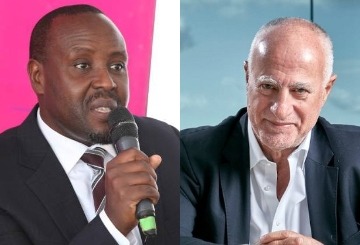 “Despite service of the orders KQ has refused to grant access to AFEX and the CEO and Chairman are likely to be cited for contempt of court orders if this continues,”says African Express lawyers.

Captain Bulhan says their workforce have been unable to access AFEX facilities due to an ongoing legal tussle between Kenya Airways and 748 air services over a parcel of land owned by African Airlines International.

“We are unable to access our premises on L.R. No.9042/584 because KQ has denied us access even after the court order was given,” said Captain Bulhan in the letter.

On August 5th 2021, AFEX obtained a high court order directing KQ to allow AFEX use the KAA gate at the Airport North Road. AFEX argued that it was not party to the lower court matter filed by Kenya Airways against 748 Air services but the national carrier visited its premises on July 23rd 2021 with its agents to vandalize offices.

“Pending the delivery of the said ruling, the defendant shall on a temporary basis restore the plaintiff forthwith into L.R. No. 9042/584 and shall ensure that their agents, contractors, employees and workmen vacate and remove themselves from the premises  immediately and unconditionally,” said Justice S. Okong’o in the order.

The court ordered against any acts of disobedience and non-observance until it makes a ruling on the matter in September, 23rd, 2021. Failure to observe the orders, it said would attract penal consequences.

“It is on this background that we are requesting JKIA to facilitate an independent gate to enable us access our premises on L.R. No. 9042/584,” said Captain Bulhan.

African Express Airways has even pleaded with the airport’s authority to allow it pre-finance construction of the independent gate upon approval.

In another offensive, Kenya Airways has repainted 748 Plaza in continued defiance of court orders.

This followed a legal suit filed by the airline against Kenya Airways for malicious damage of its property worth millions of shillings and harassment of employees.

In an affidavit dated July 26th, 2021, 748 Air Services Managing Director, Moses Mwangi said the raid had disrupted normal operations at the Embakasi office and left the airline with significant losses.

Following the incident, 748 Air services personnel of over two hundred (200) employees were unable to access the same premises and could not be able to trace important documents, records and machinery.