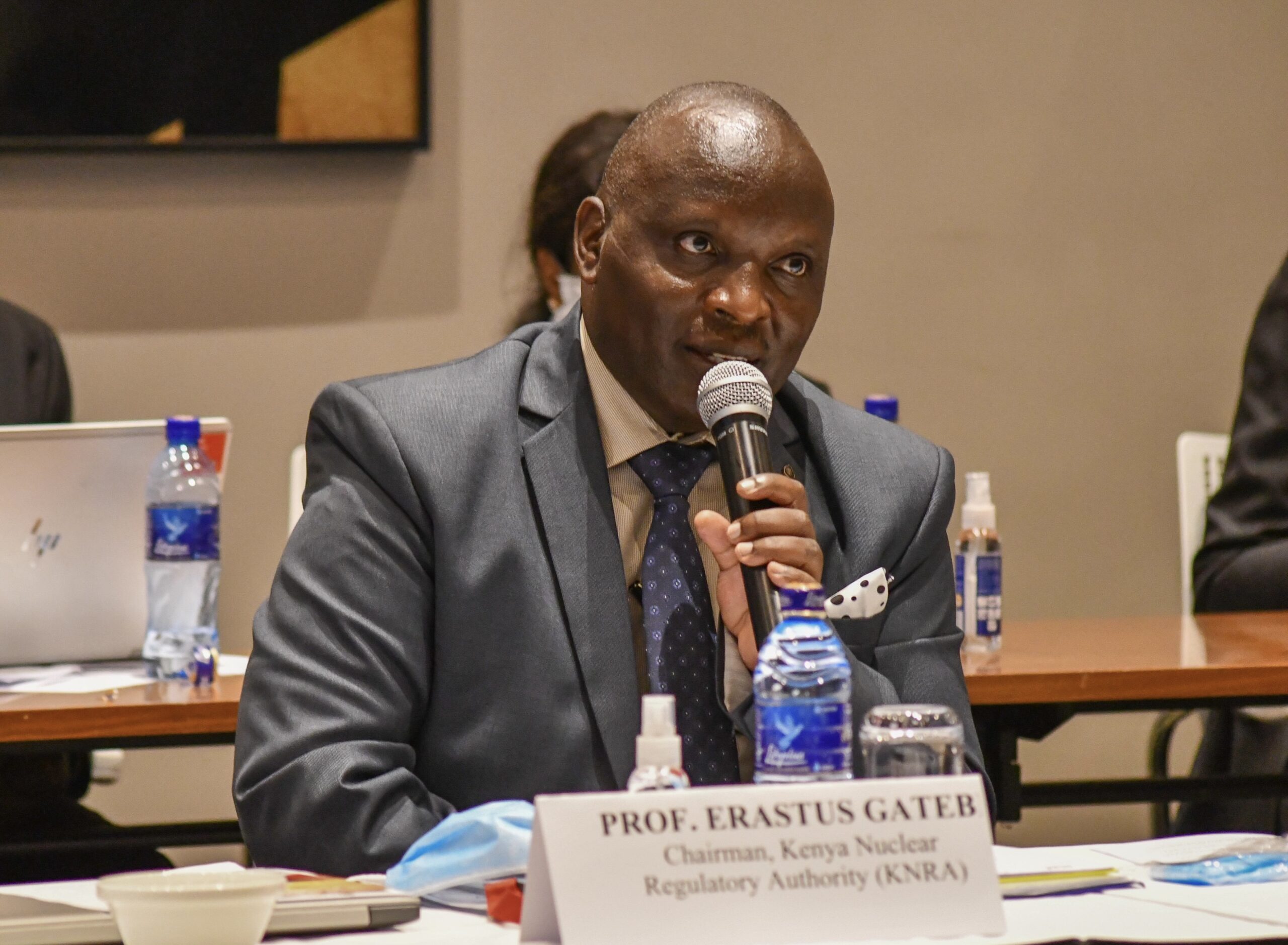 Erastus Gatembe Gatika, the Kenya Nuclear Regulatory Authority Chairman has come under fire for refusing to vacate office and irregularly extending his reign. Gatembe’s three-year term ought to have ended on February 8 2022 but has refused to vacate office on claims that his term has been extended for an extra three years making it his third term. This contradicts the requirement for board members in government institutions not to stay in office more than two terms.

The matter has now dug deep leadership wrangles between its board of directors over what insiders say to be serious mismanagement, and persistent power jostling over the regulator’s monies and begging international opportunities.

Gatembe was appointed in 2016, and his second and final term extended in 2019, despite protests from various stakeholders in the industry, including employees over what they termed as poor leadership and mismanagement.

The chairman runs the authority as his own business enterprise, raising eyebrows among stakeholders and members of staff who’ve already nicknamed him ‘a dictator’ whose sim is to being down the government owned parastatal and whose mandate (parastatals) cuts across many sectors of the country’s economy, including health and environment.

The authority changed its name recently from Kenya Radiation Board to the current Kenya Nuclear Regulatory Authority, with a clear mandate of regulating peaceful use of ionizing radiation, ensure protection of occupationally exposed worker, patients undergoing medical radiation procedures, members of the public, and the environment from the harmful effects of ionising radiation while at the same time ensuring that the society enjoys optimal social economic benefits.

The authority is the designated national regulatory authority for radiation protection, nuclear security and nuclear safeguards and secure management of radioactive waste.

Prof Gatembe formerly the director of Kenya Industrial Research and Development Institute was in 2013 involved in leadership wrangles which threatened to derail the country’s Vision 2030 Development Agenda.

At KNRA Senior Managers and Staff are fed up with his leadership and hoped he would be out of the organization on the end of his last legally allowed term and are now in disappointment following the extension.

They’ve been undergoing I’ll treatment under the professor’s skewed leadership where his words are claimed to remain law.

According to them, any employee opposed to the chairman’s leadership style is threatened with outright sacking and interdictions.

The rogue chairman has allegedly overturned the authority’s management by turning to be an executive chairman with sweeping powers of running even daily operations of the organization, rules supposed to be played by the Director General and his Senior abs middle level managers.

KNRA Director General is said to have been left in the dark concerning daily operations of the authority including collection of fees currently being charged on stakeholders particularly hospitals importing and using radioactive equipments.

Professor of Analytical Chemistry and former lecturer at JKUAT, he’s known to regularly fly from Nairobi on a first class ticket and picked on fuel guzzler cars at the expense of the taxpayer when going to attend his duties in Mombasa.

A member of staff says their plights started from the time the prof’s appointment was renewed in 2019.

While Boeing to ensure change comes in the authority, the aggrieved staff accused their chairman of promoting illegality and arbitrary abuse of workers’ rights while involving himself in supervision of middle level managers contrary to the law as well as, without respect and openly confronting them thus creating fear and anxiety among staff.

He’s also accused of having the tendency of threatening staff with sacking while claiming that ‘the board has said’.

In disregard to the constitution, Gatembe has allegedly engaged himself in employing his friends and relatives without following due process that requires competitive filing of vacancies and fairness in recruitment.

The cronies are then promoted as quickly as possible to Money minting departments including accounts and operations, with an sim of fleecing the authority of millions of shillings being collected daily and directly.

According to sources, the said fees are generally being charged to hospitals for X-rays, cancer treatment machines.

The professor recently absorbed 20 casual employees into the authority whose headquarters is in Mombasa, according to source privy to the KNRA management.

The casuals, all from one tribe were allegedly sourced from his home village in Ruiru and promised permanent jobs soon.

Others employed under mysterious circumstances include Stacy Wangare, a junior officer seconded to him from the ministry of interior who is currently serving as director of administration and planning.

Meanwhile, a Mombasa based human rights activist has already lodged a petition seeking for cancellation of the illegal extension of the professor’s term in the office for more than two terms.

Morris Orient the programme director for Kenya Legal Defence Fund, a human rights defender in Mombasa through his petition, demanded that the Health CS to come clean on the issue of the reappointment of the professor.

He said the organization would soon head to court to demand justice for KNRA workers whose rights were being violated through the chairman’s rogue leadership.

Kenya Insights allows guest blogging, if you want to be published on Kenya’s most authoritative and accurate blog, have an expose, news TIPS, story angles, human interest stories, drop us an email on tips.kenyainsights@gmail.com or via Telegram
Related Topics:Erastus Gatembe GatikaKenya Legal Defence FundKenya Nuclear Regulatory Authority
Up Next