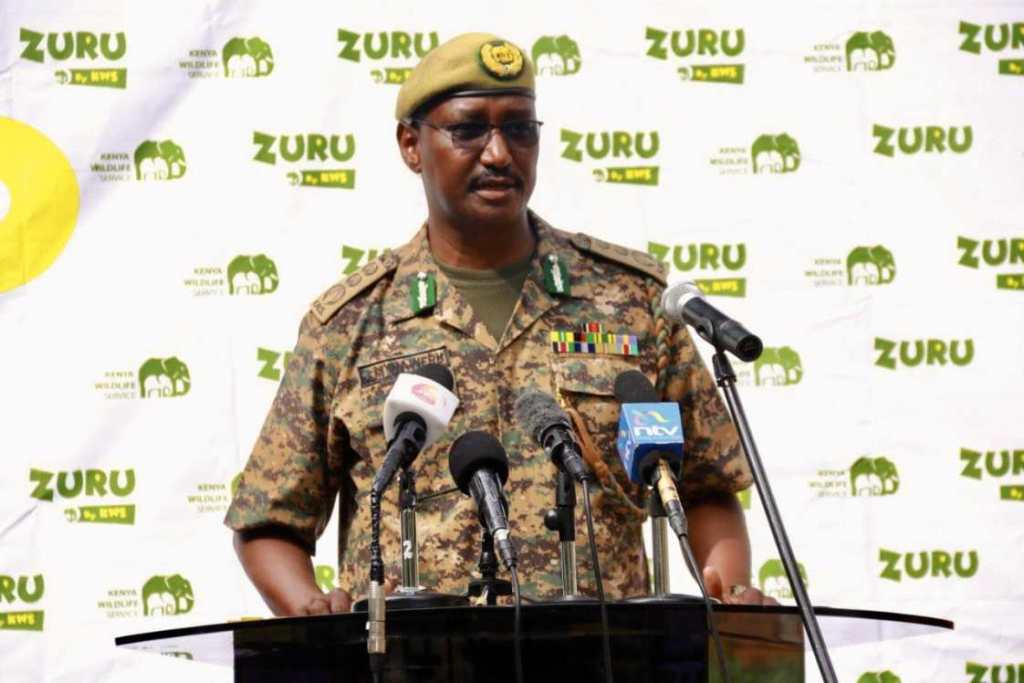 KWS Director General John Waweru has come under fire after he landed at the Standard Group HQ for an interview at KTN.

The news was shared by the media group who posted the landing on their pages.

KWS Director General John Waweru lands at the Standard Group HQ for an interview at @SpiceFMKE and @KTNHome_ pic.twitter.com/Cl8BBIh1ig

With knowledge that it was funded by taxpayers, Kenyans online reacted harshly to the development coning at a time when Kenya is struggling with huge debts that’s weighing down the economy growth.

“Kshs 500K misappropriated by KWS Director General John Waweru to fly from Langata Road to Mombasa Road, a distance of less than 20km for a TV interview. It would have taken him 20 minutes by road at Kshs 1K for fuel. He should be fired and surcharged for the cost of the airlift.” Wrote Nelson Havi, former LSK President.

“This is an absolute wastage of public money and resources. He should have just taken a vehicle through the bypass. Standard Media won’t call him out because he was going to their platform. This is sad!” Blogger Robert Alai said.

“Astounding…astonishing! Gotta get the civilian out of the recruit; have to instill discipline! BTW, basic leadership principle in the Marine Corps: Officers Eat Last!” Andrew Franklin added. 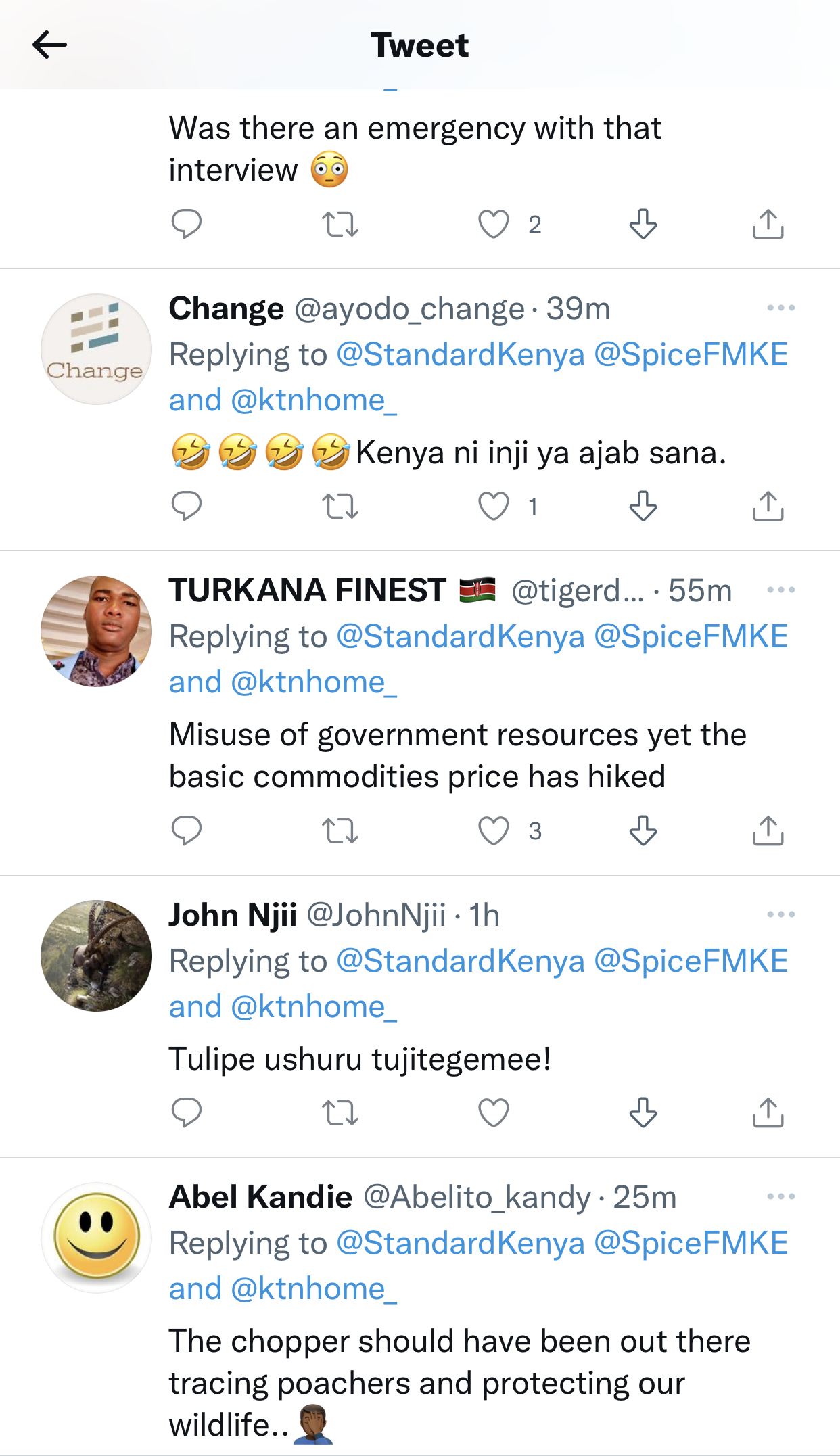 Some of the comments.

Following the backlash, KTN made a clarification in a bid to salvage the situation claiming that the DG didn’t fly from the Lang’ata office instead was flying from Nakuru to Nairobi where he was on official duty before landing at the Standard Group HQ for a brief interview. Too little too late. Misuse of public funds is rampant with state officials who burden taxpayers with avoidable and unnecessary bills.

The KWS well-connected Director General of Kenya Wildlife Service Brigadier (Rtd) John Waweru was also a direct appointee of President Uhuru Kenyatta. Waweru was appointed to this position on March 13, 2019.

The rot at KWS is so deep that when State House instituted secret audit which exposed poor leadership, costly inefficiencies and capture of board by a section of management led DG Waweru and his loyal right-hand -men  — Edwin Wanyonyi; the Deputy Director Strategy & Change, HOD Procurement Mr Wambua and HOD- Roads Mr Eng Walter Ochieng.

The four senior staff had been linked to corrupt dealings at KWS through phone and bank records as well as an intricate investigation into their social circles.

Waweru micromanages Road Maintenance Tenders (KWS receives substantial cash injection from the Kenya Roads Board for maintenance of roads within national parks and game reserves) with Engineer Ochieng who had developed a list of preferred contractors and suppliers most of whom the audit revealed were proxy companies they had shares in through relatives and associates. 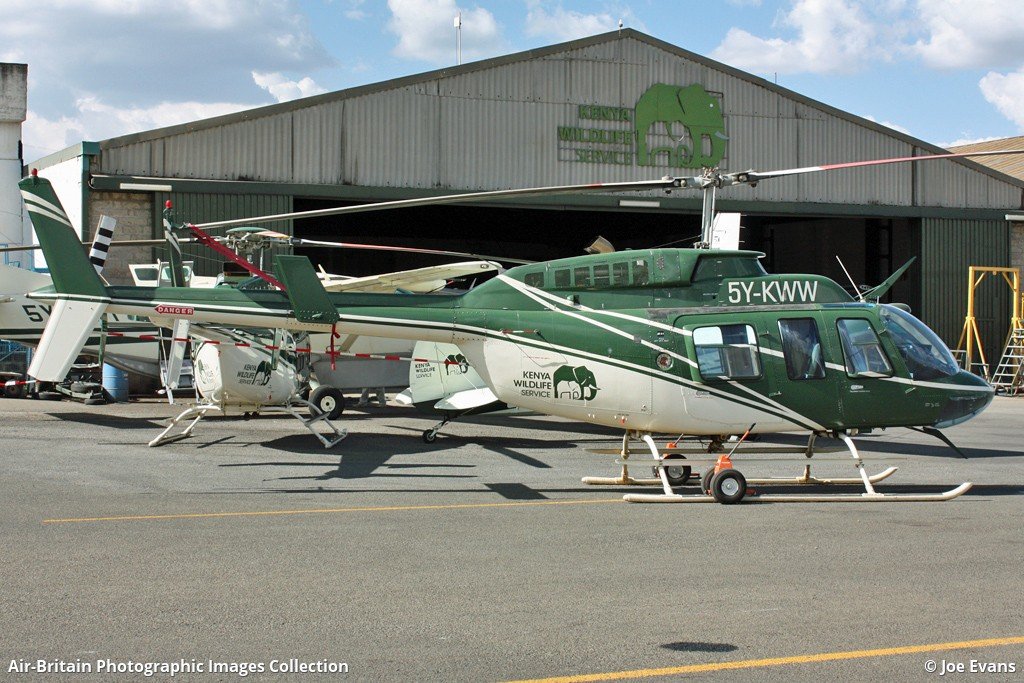 KWS Choppers are majorly meant for surveillance and protecting the wildlife.

The tenders were sub-divided and evenly distributed to the preferred suppliers. The DG Waweru who also acts as Corporation Secretary at Board level often blackmails Board members in the name of the President hence placed figureheads in all the main three board committees of finance, conservation and audit rendering all internal controls his tools of manipulation like in a military Barack.

In one controversial incident, Waweru managed to persuade the Board sanction the contract to build a new luxury residence inside the serene Nairobi National Park for himself as the Director General at the cost of Sh31 million.

This particular tender was awarded to a waste collection company suspected to be linked to the DG by proxy and one that has no experience in construction of buildings nor architecture nor design.

He’s also been alleged to be a womanizer “Even worse are an open secret that he has relationships with various women at KWS including the Head of Legal and Head of Security.“ Kenyan Report blogexposed. The state of affairs at KWS deteriorated so bad that disenchanted staff resorted to colluding with poachers thereby undermining wildlife conservation which is a core mandate of the KWS.

Confidential documents where the KWS employees were being forced to sign the trash documents in order to commit and agree that they won’t leak any information to the public in a bid to contain the crisis.

‘An employee shall not, under any circumstances, communicate with the media either in writing or by granting interview and making statements on matters affecting the Service programs or policies without the specific authority of the Director General. Where such authority has been obtained, the employee shall communicate with the press through the respective Divisional Head’, part of the new code of conduct stated.

‘Consequently, attached herewith please find an extract of the Service Code of Conduct to be signed by every employee under your jurisdiction. After signing, a copy is to be returned to this Headquarters for record purpose while the employee shall retain the original for reference’, the letter from Waweru stated.

Related Content:  KRA under the radar of East African Court of Justice.
Kenya Insights allows guest blogging, if you want to be published on Kenya’s most authoritative and accurate blog, have an expose, news TIPS, story angles, human interest stories, drop us an email on tips.kenyainsights@gmail.com or via Telegram
Related Topics:DG WaweruKenya Wildlife Service (KWS)
Up Next