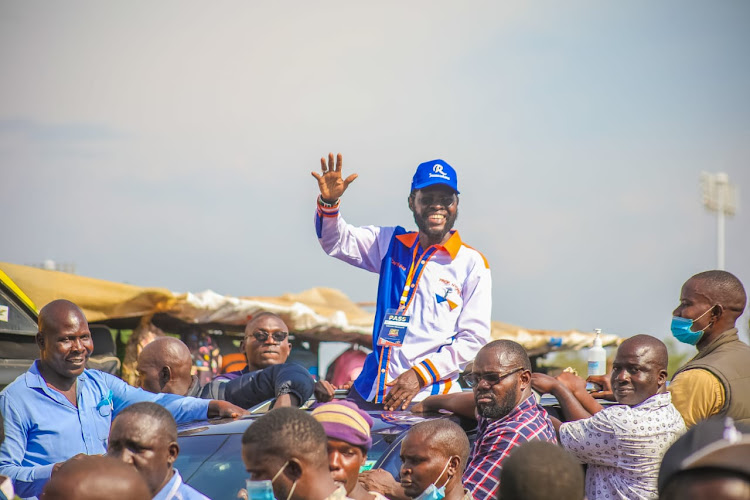 Kisumu Governor Anyang Nyong'o after attending county ODM delegates meeting at Tom Mboya Labour College in Kisumu on Monday. He was endorsed by the delegates for re-election. Photo courtesy.

The delegates declared that governor Nyong’o will be their flag bearer for the position signalling that there will be no nominations for the gubernatorial seat in the county.

The delegates backed Nyong’o based on the projects, he initiated during his first term in office saying he deserved a second term to complete the projects.

Speaker of Kisumu County Assembly Elisha Oraro led in the declaration when he presided over a motion tabled by Majority Leader Kenneth Onyango, who sought the delegates’ approval of the proposal to field Nyong’o as the ODM flag bearer in the August 9 general election.

This means Nyong’o therefore shall be given a direct ticket to vie for the second term.

But the move is likely to set ODM leadership on a collision course in the coming days after a section of the party members endorsed former Chief Administrative Secretary for East Africa Community Ken Obura to face Nyong’o in the party primaries.

Obura termed the endorsement as an affront to democracy saying people should be let free to pick leaders of their choice.

“It is now appearing as if ODM leadership is imposing candidates on the people instead of allowing them to pick leaders of their choice,” he said.

Obura also dismissed Nyong’o’s endorsement terming it ‘skewed’. “The endorsement was pre-planned and we won’t accept it. It’s not binding to all. It’s skewed and we shall take the protest to the party headquarters’ doorstep,” he vowed.

Kakamega governor Wycliffe Oparanya, however tactfully told Nyong’o that he will receive full backing after nominations perhaps distancing himself from the open endorsement.

Kenya Insights allows guest blogging, if you want to be published on Kenya’s most authoritative and accurate blog, have an expose, news TIPS, story angles, human interest stories, drop us an email on [email protected] or via Telegram
Related Topics:Kisumu Governor Prof Anyang’ Nyong’oKisumu Senator Fred OutaODM partyParty nominations
Up Next

To Run Or Not, Waluke A Convict Case That’s Becoming A Problem

I Have Been Betrayed Enough , Kalonzo Says He Won’t Be Forced Into A Hurried Deal