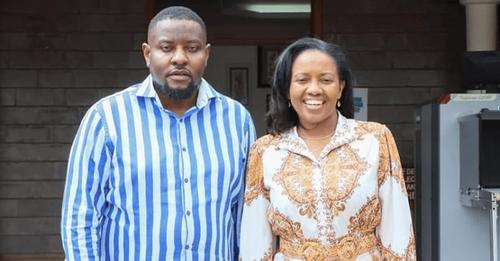 Samuel Mburu Kamau the husband of Nakuru Governor Susan Kihika is aiming to become the chairman of the board at Kenya Ports Authority according to the grapevine. The controversial businessman has reportedly been bragging to everyone who cares that he’s poised to be appointed to the board by President Ruto whom he claims to be enjoying close relations with.

Mburu is also said to have been amongst the key financiers of Kenya Kwanza campaigns and is banking on this to be awarded with the lucrative position.

It’s in the backdrop of this that Mburu has allegedly been using to lobby for jobs to his Landmark Freight Services Limited at the Mombasa port. Some disgruntled traders are alleging that he’s threatening to punish those who don’t want to use his company once he ascends to the position.

In 2019, the businessman was under the Directorate of Criminal Investigations (DCI) radar for allegedly evading taxes totalling KSh 64 million. Mburu was accused of colluding with Kenya Bureau of Standards (KEBS) officials to undervalue goods imported from Dubai, United Arab Emirates. It is alleged that they tried to conceal import goods of nine containers of 20ft beach containing total 12060 of 20 litres Hayat palm olein brand of cooking oil, which was to attract tax of Sh6 million, by falsely declaring the said goods as machinery which attract lesser tax.

It is alleged that between the 25th of January 2018 and 29th day of January 2018,within the republic of kenya, being public officers employed by the Kenya Bureau of Standards as inspectors ,committed a breach of trust affecting the public by unlawfully releasing uninspected and unverified 9 containers of 20ft.

Watene and Thuo Chuphi are accused connived to conceal consignment of imported goods by fraudulently declaring them as machinery an act intended to defraud the government of Kenya revenue.

It is alleged that Samuel Mburu Kamau, George Gikaru Kamau ,Ibrahim Twahir Mohamed, Harrison Ngigi Muchiri, M/S Landmark Freight Services Limited, Wycliffe Lukalo Tradingas Gendipe Enterprises between 24th January 2018 and 29th January 2018, within Nairobi county, jointly with others not before court, connived to conceal consignment of imported goods to wit 9 containers of 20ft each containing containing a total of 12,060 jerricans of 20ltrs each of hayat palm olein brand cooking oil vide custom entry 2018NBI1629712 by fraudulently declaring them as machinery an act intended to defraud the government of Kenya revenue.

The state also seized 400,000 bags of sugar from Landmark Freight Services that they had imported during the exemption period granted by the Treasury. This was on the suspicion that the sugar was poisonous and unhealthy for human consumption.