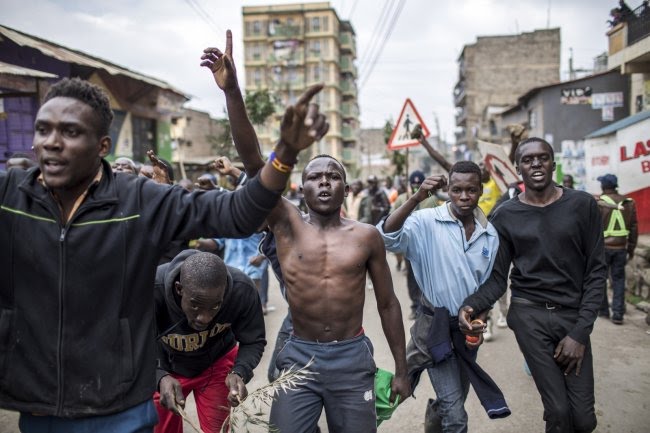 Supporters of Raila protest in the Mathare slums of Nairobi

Former Chief Justice Willy Mutunga sensationally claimed that Kenya had become a bandit country run by ruthless cartels. Dr Mutunga said Kenyans are at war with mafia-style cartels run by political bosses and corrupt business people. He said the nation’s mafia-style criminals are similar to Al Capone’s mob in the 1920s in America, and that this “cartel collects millions every day”.

He cited the police saying officers who extort bribes from motorists must share the booty with the head of the local station, who in turn shares the money with superiors possibly all the way up to police chiefs in Nairobi.

Larger cartels, he explains, make money through trafficking illegal migrants, counterfeit money, weapons, drugs and consumer goods. “The influence of the cartels is overwhelming. They are doing illegal business with politicians. If we do not fight the cartels, we become their slaves. But leaders who do take on the cartels must be prepared to be killed or exiled,” said Mutunga. The CJ cited the more than Sh300 billion Standard Gauge Railway contract the State signed with a Chinese state enterprise in which the bid was limited to a single company.

Are these powerful cartels going to challenge the state itself?

“What happens now in Kenya with corruption has become a very serious war between cartels. Whenever there is a change of government, some cartels benefit and others lose out. And those that lose out don’t go out quietly. And that is where the judiciary comes in because the losers come to court and say: ‘under the constitution, this tender for the railroad did not have public participation, it was single sourcing, it was corrupt’.”

Mutunga gave another example. The Kenyan army has been combating the Islamist militant group al-Shabaab in southern Somalia since 2011. And this fight is not without its individual winners. A smuggling ring controls the Somali port city of Kismayo according to a UN report, and a recent publication by Journalists for Justice reveals that under the protection of the Kenyan army, traders (some with links to al-Shabaab) smuggle all kinds of Asian electronics, sugar, food, and drugs into Kenya. The scam reportedly yields between one and two million dollars every month. “When a racket as in Kismayo prevails, what is the role of the state?” asked Mutunga.

The revelation by Mutunga hinted at the bigger picture of the shadow outfit that literally runs this country from the background. These are the people who call the shots and yet they’re faceless, they use politicians and funds all their activities just so as to stay afloat. A change of government would mean the existing network is displaced and this is why the shadow racket will fight blood and tears to remain in the system. They’ll heavily fund campaigns, buy justice whatever it takes. 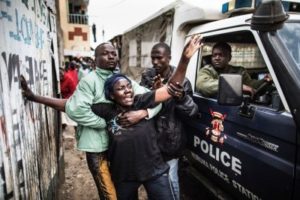 The mother of a man shot in the head allegedly by Kenyan police reacts as she passes a police van transporting her son’s body.

There are these individuals engraved in the system and are not willing to let go of power from the Jubilee administration as there’s no guarantee of survival in a NASA or any other government. To ensure survival, this faceless, powerful network will do everything to ensure their preferred set wins the election. Welcome to the age of electoral authoritarianism.

Related Content:  Where Do The Corrupt Governors Get All The Millions For Cash Bail, Unanswered Question

Ballot stuffing in the crude traditional manner no longer happens but systemic irregularities across all aspects of the electoral process now guarantee that the integrity of the election as a whole is compromised.

In a back-handed way, these shenanigans are a compliment to the moral force of democracy. Even unrepentant autocrats want the sacrament of the franchise. They know that blatant theft of the vote will not fly in these censorious times, so they have crafted new ways of conducting “soft coups”. Each irregularity is parcelled out in moderation: violence must be low intensity, not so intimidating as to stop voting altogether. And though technology could fail, it must not fail so catastrophically as to undermine the election. In short, failures must be such that international observers can plausibly conclude that the “elections substantially reflect the will of the people” and for judiciaries to judge that “the irregularities are not substantial enough to affect the result.”

Kenya has been sent back to a fresh election after the Supreme Court nullified Uhuru’s win. IEBC was found guilty of having run a complete scam presidential election. While you’d expect all team players to gang up against the electoral body for having bungled the election, the case has been unusual. Jubilee has resorted to pointing fingers elsewhere; Judiciary, Civil Society and all time favourite scapegoat Raila Odinga but IEBC. While NASA is insisting the next election set for 17th October cannot take place with the same outfit that flawed the previous poll, Jubilee is up in praise and have endorsed the Chiloba led team, the same accused of massive tampering of results.

The fact that as a country we have to discuss whether to have a free and fair election is a clear sign of the moral substandard in the country. The Inner state’s hand in these wrangles cannot be seen but easily felt, these people are everywhere and you can bet they have the ‘independent’ IEBC by their balls. Their interests must be met at all costs. The politicians are just playing to their strings. Now if you look deeply into the problem that we have them it is the state capture, elections are just a formality to them to keep eating.

Weak state structures in African countries create space for criminal networks to operate, especially when these groups operate along ethnic loyalties. Cartels collaborate with politicians and military leaders, gaining huge influence and sometimes overshadowing the government itself. Lawyer Ahmednasir who’s a system’s person, once on JKL told Kenyans to give up the fight on corruption as it would change nothing. Grand Mullah was alluding to the fact that the corruption cartel is too powerful and undisturbed by anti-corruption crusaders.

President Uhuru at one point admitted to having been held a captive by the inner state, though not directly but that was a public confession of the captivity that many didn’t get. “Munataka nifanye nini” Mr. Kenyatta said he was helpless to fight corruption what he really meant was that the inner state was too ruthless and powerful for him to contain. 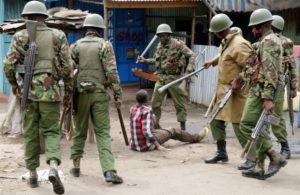 Anti riot policemen beat one of the protesters to disperse them in Mathare, in Nairobi
THOMAS MUKOYA/REUTERS

As long as these elements will exist and their system maintained then Kenyans should brace for yet more intrigues.

Two phrases stuck in my memory during the 2008 post-election violence crisis: political elites and ruling elites. By the time Kofi Anan was taking a walk around the central park to cool off from the negotiations, I had made my conclusions on the two groups the western government representatives were calling upon to find a solution to the crisis. The elected political elite can look like they are wielding power but the real power is always with a small cabal of shadowy, rich and influential figures – the ruling elite.

In the case of 2007 elections, it was evident that the ruling elite had realized too late that power was going to Raila Odinga, whom they did not have influence over.

Related Content:  Ruto’s Predicament In Jubilee Party Is Not An Isolated Case

At the last minute, they must have held a meeting and agreed to prevent Raila’s ascent to power at whatever cost. What transpired next is fodder for a good thriller movie, with a horror ending. The whole fiasco watered down my belief in the democratic ideal of one-man-one-vote and the rule by the people for the people.

The reality that a small group of people can decide if I will take over power or not even if I win at the ballot disturbed me about the future of our country.

The resultant coalition government did not make matters any better, as the hand of these unseen yet known fellows could be felt behind the numerous feuds between the ODM and PNU sides of government.

In 2013, the system was very cautious not to repeat the mistakes of 2007. Though the Coalition for Reforms and Democracy (Cord) was sure the tally had been tampered with, they did not have evidence. Cord lieutenants later came to the point of accepting that even if Uhuru won, the vote was inflated to avoid a run-off thus giving him an eight thousand vote above the fifty percent threshold.

The one paragraph ruling by the Supreme court, and further “accept and move on.” the campaign in the media was a clear show of a ruling class that was prepared to keep Raila out of power without leaving any Tracks of their actions. The current onslaught in the judiciary, civil society, and Raila in a character assassination quest by Jubilee is not by chance but coordination most probably orchestrated by the shadow community.

Nairobi Law Monthly Magazine once said, “Raila may win the popular vote, but no one is willing to hand over the instruments of power to him. Leaders like Raila come to power through civilian coups, but the man is too obsessed with good governance. The only the thing that has changed since 2008 is the Constitution.” This is to say the system doesn’t want clean hands but someone they can play dirty with. So while we might think our problem is Chebukati and Chiloba, they’re actually least of the problems as we have the bigger problem in play. These guys are everywhere and running the Kenyan economy, from the security to judiciary, they’re firmly placed. State capture is not a myth.

The Deceit In Numbers On The Presidential Election In Kenya