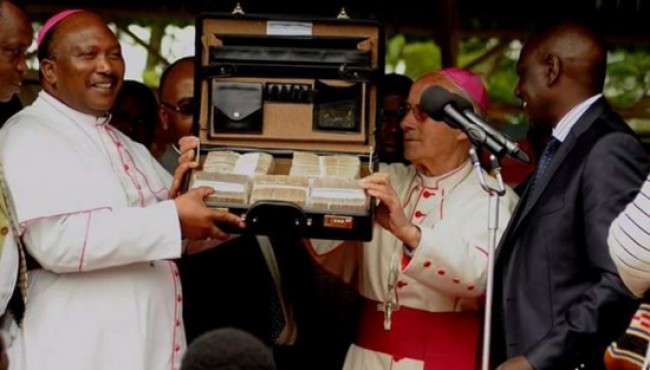 Politicians have discovered that many Kenyans worship in churches and believe all that is said and preached there. They have therefore devised ways of befriending the worshippers. One of these ways is attending harambees and donating huge amounts of money there. This has consequently made the religious leaders shy away from criticizing the politicians’ lifestyles and their leadership style because of those donations.

Where are the likes of the late Bishop Alexander Muge, Archbishop Ndingi Mwana’a Nzeki and other vocal church leaders who made authorities toe the line? Particularly in this looting era, a cleric receiving such amounts without even enquiring the source is a bad idea. It is the high time that churches started cash-generating activities. The churches should establish schools, colleges, universities, hospitals, farms and bookshops. This will help them stop begging donations from politicians.

Kenya’s current public debt stands at a disturbing 3.7Trillion amount that it’s the taxpayer who’ll have to bare the burden. Corruption cases have infiltrated the media spaces with everyday a new scandal and billions lost in the government ministries. The opposition has been playing its whistleblower role and at the same time facing the wrath of government proponents.

The GDP has been indexed as rising, but there’s less or nothing to show as ripple effects, companies have in recent times closing down or downsizing taskforce. Unemployment has clocked highest points with millions of youths left without employment. Corruption is largely to blame for snatching opportunities for the fresh talents that are now idling. NYS scam that has left economy robbed of close to 7B was a perfect avenue that would have created millions of job opportunities but was mauled by the carnivorous leadership.

As gluttonous leadership pounce on public funds driving Kenya to it’s knees and licking the bones dry, the church who naturally have the moral authority to call out the nyama eating spree crumbling the country has resorted to a resounding silence.

Instead, the clergy has turned the church into a money making space and rather a money laundering lounge where the politicians find a haven to cleanse their dirty money without any suspicion. The church has become the perfect devil that we know.

The church is silent when vigilant Kenyans question whereabouts of lost public funds and wait to receive bundles of notes in millions from the same politicians being challenged. One can easily say the church is part of the corruption cartel eating up this country. I’m yet to see a church that has turned down offers from politicians and better yet questioned the source of such massive amount of money. The real team mafisi of money don’t hesitate to question.

In a shocking event over the weekend the President Uhuru and DP raised 34.5M each hard cash in a church Harambee. Where do you think this money came from? Your guess is as good as mine. But the church as you guessed it clapped and received it with open hands. Ruto is known for splashing millions every weekend in harambees and anyone who date question his sources is slapped with big tackles. In this particular Harambee, DP’s PA who’s on NYS scam records taking a small loan of 1.5M suddenly is rich giving donations of 3.4M in the harambee. Clergy no longer perform miracles in churches, politicians do.

When everything is going wrong in this country, the country bleeding to bear death and the clergy remain tight-lipped because they’re compromised, they lose relevance and start serving earthly gods instead of the almighty. God must be very disappointed with the money loving Kenya clergy who would rather spend weekends at The golfing club sipping whiskey instead of visiting church members in their homes. Clergy who’d rather drive too if range cars than driving the divine message of God home.

Not speaking up against numerous vices ailing this country equals to endorsing them. We have had a partisan clergy, polarized and will only speak when their divide is under attack. We have asses for clergy. Kenya being a religious country, we’re stuck with the devil we know. True clergy is dead.