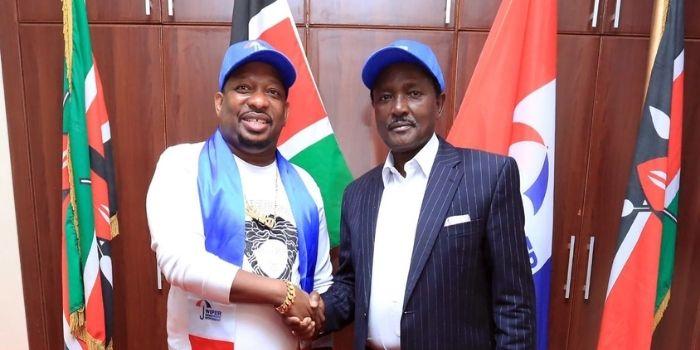 Sonko was handed the ticket by Wiper leader Kalonzo Musyoka in a small ceremony held in Nairobi almost two weeks after the Musyoka-led party cleared Sonko and submitted his name to the Independent Electoral and Boundaries Commission (IEBC).

After his entry into the Mombasa race race, the controversial politician was expected to face off with Kisauni MP Ali Mbogo in nominations but Kalonzo managed to broker a deal that will have Mbogo deputize Sonko.

TThe move now sets stage for Sonko to battle it out against Mvita MP Abdulswamad Sharif  Nassir (ODM) and former Mombasa Senator Hassan Omar (UDA) who are both eyeing the top seat in the port city.

Sonko-Mbogo ticket is considerebly strong since Mbogo comes from the Mijikenda community which is the largest in the ccoastal region. He is also the sitting in MP in Kisauni which is th most populous constituency in Mombasa County.

The battle to succceed outgoing governor Hassan Joho has seen many aspirants scrambling for Mijikenda community vote which is distributed across the six sub-counties ahead of the August polls.

Sonko who has had a stint as the resideent of Mombasa began by endearing himself to the community by meeting its elders.

According to 2017 IEBC register, Mombasa  County has a total of 580,223 registered voters with slightly over 50% of these voters coming from the Mijikenda community concentrated especially in Kisauni and Likoni sub counties and sections of Mvita.

Experts argue that the Mijikenda factor despit the poverty levels still remains crucial for anyone seeking to be the next governor and like any previous races; Kenyan-Arab aspirants will also have to scramble for Mijikenda running mates.

Even ODM’s Abdulswamad Sharrif Nassir who will fly the Orange Democratic Movement (ODM) flag and considered a descendant of the Arab Swahili, a community regarded as wealthy with urban influence is most likey to choose a Mijikendda as his running matte to win the vote.

Both Sonko and Abdulswamad are in Azimio La Umoja coalition and one would have expected Kalonzo to shelve his party’s interests in a plac considered ODM stronghold but he is hellbent to play a spoiler card.

He is not campaigning for the Azimio presidential candidate Raila Odinga but fielding candidates in regions where vote splitting may disadvantage ODM and favor UDA candidate.

Kalonzo believes that pairing with Mijikenda gives him enough guts to take on ODM in Mombasa. Both Kalonzo and Sonko are from the Kamba community whi boasts of good numericcal figures in Mombasa.

The Kamba community is the second largest vote bloc in Mombasa county. They had initially expressed their will to throw their weight behind businessman Suleiman Shahbal who later ditched Wiper for ODM after alledging that Joho gave them a raw deal.

They claim that the incumbent who was elected on an ODM ticket has neglected them for close to a decade by ignoring their kins in county xecutive jobs.

But Kalonzo’s meddling and interferance in ODM strongholds has also been witnessed in Nairobi.

The former VP had intially reached a deal to have Wiper’s Prof. Philip Kaloki deputize Jubilee aspirant Richard Ngatia. This was despite Ngatia being tainted with looting scandals, fake degree papers and ODM having the favorite to ascend to City’s top sat in Westlands MP Tim Wanyaonyi.

Azimio has since settled to have Jubilee’s Polycarp Igathe go for the governor deputized by ODM’s Tim Wanyonyi and Wiperman Philip Kaloki has been promised the County Assembly speaker position.

Kenya Insights allows guest blogging, if you want to be published on Kenya’s most authoritative and accurate blog, have an expose, news TIPS, story angles, human interest stories, drop us an email on tips.kenyainsights@gmail.com or via Telegram
Related Topics:2022 electionsAzimioKalonzo MusyokaMike SonkoMombasa CCounty
Up Next