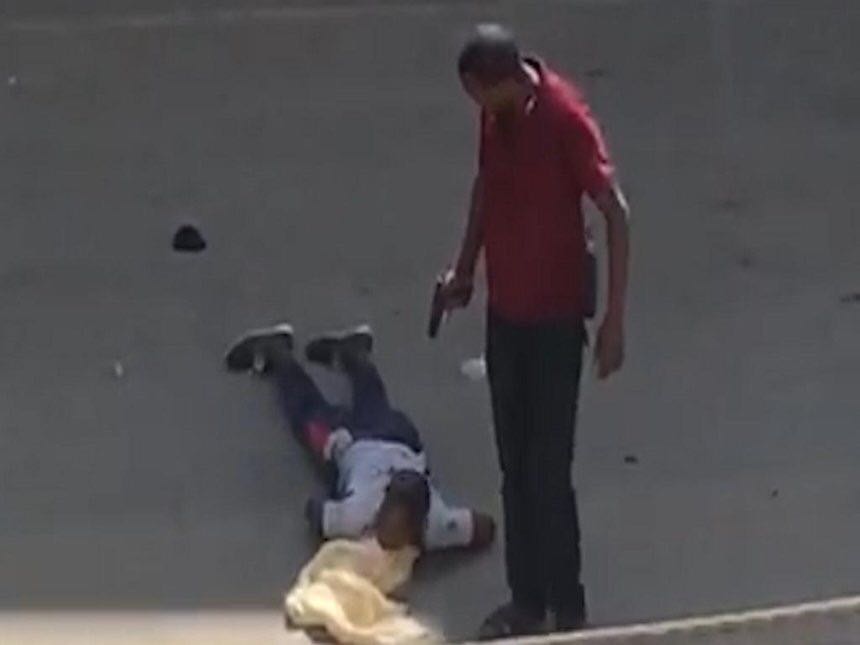 One of the most dangerous gangs in the country operates in Nairobi’s Eastleigh area. The gang, commonly known as Super Power, is almost entirely made up of young boys. Together with Gaza of Kayole and 40 Brothers based in East-lands, the Police have ranked them the top three most dangerous criminal gangs in the country in 2016.Over the years, the Super Power has committed numerous criminal activities ranging from murder, mugging, pickpocketing, and violent robbery – often stabbing their victims.

Its members roam the busy streets of Eastleigh. They mainly operate at night, although they have been known to “work” during the day sometimes.Two months ago, Abdi Aimoi Mohamed came to Nairobi to further his education but met his death in the hands of Super Power gang soon after his arrival. Aimoi was stabbed severally, turning him into a statistic among the rising number of the gang’s victims.The gang often targets mobile phones, cash, and jewelry, and spares those who yield to their demands. Sometimes, how-ever, “they just stab their victims even after they get want they want… we don’t understand why,” said a police officer who declined to be named because he is not al-lowed to speak for the Police.

Starting a few years ago, most members of the gang are said to be young children; many deported from US, UK, and other Western countries for crimes committed there. Because they wanted to continue the kind of lifestyles they had been used to abroad, many come together to form the gang to get the cash they needed. This is made worse by the fact that rehabilitation programs for misdemeanor crimes are almost absent in Kenya, which made it easy for the youth to form and join the gang.Not all of the “boys” are deported, how-ever; some of its members are those sent back by their parents to participate in the famous dhaqan celis – rehabilitation communes meant to make them reconnect with their culture. Whenever they are sent back, their passports are often confiscated to ensure they don’t travel back, thereby leaving them prone to joining gangs. The irony is that every time they are arrested for the crimes they commit, it is their parents who come to their rescue by bailing them out of jail or paying their fines. “None of them has ever faced jail time. 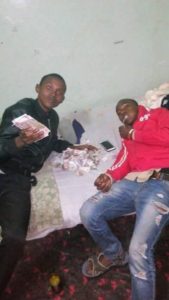 The young men ,members of the super power criminal gang who were publicly executed by the police.

These children have money because their parents are wealthy. Once you arrest them, they are quickly bailed out,” a resident confided. It also explains why they feel invincible – the system cannot hold them. Super Power is said to have been initially backed by businessmen in Eastleigh, for protection from and intimidation of rival merchants, and to eliminate competition. These soon dissociated themselves with the outfit when the gang morphed into a quasi-terrorist group. With increasing terror attacks, and as security agencies sought to establish rumored (financial) links between businessmen and terrorists, communication was cut off between the facilitators and the gang, leaving them to their own devices. Broke and desperate, members organized themselves into the gang we know today. In the course of my inquiries, I was directed to a businessman in Eastleigh who, however, declined to meet with me when he learned what I wanted. In my search to meet and speak with members of the gang, I met Mohamed, who asked to be identified only by his first name. He is in his early 20s, currently a taxi driver.

Mohamed says he is now “reformed”; he left the gang a year ago. He agrees to take me to his former “operation centre” and introduce me to his former mates. At 8 p.m., at the furthest end of the one of the streets in Eastleigh, we knocked on a metallic door. A boy, who appeared to be in his late teen years, opened the door. He recognized Mohamed, and he ushered us in. Inside, we met four other teens, including girls, inhaling from a shisha pot. After a long pause, during which they must have judged that we meant no harm, they welcomed Mohamed and me to join them. However, things almost went violent after that.

Hushed muttering between Mohamed and one of the boys, who I later learned was their leader, turned into a heated exchange and very nearly degenerated to blows when it became apparent that I was a journalist. But after a passionate stating of his case and assurances that I only sought information, they all relaxed. Jamal, the leader, then gave me a tour of the house, which consisted of a single bed, several mattresses, littered with used cigarette butt and wilting leaves of khat. Beneath the beds were two pangas and several knives. “This is what we use,” Jamal said simply. He is 23, Jamal said. He has a scar on his chin. He hails from southern Somalia, and knows only a few Swahili word. He said he is in Nairobi waiting to go to Europe. He will cross through the Mediterranean Sea. “This is just a temporary way of earning a living as I wait to travel,” he said nonchalantly of his “job” as if he were describing a game of cards. 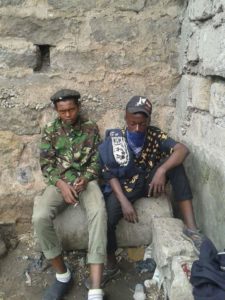 Members of the criminal gang

He commands twelve “soldiers”, two of them female. Often, they operate at night and sleep during the day. I asked why they are not working tonight and he says, “not all of us go”. Only half, or a slightly less number, will go to the streets to look for “something” at a time. “Those who went out will be with us early morning to bring what they have “managed to get” to be shared by all members. Phones are usually stored somewhere before they are “offloaded”, while cash and other valuables, like watches, are distributed among members. Some money is set aside to purchase khat and shisha, which are used by everyone in the group.

I asked Jamal to let me spend the night with them; he agreed. They have installed Wi-Fi and, during my stay, everyone, including me, was either on the phone or by the pot of shisha. At one point, when the smoke became too much for me, I asked and was granted permission to step out for fresh air. I have never been more relieved to be outside in the middle of the night. By six in the morning, no one had slept.

At 6.25 there was a knock on the door. Everyone but me recognized the entrant and immediately went back to what they were doing. An hour later, another knock and eight tired-looking boys joined us. They set about displaying their loot – phones, and cash. Sharing was done simply and without questions. How do they manage with the police on patrol all over? Jamal said the police are their “friends”, and that when they are cooperative with the law enforcers, they let them carry on their business without trouble. 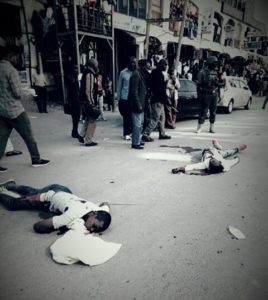 Bodies of the suspected criminal gang members lay on the ground after public execution by police in Eastleigh’s 1st Avenue.

“There is one police officer,” I started after a pause, “his name is Ahmed Rashid. He is often praised for dealing ruthlessly with the gang. How do you evade him?” “He is more dangerous and expensive than the rest,” Jamal says. “He shoots at the slightest provocation or if you defy his orders. If he arrests you, your family will have to part with a lot of money to get you out.” Jamal says Ahmed has physically assaulted him countless times. “He is ruthless. Sometimes he will arrest anyone he feels looks like a Super Power member even if they are not. He only releases someone when he gets paid.” According to Eastleigh residents, Super Power allegedly enjoys police protection.

This was evident when over 1.7 kilos of gold were stolen last year from a shopping mall in Eastleigh. Flying Squad detectives established that among the nine people involved in the robbery were police officers. When undertaking “high profile” robberies, Jamal said, the gang always alerts the police, who help them get the job done for a cut. High profile jobs include robbing malls and shops. The number of such robberies has been growing in the past year. Jamal says there is no formal agreement between the gang and the security forces. Sometimes they seem to be “cooperative” but can suddenly turn and arrest you. Cases of disappearances or killings are not unusual. At around 7:30 p.m. on July 12, pictures of what appeared to be minors lying on the ground began doing the rounds on social media.

The duo was alleged to be member of Super Power gang. Witness said the two were trailed by police and were, at some point, challenged to stop. They began running instead prompting the officers to shoot them. One died instantly and the other an hour later. It is alleged that the officers stood by the injured teen and watched him bleed to death. In most instances, parents’ claim they did not know that their children were engaged in criminal activity and that they f and such information from the police at a time when the child is either in a cell/jail or dead. Police often display “evidence” like phones and knife to show prove the guilt of the apprehended/dead teen. One woman narrated to me of how she woke up day to discover that her son had been killed for attempted robbery.

In killing I mentioned at the beginning of this story, Abdirahman Suheib was among those suspected of murdering Aimoi. Abdirahman’s family learned through social media that he had been arrested. He later died in unclear circumstances. His cousin, Ahmed, said Abdirahman spoke to his parents on the phone to inform them that four of his co-suspected had been released, and pleaded with them to pay to have him released. When he called the next day, he complained of high fever, fatigue, and loss of muscle control, symptoms the family associated with poising. His parents went to see him at once but were told their son’s body was in the mortuary. Devoted Muslims, his parents rejected a post-mortem analysis to determine the cause of his death. Now it will never be known.

Video: Shooting Of Joho’s Car In Attempted Assassination And Bodyguard In Migori Caught On Tape