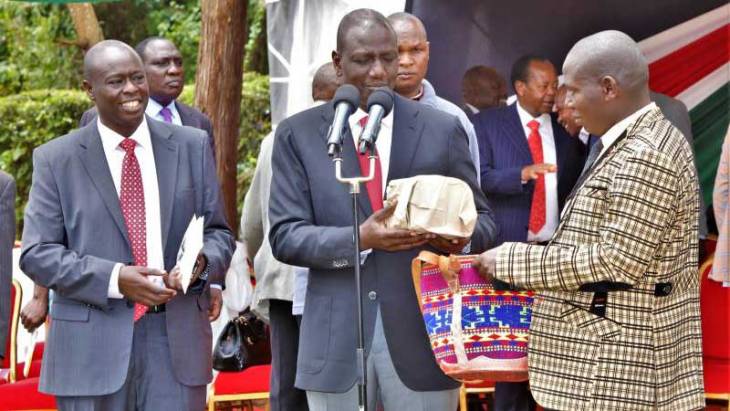 Deputy President William Ruto hands over his donation during a past fund raising meeting.

Independent Electoral and Boundaries Commission (IEBC) has revealed that it will bar political aspirates participating in a fundraiser from running for political seats.

Speaking during a virtual meeting with the Senate Committee on Justice and Legal Affairs on Wednesday, IEBC chairperson Wafula Chebukati revealed that aspirants will not be allowed to participate either by contribution or attendance in a fundraiser after December 9, 2021.

According to Chebukati, those found conducting Harambees after the said date will be found guilty of committing an electoral offence therefore they will be barred from vying in the next year’s elections.

“On the issue of harambees, after December 9, it becomes an election offence,” Chebukati told the committee.

Chebukati said that the Commission will work with security agencies including the Office of the Directorate of Public Prosecution (ODPP) to ensure those politicians found breaking the law are brought into the book.

He said that the move to ban the fundraisers is a way of curbing aspirants from influencing voters through their contributions.

The IEBC chairperson, however, allowed politicians to hold fundraisers for their own campaigns.

“Exception however from subsection 2 of section 26 of the IEBC Act, aspirants are allowed to hold a party or individual fundraisers for their campaigns,” he said.

Kenya Insights allows guest blogging, if you want to be published on Kenya’s most authoritative and accurate blog, have an expose, news TIPS, story angles, human interest stories, drop us an email on [email protected] or via Telegram
Related Content:  The mole Ruto planted in Mudavadi's camp
Related Topics:IEBC chairman Wafula Chebukati
Up Next

Raila Says Ruto Is To Blame For Kondele Chaos, “You Provoked The Youth”