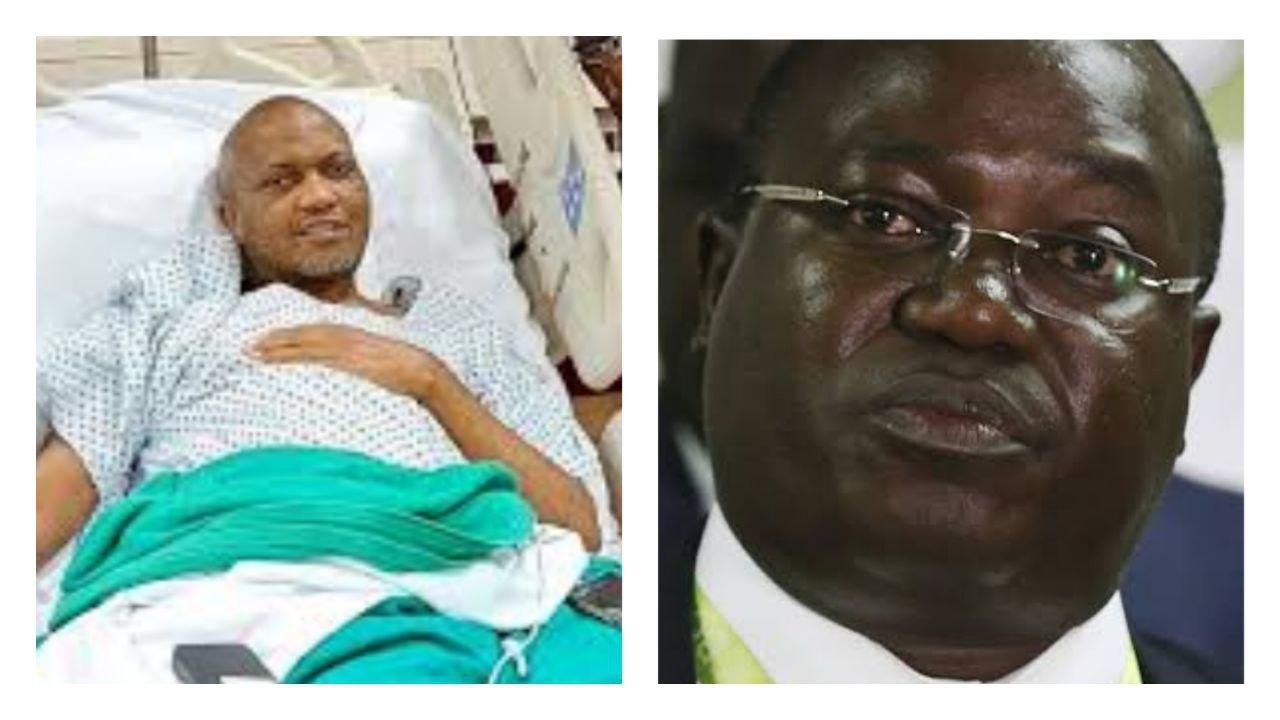 Gatundu South Member of Parliament Moses Kuria has responded to those “wishing him death” and linking his recent ailment to the tragic death of former Independent Electoral and Boundaries Commission (IEBC) ICT Director Chris Msando.

Through a social media post published on the evening of Wednesday 15, December 2021, the outspoken Mt Kenya politician warned that he had taken judicial notice of all persons that made negative comments against the backdrop of his impending eighth surgery at a hospital in Dubai.

“I will respond when those comments come from more than one community in Kenya,” he added in his tweet. 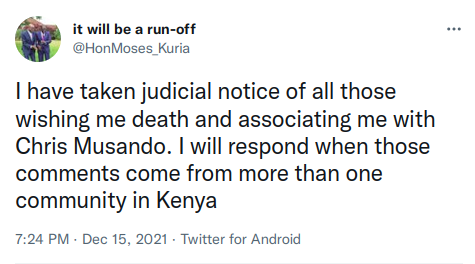 The legislator made these stern remarks on the same day he was scheduled to undergo stem cell surgery in an attempt to fix the third-degree burns that he suffered after a feet-warming mat he had bought malfunctioned.

But even as Kuria prepared to go through the operation, reports emerged of netizens linking his latest predicament to his alleged involvement in the mysterious kidnapping and killing of the late Chris Msando.

Among those who went for his neck is former IEBC commissioner Roselyn Akombe who attacked him in a cryptic tweet.

In reply to a news update on Kuria’s current state of health, Akombe quoted the famous Bible quote that credits vengeance to God. 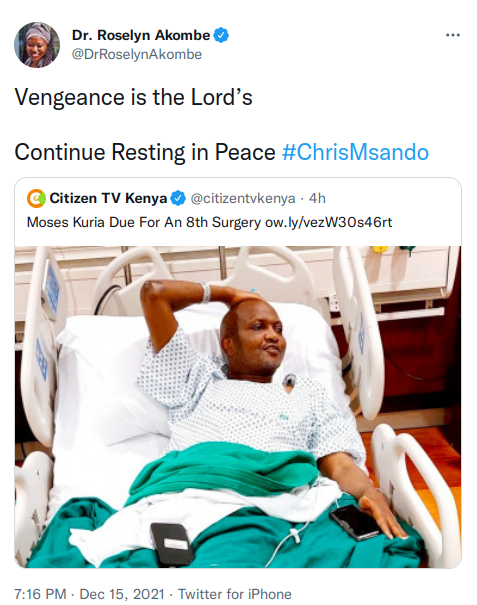 Days later, he was found dead alongside Ms Carol Ngumbu, a woman it is claimed he was with on the night he went missing.

Their bodies were found in the famous Karura forest.

Immediately the news of his death was broken, focus sharply shifted to an earlier Facebook post by Moses Kuria where he had claimed that the missing Msando was apparently having a good time with a female companion in Nairobi’s Roysambu estate.

Attached to his viral post which he later deleted was a picture of himself pointing at a vehicle – a grey Land Rover Discovery – believed to be that of Mr Msando, which was found parked in Roysambu, Nairobi. At the time, Kenyans demanded that the legislator be investigated.

Although little action was taken by legal authorities, a chilling moment a few days later during his burial in September 2017 provided temporary reprieve to the grieving family and friends.

In the middle of proceedings to lay him to rest, an elderly woman who was later identified as his mother took to the stage and declared she had granted Msando “permission” to torment his killers.

When exercising the cultural ritual which is common among the people of Western Kenya, the woman could be heard issuing instructions to the corpse in a harsh tone, amid wails and murmurs from some of the mourners gathered by the graveside.

At some point, the woman orders the pallbearers to remove the glass pane covering the casket to allow her to touch the dead body.

She then stretches her hand to pinch the deceased’s ear, supposedly with strict instructions to make life a living hell for those responsible for his untimely death.

Related Content:  Tanzanian Ex-MP Lema And His Family Gets Asylum In Canada

Despite denying links to the crime multiple times, the cloud of Msando’s killing has persistently stuck above Kuria’s head.

In one instance the MP gave his own account as to why Kenyans may have wrongly linked him to death.

Speaking to the press at the Parliament Buildings, he explained that on the weekend after news of Msando’s disappearance spread, with a picture of his vehicle widely circulated online, he was informed of the presence of a similar car in Roysambu, Nairobi.

Given at the time he was at a function in Murang’a County with Woman Representative Sabina Chege, he claimed to have called Kasarani divisional police commander (OCPD), to inform him about the vehicle said to have been in his area of jurisdiction.

As a precautionary measure, they purportedly waited for police to arrive and accompany them to the place where the alleged car was parked.