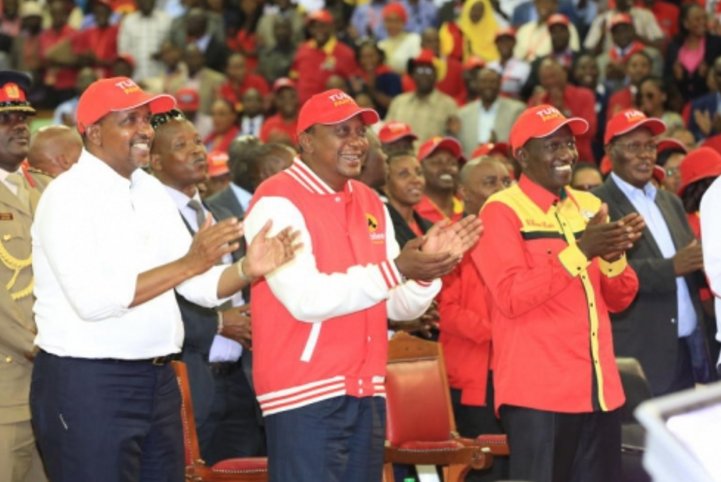 By Nicholas Olambo
Kenya is always in a campaign mode even a day after a general election. Two significant political divides are preparing and promising to beat their opponents hand down in the coming polls in August, preparations have been ongoing since 2013 when we had the last general elections.

Jubilee emerged winners in the 2013 elections; opposition challenged the results in court, but the verdict maintained status quo. They then resorted to poking holes in the leadership style of Jubilee, revealing every corruption scandal. The opposition has made corruption their campaign agenda.
As expected, nearing election period is when the most important political realignments are witnessed; the opposition is forging a united front to dethrone Jubilee from power, something similar to the 2002 NARC that defeated KANU’s Uhuru and ended Moi’s 24-year rule.

A fast forming united opposition (NASA) has sent strong political shock waves in Jubilee; the ruling regime is in an evident panic mode. It has slim chances of retaining power if they have to face a united opposition in the coming polls.
While addressing the nation on Jamhuri day, the president accused the West of working to influence the outcome of the coming elections by financing opposition through NGO’s. That saw the deregistration of IFES; An American organization that supports citizens’ rights to participate in free and fair elections. IFES had been in the country conducting civic education for over a decade undertaking the same exercise in collaboration with the electoral body ECK/IEBC.

These are desperate moves to create another narrative that the West are opposed to them being in power the same way ICC issue was twisted to blackmail ignorant citizens. The tyranny of numbers myth has no place in the coming election which is seen as the most consequential in the history of Kenya.

Related Content:  Coronavirus: Kenya Must Now Prepare For The Worst

A united opposition leaves no room for vote spoiler candidates, Musalia Mudavadi who was used for the same is now in the frontline of Nasa. It’s said that elections are won way before the polling day, Jubilee while launching their membership smart card were chest thumping that they have the numbers to beat the opposition with a 70+1 % of the votes.

The launched smart card is aimed at ensuring a smooth, credible, just and fair nominations that will be conducted by IEBC. But on the other hand, the ruling coalition is fronting for a negotiated democracy to produce the candidate for Nairobi gubernatorial race. They say Nairobi is must win county by hook or crook.

The panic is intense in Jubilee, from the introduction of draconian election laws that their Speaker Justin Muturi passed in a chaotic special session, constant wrangles with the Mombasa governor Hassan Joho who has refused to be ‘bought’ by Jubilee to Majority Leader Adan Duale’s threats to ethnically cleanse members of Kamba community who will vote or register to vote in Garissa.

It’s a do or die contest for both sides, Uhuru saw the elections in Ghana and Gambia where the incumbents were beaten and conceded. He does not want to be another victim. Raila will be putting a strong fight to send the ‘corrupt’ Jubilee administration and he only has one ‘bullet’ to do so. Uhuru lose would also dent DP William Ruto’s dreams, he has burnt all the bridges except for a few sycophants and may have nothing to cling on to realize his 2022 dreams.

Related Content:  What It Means For Martha Karua To Throw Her Weight Behind Uhuru Kenyatta Presidency
Kenya Insights allows guest blogging, if you want to be published on Kenya’s most authoritative and accurate blog, have an expose, news TIPS, story angles, human interest stories, drop us an email on [email protected] or via Telegram
Related Topics:
Up Next

There’s Is Life After Presidency, Why African Dictators Obsessed With Power Must Learn To Let Go And Start Living