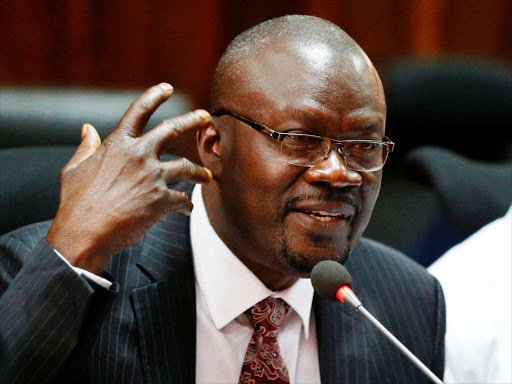 Rasanga who was questioned by the Senate Standing Committee on Health fumbled to explain where he got the Sh115 that he spent in fighting Covid-19 yet the money allocated to the fund was Sh100 million.

The Auditor General’s special audit report on how the devolved units spent the Covid-19 funds shows that Siaya’s emergency fund was flagged over over-spending of the county emergency funds. But the governor claimed that his administration only spent Sh100 million and not Sh115 million as indicated in the special report.

“It was established that as of 31 July 2020, Sh115,884,928 had been committed for Covid-19 related activities which was against the approved budget allocated to the county emergency fund for Covid-19 purposes,” the report reads.

The Auditor General’s office had confirmed that there was enough evidence to prove that Siaya county made the payments amounting to Sh115 million. Rasanga who was questioned via remote gave conflicting statements with the team from the AG’s office.

Kisumu County Senator, Fred Outa, who chairs the committee directed the controversial governor to provide proof of his expenditure after he gave him one week to provide evidence that he did not overspend.
Related Content:  Corruption And Ethnic Imbalance At University of Kabianga

Siaya spent Sh270 million in Covid-19 related emergencies where  Sh100 million was from the county emergency fund with the county receiving Sh60 million on July 3 and another Sh40 million a week later.

The AG’s special report comes after a section of Rasanga’s senior staff were recently exposed over rampant looting in the county. The assembly Speaker George Okode was found to be leading a cartel that is also swindling county funds through suspect deals.

Kenya Insights allows guest blogging, if you want to be published on Kenya’s most authoritative and accurate blog, have an expose, news TIPS, story angles, human interest stories, drop us an email on [email protected] or via Telegram
Related Topics:Auditor General special reportCornel RasangaLooting covid-19 fundsLooting in Siaya county
Up Next