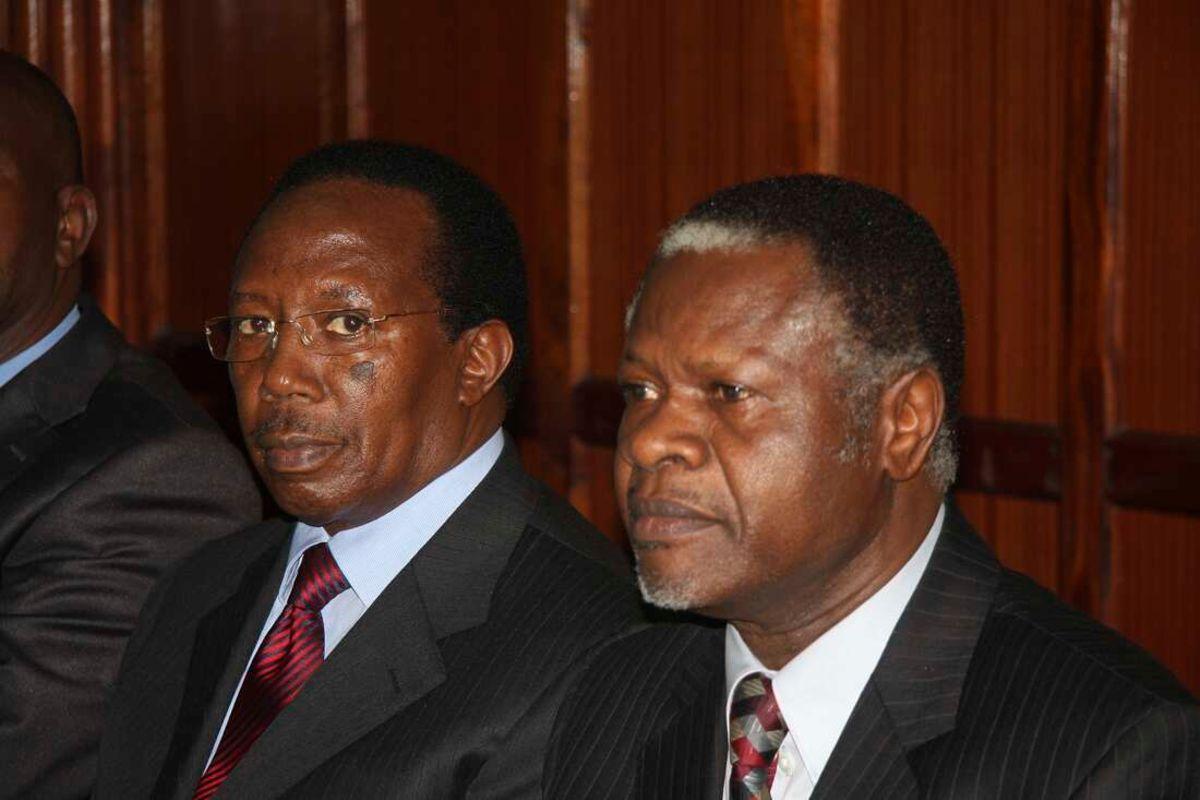 There is a long tradition of making money in this citadel. It has a story perfected through years of filth – no arrests and no convictions.

As it turned out later, when Mr. Gichuru was the head of the utility, mostly during the Moi years, he gave himself up as a of consultants for the companies who apply for large projects in the company he leads. He wasn’t the only one in the chain of theft that plagued the company.

Barons in the energy sector took the cue and easy to learn from the best in the game of sleaze in the energy sector. Insiders say that Mr. Gichuru did not work alone but did his business with the full knowledge of President Moi, who also built his own financial empire.

The story of how Mr. Gichuru and Moi’s Treasury Secretary Chris Okemo were involved in an intricate network of frauds is now included in court files filed on Jersey Island where they are supposed to answer money laundering allegations of extradition.

In Kenyan power and in the Moi political elite, Mr. Gichuru was simply Mr. Moneybags and today reflects the kind of filth that took place within parastatal power.

When Mr. Gichuru founded the Windward Trading Company, which he registered in the Jersey offshore port, he never knew he would be exposed.

Finally, it had separate dir ctors who pretend to be the owner. He also had the blessing of Finance Minister Mr. Okemo.

We know from court records that both Mr. Gichuru and Mr. Okemo ran a complicated web where foreign companies could win tenders and contracts with Kenya Power – guaranteed by the Treasury – and in return would pay “consulting fees” to Mr. Gichuru’s Windward Trading Company, which had an offshore account in Jersey. He later paid into an account owned by Mr. Okemo.

For example, when John Brown Engineering received a tender to install a gas turbine for Kenya Power’s Kipevu power plant, it claimed in court that Windward was Windward. paid £ 451,037 (Sh68m at current exchange rate).

When this turbine failed, the company was asked to install a new one and paid Mr. Gichuru’s Windward an additional £ 386,000 (Sh58.3m) “Come back in for this business.”

Mr. Gichuru was able to protect his real wealth from public scrutiny – until a treasure trove of documents revealed how he siphoned off money through contracts.

Part of that information came to light when Mr. Gichuru’s ex-wife, Salome Njeri, filed for divorce demanding a stake in the family’s Sh20 billion empire. Njeri has since died.

The court records show that Mr. Gichuru not only controlled a billion-shilling empire, but also had accounts in Jersey on which he disguised funds from Kenya power kickbacks as advisory fees hidden.

About 20 years ago the British House of Commons began to investigate what happened to around 8.2 billion shredders that Kenya had for the Ewaso Ng ” iro hydropower plant. They found that the feasibility study – which was part of the loan – diverted money to Mr. Gichuru’s Jersey account for a project that never got rolling.

Related Content:  Court Okays Extradition Of Gichuru And Okemo To The UK

A tradition of sleaze projects has been established at KP for ages and has never been broken. During Mr. Gichuru’s tenure, most of the filth was conducting dam feasibility studies, most of which were never completed.

That included building mega-dams such as the Turkwel project , in which high-ranking government officials benefited from the French bribes thanks to excessive costs.

For example, a study team from the World Bank reported in 1992 that the feasibility study for the British company Knight Piesold for the Ewaso. Ng’iro dams cost “five times what such services would normally cost”.

This was true for three dams, which by 2007 were worth $ 350 million should be built. The Ewaso Ng’iro Dam scandal prompted the UK government to investigate Mr. Gichuru and Mr. Okemo.

In order to pay bribes to Gichurus Windward Trading Company, Knight Piesold initially received US $ 15.3 million -Dollars in advance from KP, although the dam was not dismantled 10 years later.

The Ewaso Ng’iro Dam never came about, so the Kenyan taxpayers had to pay a loan for a non-existent project. But Mr. Gichuru and the people he represented had made their money.

Kenya Power remained 14 reports produced between 1991 and 1993, with each report costing an average of $ 2.7 million. This means that the feasibility studies alone cost the Kenyan taxpayers 3.8 billion Sh. of which, according to court records, they paid Mr. Gichuru’s corporate consultancy fees.

That was at a time when the UK Export Credit Guarantee Department (ECGD) had its job was to help British companies find and win tenders abroad, has been criticized for turning a blind eye to corruption in several developing countries.

Once nicknamed the Shady Business Department ECGD caught the attention of Transparency International and other lobby groups for failing to tame bribes.

This department had, on June 21, 1990, endorsed a £ 68.1 million loan between the ANZ Grindlays Bank and the Moi government – and which on paper should serve to finance the contract between KPLC and Knight Piesold.

As emerged from court files, part of this Ge This was diverted to Jersey Island, where Mr Gichuru had opened some secret accounts in 198 6 with the help of Deloitte & Touche, a Jersey accounting firm.

When the British tried to extradite Mr Gichuru, an official from Knight Piesold admitted later announced in an affidavit: “It was impossible to work in Kenya without paying a commission to important political figures. It was like a tax. “

”Ritter Piesold paid such commissions to various people. Without this we would never have been able to work there. One person we paid was Samuel (Gichuru), “said Mr. Peter Garrat, an officer at Knight Piesold, in the extradition papers.

Mr. Gichuru worked for KP for many years and had found a way his dream projects. He would contact a UK bank, which would then ask the ECGD to guarantee the bank would pay off the loan.

The Energy Secretary and the Treasury Secretary in Kenya would then sign guarantees and the appropriate government the bank would then use the loan to pay off the hired British company. Mr. Gichuru would then receive his commission as a consultant.

Once Camargo received the money, it would deduct 2 percent and transfer the balance to Mr. Gichuru Windward and Okemo’s accounts – hoping that it would never be found.

Although Gichuru was the MD of Kenya Power, he also posed as the agent of Knight Piesold and charged them agent fees for any contracts they received. The records indicate that every time Knight Piesold was paid by Kenya Power, Mr. Gichuru’s excessive brokerage fee was later passed on to Kenya Power.

“This evidence is supported by the records that show that most of the payments to Gichuru and Windward came after KP was paid millions of pounds … related to a hydropower project called Ewaso Ng’iro and that commissions were included in the consulting fees, “court records show.

In his case, Mr Okemo is said to have opened his bank accounts on the way to Finland to meet officials from Wartsila, a Swedish energy company. Then Mr. Okemo gave them a letter of commitment. Mr Okemo was the new finance minister at the time and had participated in negotiations with Wartsila when he was Moi’s energy minister. According to the court records, only Mr. Okemo was authorized to give Wartsila the papers they needed to move the project forward. If the project were approved, Windward – or rather, Mr. Gichuru – would also receive the consulting fee.

In all of these deals hundreds of millions were marked by projects carried out by KP, but they were hidden from review.

Court records also show that Mr. Gichuru, as managing director of the energy company, disguised himself as a broker and advisor. They show that at various points in time between 1986 and 2002, Windward had received payments of 5.4 million (Sh. 102 million) from various companies under contract with KP.

The records state that Mr. Gichuru part of the 2.1 billion Sh. for his “personal expenses” while Mr. Okemo kept the money in his Jersey accounts before investing it with “recognized financial institutions”.

But the overthrow of the Kanu regime had most of the Nyayo -Hemi gods exposed. When the Mwai Kibaki government began persecuting some members of the Nyayo-era web of filth, Mr. Gichuru decided to pursue the billions he had in Jersey and hide them elsewhere.

Loud Record of his case in Jersey was after a Deloitte-owned trust company, Walbrook Trustees (Jersey) Limited, filed a suspicious transaction report on his company in May 2002.

The company hired Mr. Gichuru then directors available while he was in the shade.

After Mr. Gichuru realized that the British were after him, he tried to put some of the cash in an in Hiding Gibraltar based company Argus Management Services. For example, Mr. Gichuru’s Windward transferred $ 150,030 to Argus on May 18, 2001.

But when the directors of Windward Trading were sued for money laundering in a Jersey court, they surprised Mr. Gichuru when she pleaded guilty and by surprise Mr. Gichuru’s more than Sh520 million confiscated.

Mr. Gichuru had told a court in Jersey in another case that he was the beneficial owner of the company – and not the directors, and so it turned out found that KP’s cash flow was through various contracts.

Mr. Gichuru lost his case in Jersey after the judge ruled that he “accepted bribes from overseas companies that contracted [Kenya Power] had completed the office and hid them in Jersey. (Windward) knowingly enabled Gichuru to receive substantial bribes while serving in public office in Kenya. The company played a crucial role, without which corruption on a large scale is impossible: money laundering. ”

When Parliament started investigating KP and a forensic report called the Nyanja Report was presented, Mr Gichuru – the disadvantageously named – went to the High Court, which annulled the report on July 28, 2005.

When MP asked Sammy Weya what would become of the forensic study, he was told it was null and void.

Mwangi Kiunjuri, a deputy energy minister, told Parliament that the KP board had also attacked forensic auditors Ernst and Young for “alleged check fraud “Commissioned. However, it turned out that there was no evidence of the alleged fraud. ”

Although he said criminal cases had been turned over to the Kenyan Anti-Corruption Commission, none of the barons within KP were ever prosecuted.

After Mr. Gichuru’s departure, KP never ceased to be the playground of the cartels; Instead, it became the place for big projects and easy money. Soon the dams began to dry up and the coffers were empty. Some new Mr. Moneybags had taken it over.

After a long battle and playing with the courts, Gichuru’s worst fears has happened with Supreme Court allowing for his extradition to the UK together with his partner Okemo to face the money laundering and theft charges.

Kenya Insights allows guest blogging, if you want to be published on Kenya’s most authoritative and accurate blog, have an expose, news TIPS, story angles, human interest stories, drop us an email on [email protected] or via Telegram
Related Topics:extraditionFormer Cabinet Minister Chris Okemoformer Kenya Power boss Samuel Gichuru
Up Next