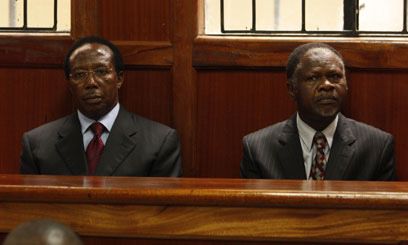 The Supreme Court in Nairobi delivered a landmark ruling on the extradition to Jersey Island of Chrysanthus Barnabas Okemo and Samuel Kimunchu Gichuru.

Mr. Okemo served as the Minister for Energy in the Kenya Government between 1999 and 2001 and Gichuru was the managing director of the Kenya Power and lighting Company got decades.

How It All Started

Okemo and Gichuru came under the radar of investigative authorities after allegations that the duo accepted bribes from foreign businesses that contracted with KPLC and hid the money in Jersey.

The duo managed to evade suspicion by having the contractors pay the dirty money into the bank accounts of a Jersey company called Windward Trading Limited.

The offshore company named Gichuru, the KPLC Director as the beneficial owner, buthe controlled it through proxies.

He ensured the money was deposited in the bank account of the company and routed under discrete instructions to personal accounts of Okemo and Gichuru in Jersey.

1′ July, 1999: When the matter was hatched, Okemo was charged in the Royal Court of Jersey with thirteen counts relating to the transactions in the accounts committed in the Island of Jersey under Jersey law.

On the other hand, Gichuru is charged in the same court with forty counts for offenses allegedly committed under Jersey law in the Island of Jersey between 1991 and 28 June, 2002.

26th May 2011. The Attorney General of the Island of Jersey wrote a letter requesting Kenya’s then-Attorney General, Amos Wako, to commence extradition proceedings against the two Applicants.

While the letter was addressed to the Attorney General of Kenya, the authority to commence the extradition proceedings was in fact given by the Director of Public Prosecution (DPP) and Miscellaneous Application No.g of 2011 filed in the Chief Magistrates’ Court at Nairobi to commence the said proceedings.

The previously mentioned letter was received on 6th June 2011, 10 years later, and constituted a request for the extradition of Okemo and Gichuru from the Attorney-General of Jersey through Verbal note number 452/11 through the British High Commission in Nairobi.

The Attorney-General forwarded the extradition request to the Director of Public prosecutions for his consideration and action.

ISSUANCE OF “AUTHORITY TO PROCEED”

The Director of Public Prosecutions issued an “Authority to Proceed” to the Chief Magistrate pursuant to the provisions of section 7(1) of the Extradition Act.

The extradition Cause was allocated Nairobi Chief Magistrate’s Court Miscellaneous Application No. 9 of 2011. Subsequently, the applicants appeared in court and the extradition proceedings were ready to commence.

OBJECTIONS TO THE EXTRADITION PROCEEDINGS

Moments before the proceedings, Okemo and Gichuru filed a Notice of Preliminary Objection/Grounds of Objection dated in July 2011 and filed in court on 8 July 2011.

In addition to the Notice of Preliminary Objection the duo filed Constitutional Petitions in the High Court being Petition numbers 90 and q1 both of 2011 which were subsequently renumbered Petition numbers 320/2011 and 321/2011 respectively.

Related Content:  Is Mombasa Next Or Already Is? Morocco's Subservience To Heroin

However, the objections were dismissed in a Ruling delivered on 5th February 2013.

The two later filed a Constitutional application by way of an Originating Notice of Motion being Application against the Director of Public Prosecutions and the Chief Magistrate’s Court.

The application was indicated as brought pursuant to Article 165(6) & (7) together with section 19 of the sixth Schedule of the Constitution of Kenya 2010 as well as Rule 2 of the Chief Justice Rules 2006.

The High Court Constitutional Application was however thrown out by Justice Isaac Lenaola on 18th December 2015.

APPEAL TO THE COURT OF APPEAL

The DPP, having not been satisfied with the decision. The office then lodged their appeal to the supreme court of Kenya.

SUMMARY OF THE GROUNDS FOR APPEAL & THE PETITION TO

THE SUPREME COURT OF KENYA

In the ruling delivered, the Supreme court faulted the lower courts for thwarting extradition proceedings.

“The Learned Judges erred in law in holding that the extradition proceedings instituted against the first and the second respondents without written authority to proceed issued by the AG are a nullity in law including any act done by the magistrate against the appellant in pursuant of such proceedings. Pursuant to this ruling, the OPP shall take steps to expedite the extradition proceedings before the sub-ordinate court as directed by the Supreme Court.”

Dispute Over Food With Wife Lands PS In Trouble

DPP Haji Claims His Life And Family’s In Danger