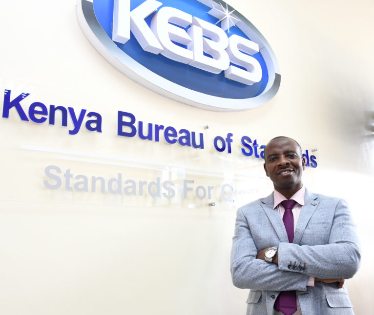 Kenya Bureau of Standards (Kebs) and representatives of bidders on Wednesday, 5 May 2021 settled to open tenders for pre-export verification inspection of conformity (Pvoc).

The Pvoc tenders were opened after two extensions ordered by the Public Procurement Administrative Review Board (PPARB).

Kebs advertised the Pvoc tenders both for used motor vehicles and spare parts, and for other goods on January 19 and the original closing date of February 10 was extended to February 25 after Five Blocks Enterprises owner Dr Nzai (one of the bidders) successfully petitioned PPARB to have Kebs amend the tender. With the PPARB decision, the bidding was again extended to March 24.

Again, a day before the closing in March, Five Blocks Enterprises again went back to PPARB alleging that Kebs had failed to follow a directive by PPARB that it, among others, unbundle the tender into lots so that it can award the tender to several bidders.

This second application for review was also successful and the bidding period was extended to May 5 at 11am.

At the close of the submission of bids on Wednesday, only four companies submitted bids for the Pvoc for motor vehicles and motor vehicle spare parts of which are Quality Inspection Services Japan (QISJ), Auto-Terminal Japan (ATJ), East Africa Automobile Services (EAA) and Wilnar International Company.

For pre-export inspection of other goods other than motor vehicles and spare parts, 16 companies are competing. In a bid to break the monopoly, Kebs hopes to give the tenders to more than one company in the pre-export inspection. However, over the years, the tenders for pre-export verification of motor vehicles and other goods destined for Kenya has often attracted intense bidder rivalry because of the fees that the successful companies charge to conduct the inspections.

Between February 2018 and September 2020, Kenyans imported 214,771 vehicles including agricultural tractors, bulldozers and other off-road vehicles, according to Kebs invitation to tender document. By inspecting the 214,771 vehicles the firms that had the Pvoc contract earned $34.3 million (Sh3.7 billion), from which Kebs earned at least Sh1.3 billion in royalties.

Kebs through its leadership has been at the helm of money laundry especially when awarding tenders. The Managing Director- MD Benard Njiraini was on July 2 arrested by EACC for obstructing a bribery investigation linked to the controversial vehicle inspection tender. It is the Sh2.5 billion overcharge in inspection of used imported cars, equipment, and spare parts.

The tender was under wraps and was only discovered during a PIC review of the agency’s books of accounts.

Suspicion arose after Njiraini denied that Kebs tendered for the expansion only to admit the same later after documentary evidence was produced and tabled.

The Public Procurement Regulatory Authority (PPRA) said the tender was flawed as it was not approved by the National Standards Council. The procurement plan had been done on January 2 while invitation to tender was done on December 3, 2019.

PPRA also flagged the approved procurement plan presented by Njiraini as having lacked estimated cost and source of funding for the project. “The procurement was not based on indicative or approved budget; and was done without purchase requisition. The tender document stifled competition,” PPRA said.

In October, 2020 last year – Kebs was stopped from expanding a vehicle inspections tender following queries around the process.

Parliament adopted a committee report that seeked to have Kenya Bureau of Standards (Kebs) Managing Director Bernard Njiraini held responsible for litigation that could arise from a controversial tender.

At the Public Procurement and Regulatory Authority (PPRA), a debarment application is pending. The Directorate of Criminal Investigations (DCI) is also investigating these two firms who are among the applicants for the multi-billion tender not for the first time.

A Kenyatta University economics lecturer, Dr Charles Nzai, and the Auditor-General, applied for the debarment of Auto-Terminal Japan on grounds that it had submitted false information regarding its qualifications, and that the company has falsified documents in all Kebs tenders ATJ has participated in since 2011.

But in October 2020, High Court Judge Pauline Nyamweya stayed the implementation of parts of the PIC. Both EAA and ATJ have raised questions about the validity of the report, arguing that it was prepared outside the timelines and also that the officer from the Office of the Auditor-General who conducted the audit was conflicted.

However, ATJ on April 15 and May 5 filed notices of preliminary objection, saying that the Auditor General has lacks the mandate to make recommendations on tendering processes.

Like in a bitter rivalry competition, QISJ managed to bully out its two bitter rivals; EAA Company and Auto Terminal Japan Company from clinching the tender since 2015 by  compromising 4 top officials from Auditor General’s office: Mr Fredrick Odhiambo, Catherine Mwasho, Brian Thuku and Dr John Ng’eno. The firm has been the sole inspection contractor since 2015 and managed to clinch another one again, of which expired in April 2021.

In evidences presented before Public Investment Committee (PIC) by director of Auto Terminal Japan Company, Isaac Kalua -the  four officials from the Auditor General’s office accepted facilitation by QISJ to United Kingdom, South Africa and Japan, where they conducted their audit. The office conducted a sham investigations and wrote in favour of the QISJ, corrupt firm which is a subject of probe till today.

In January this year, the firm QISJ came under harsh criticism from the ever hawkeyed netizens on Twitter known for calling out corruption cases using KebsInspectionScam and questioned the relationship that the alleged dubious firms had with Kebs that has consistently won them the inspection tenders.

In a quest to gain a competitive edge over rivals, bidders and proxies are throwing everything available to discredit competitors. The tactics already at play now point to a fierce bidder fight for the multi-billion shilling three-year contract. With big fish bidders already reaching out to bribe out small fish bidders to hop out of the race. The big fish like QISJ,ATJ, EAAC who are marinated with corruption, under probe of the authorities over forged documents, QISJ which is a blacklisted firm are likely to clinch the tender especially the second hand vehicle pre-export inspection multi-billion tender. That’s the extent Kenyan authorities have normalised corruption and are awarding the corrupt.

QISJ also came under the spotlight following an investigative report on Citizen TV in May 2020 that revealed how the firm was allegedly used to steal Sh2.5B from Kenyans.

Quality Inspection Services Inc Japan (QISJ), was exposed over an extra Ksh4,000 extra fee charged on each imported car for over six years.

From the investigations it emerged that a private Kenyan car importer, George Odhiambo filed a case at the High Court, accusing the Japanese company of overcharging Kenyans during the inspection process, arguing that the burden of the extra cost was eventually passed to the consumers.

“The first respondent (Quality Inspection Services Inc. Japan Limited) has been overcharging exporters and importers and Kenyans and unfairly withholding more fees than that contracted for.

“The first respondent charges from its website, and still overcharges consumers when the current exchange rates for each subject country are applied against the contracted currency,” court papers filed by Odhiambo’s lawyer Andrew Ombwayo read in part.

The petitioner went on to question the legality of QISJ operating as a monopoly in Kenya, giving them the autonomy he claims they have used to siphon billions from the country over the years.

“The fact that the extra charged levies by the first respondent are passed to the consumers violates the consumers’ right to the protection of their economic interest.

“The loss is likely to be more considering that a Parliamentary progress report of the special audit report dated July 10, 2019, on procurement of pre-export verification of conformity to standard tender no Kebs/T019/2017-2020 had in page 13 placed the figure of motor vehicles imported into Kenya in the years 20150-19 at 409,070 used vehicles,” Odhiambo says in the court papers.

The country imports an estimated 130,000 second-hand vehicles annually, with used cars accounting for about 85% of the imports, where an estimated Ksh60 billion is spent on these units annually.

Kebs hired QISJ on April 3, 2018, and the firm has been offering inspection and verification on behalf of the State agency. It also ought to collect agreed fees on behalf of Kebs and remit the same.

According to the case documents, the contract provided that QISJ charge $155 (Sh16,585) for each vehicle submitted to it for inspection from Japan for importation to Kenya.

From the amount, QISJ was to remit $45 (Sh4,815) to Kebs at agreed intervals and volumes and retain the rest as its fees.

Odhiambo alleges that QISJ in the financial year overcharged importers by $30.66 (Sh3,280) per vehicle.

Odhiambo claims that other inspection service providers hired by Kebs have been charging less than the Japanese company.

Despite all the documented sins, Kebs has listed the same tainted companies. Sources familiar with the boardroom games talking to Kenya Insights say that the intense lobbying that is being pushed by powerful cartels inclined to the top bidders who’ve enjoyed the fruits despite having unhealthy reputation, are extending their henchmen to Dr Charles Nzai with the hopes that he goes slow on his bid to derail the process given that the deal that is about ‘kuivana’. How all this plays out will only be a matter of time. But if the history of the companies involved including bribery claims and corruption involved is anything to go by, the investigative authorities should be on high alert should money exchange hands. Kenya Insights will give more updates on the new developments.

Kenya Insights allows guest blogging, if you want to be published on Kenya’s most authoritative and accurate blog, have an expose, news TIPS, story angles, human interest stories, drop us an email on [email protected] or via Telegram
Related Topics:ATJEAAKEBSQISJ
Up Next