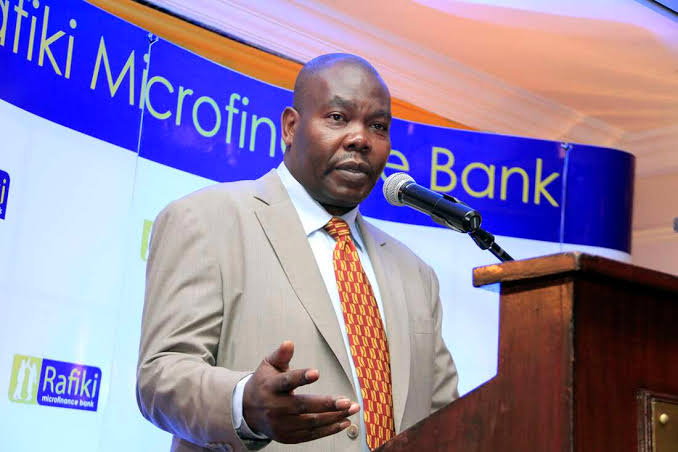 Chief Finance Officer Paul Karanja Macharia was recently appointed to the helm of the CEO post in acting capacity with an aim to be permanently appointed for the position.

Mr Macharia has previously worked at Equity Bank and Chase Bank (Finance Departments) and was a Finance Manager at the collapsed Chase Bank before joining Rafiki in 2016.

In his appointment as acting CEO, he commenced his duty as acting CEO from 1st April 2021 for 90 days as the search for a substantive CEO is undertaken.

Rafiki Microfinance Bank was a subsidiary of Chase Bank and launched its operations in the Kenyan market in 2011 targeting the microfinance industry.

Rafiki was a subsidiary of Chase bank which is currently under liquidation – but was not bought by SBM. Mauritian lender SBM Bank in 2018 carved out and bought 75 per cent of certain assets and liabilities from Chase Bank in what was considered as cherry-picking ‘good assets.’

It is currently oversighted by Kenya Deposit Insurance Corporation (KDIC) as the company hunts for a strategic investor to buy out the Chase bank shareholding.

With the unforgetable and unforgiving corporate fraud history of embezzlement that led to the collapse and liquidation of Chase bank in 2015, it will never be written off in history and those involved continue to enjoy freedom and continue to land more deals in the system as the system loves their conmanship at the expense of customers money.

Like his predecessor Ken Obimbo who was Chase bank CFO and took over as MD – CEO of Rafiki microfinance bank, Obimbo nicknamed ‘Bimbo’ was sacked from Coca-Cola then went to serve as MD of Kenya Bus Service that was run down by graft before joining Chase bank.

Former long serving Head of Marketing and Corporate Affairs Zak Syengo is among the senior executives who have left the company( Rafiki Microfinance) in recent weeks. Mr Syengo has resigned but is serving notice pending his exit.

Replacing Obimbo ‘Bimbo’ with Paul Karanja leaves much to desire.

With the recent exits through resignations and new appointments in the company raises eyebrows and to salt to an injury is that the replacements have the same corporate fraud history as part of their work experience and CBK and KDIC have allowed such a filth to continue in the banking sector with recycling of corporate fraudsters.

Why are naive Kenyans still putting their money at Rafiki Microfinance knowing it’s a subsidiary of collapsed Chase bank being led by the same crooks that laundered the mother Chase bank. Now, they’re looting and resigning to hoodwink the public and customers before they’re unmasked.

Rafiki microfinance under recycled CFO Paul Karanja might just be the last kicks of a dying horse. Thunder is going to strike the same tree twice. Customers of the microfinance bank, thank us later.