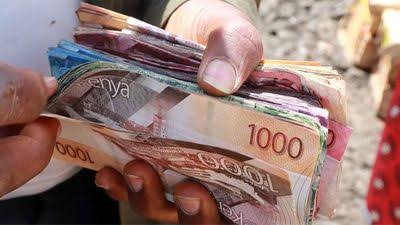 Few weeks ago Kenya insights published a tip expose of a  whopping Shs600 million lost in the county and couldn’t be accounted for in the executive wing.

The truth is rarely simple, yet this does not mean that we should give up on telling the truth. The fact that the truth is complex is not an excuse to resort to comfortable lies. Lies can disguise themselves as truth but eventually, the truth comes to light.In a turn over of events – a  Member of County Assembly (MCA) has admitted to receiving a bribe from the Governor’s office to conceal corruption issues in the county.

Last week during a press conference at the County Assembly precincts, Mr. Okode denied claims that Siaya MCAs had been compromised by the executive to cover up on the over Ksh 600 million graft in the county saying that those were mere rumors.

A list had been doing rounds on social media of a section of Siaya MCAs who had allegedly been given bribes of up to Ksh 290,000 each by the governor’s office to cover up on alleged misappropriation of at least Ksh 600 million but the Speaker dismissed the allegations.

The West Asembo MCA says he was given Ksh.150,000, an amount which he only came to realize later that was part of the bribe handed to his colleagues.

Mr. Akuno, who has been sick, spoke to Radio Ramogi from the hospital where he stated that he cannot deny receiving the money adding that he was visited at the hospital by a section of his colleagues and given the money which to him he thought was a contribution to support his medication.

He says that he suspects that the move to give him the Ksh 150,000 was a trick to silence him since he has been the most vocal on corruption matters within the county.

The Siaya MCAs were allegedly given the bribes after they refused to pass the County’s Appropriation Bill for the year ending 2020/2021 after it emerged that there was no explanation as to why bursaries had not been released, Project Management Committee (PMC) monies not paid and statutory deductions not remitted.

But Mr. Akuno argues that they should just pass the Bill to rescue the county government workers and contractors who are currently suffering, then forward their findings on corruption allegations to the Ethics and Anti-Corruption Commission (EACC) for action.

On whether he will return the Ksh.150,000 that he received without knowledge that it was part of a bribe given by the Executive, Mr. Akuno stated that he does not know the exact place to return it.

Siaya County has lost over Sh2.8 billion to corruption since 2013, according to a senior Ethics and Anti-Corruption Commission (EACC) official. The commission’s Western Kenya regional deputy head, Danstan Aura, described the state of corruption in the county as worrying, saying 313 corruption cases have been reported to the commission since 2013. Out of the cases handed over to the EACC, only 67 have been assigned for active investigations.

Related Content:  How Kilimani Murder Suspect Plots To Get Away
Kenya Insights allows guest blogging, if you want to be published on Kenya’s most authoritative and accurate blog, have an expose, news TIPS, story angles, human interest stories, drop us an email on [email protected] or via Telegram
Related Topics:Looting in Siaya county
Up Next