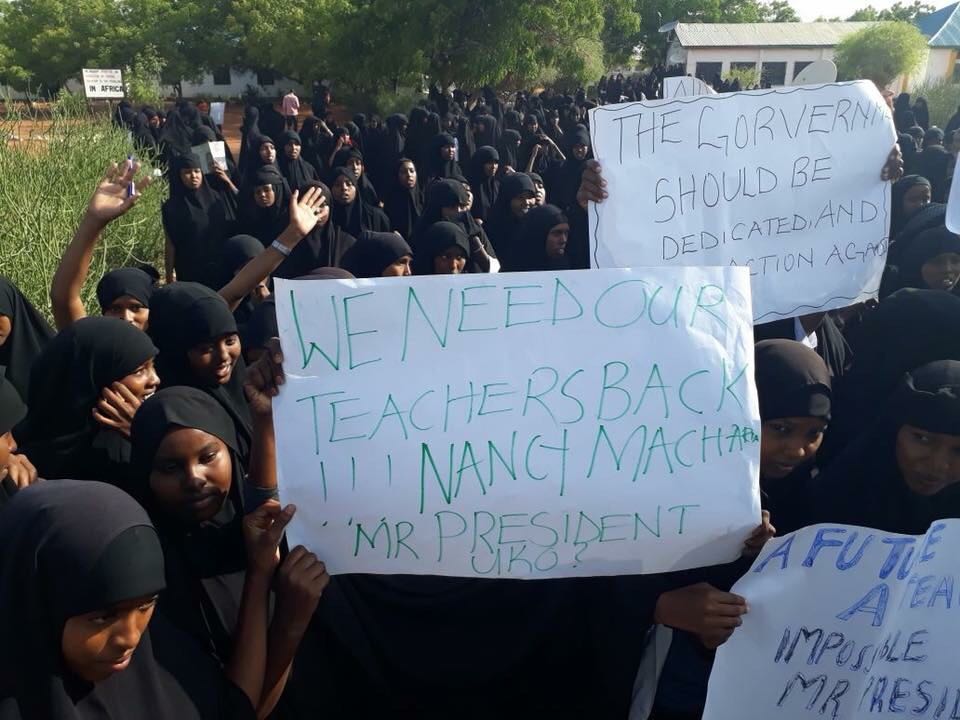 Students in Mandera staging a demo demanding for the reinstatement of the teachers transferred by TSC inline disrupting learning.

Following the death of a teacher and his partner in Wajir recently, the Teachers Service Commission pulled out nonlocal teachers in a mass transfer that has left the region paralyzed and education crisis expanded. The region of NEP has been struggling with teachers imbalance and a general education crisis that has been escalated by what seems to be a blinded decision made by TSC officials in Nairobi.

A section of disgruntled non-local teachers from the region had camped for days at the teacher’s HQ and coerced the commission into submission effecting a mass exodus with the transfer commands. Citing insecurity and discrimination from the hosting community, the teachers amounting to about 50 threatened to town their tools were it that the commission was to retain them in the same region.

The region that has been a victim of negative publicity especially for nonlocals, continues to bare the wrath of what local leaders say is misinformation hence causing an education crisis in the area. According to a research conducted independently by Kenya Insights, a side of the coin in this whole fiasco has been left uncovered thereby not giving a vivid picture.

While it is highly publicized on the mass exit of non locals, the untold story is of those fighting this mass walkout, in an SMS message sent to a Headteacher in Mandera and seen by KI from a Non-Local Teachers who was Camping at TSC Headquarters for transfer, it reads, “…on Thur,15th March,18 I travelled home to see my sick mother hoping to come back on a Sunday but I did not make it.

After thorough Consultations, it has been decided to let the Non-Local Teachers who are voluntarily willing to go back to the County to either Report to TSC-CD, SCD or your respective School Heads before the Schools are closed on 6th April 2018. This is to give the affected Teachers an Amnesty.. so as to Reinstate them or Stop further disciplinary actions to be taken against them.

Mandera due example hosts about 4000 nonlocals who work in various economic sectors from health to education to informal sectors and many of them including private school teachers have come out in defense for the region saying the few cries shouldn’t shadow the major good. Those who’ve spoken to the media are accusing those who’ve been condemning the region for doing so based on selfish interests and rhs5 Mandera and entire community remains safe and hospitable. Leaders have also dismissed the sexual harassment claims saying as a Muslim community, they adhere to the highest moral standards and the sexual harassment allegations are unsubstantiated.

We’ve come to establish that Mandera County for example, happens to have developed one of the best working environment for him local teachers that have not only provided them with employment spaces but given them a sure hub for absorption into the TSC payroll. A system has been configured to take in unemployed teachers, they’re put on salaries made by parents and well-wishers, they’re put on full accommodation at the expense of the school. They’re guaranteed absorption into the TSC system given positive referrals.

Nonlocal teachers in Mandera have castigated their colleagues who fled the region on grounds of insecurity and discrimination. The tutors drawn from private and public schools in the county told the press on Tuesday that claims made by the teachers who left the region after suspected Al Shabaab killed two of their colleagues in Qarsa primary school in Wajir County were unfounded.

Patrick Mwiti, the principal of Ibnu Hajjir Integrated Academy denied allegations that locals were discriminating non-locals in buses and in buying goods from shops at a hiked price compared to the natives. Mr Mwiti has been a teacher since 2011 and lives barely 200 meters from the Somalia border. However, he claimed that he had never encountered any mistreatment from the locals.

He further added that the 123 teachers currently in Nairobi are only seeking transfers to areas near their homes and nothing more. Those nonlocal teachers who left are 123 and those who remained are 660. Mwiti said the school has 16 tutors, 12 of them being nonlocal whom he said are contented with the area and will serve the community with dedication.

Mandera West sub-County Director of Teachers Service Commission (TSC) Mohamed Tullo Ali, denied allegations of sexual harassment on non-local female teachers. He claimed that there were no records at Takaba police station registered by anybody on sexual harassment and were no reports on the same to his office. Tullo said out of the 49 primary schools head teachers, five are non-locals, 20 deputy headteachers out of which 10 are females.

A trend is emerging that a few teachers posted and embedded with security fears, go out of the way to give the negative picture that seasoned nonlocal teachers refute. However, this is not the first time a crisis is hitting these regions and perhaps it is high time the government stopped issuing plastic treatment to a deep crisis.

Transferring nonlocal teachers and replacing them with other nonlocals is simply postponing and recycling the impasse. A lasting solution would possibly train and recruiting teachers from the local region instead of dancing around the issue.

NTV documentary clearly painted the picture on the ground.

Lack of proper solution to the education crisis in this region is not only denying the students the basic rights like rest of their counterparts in Kenya but also a radicalization factor. When these kids are left uneducated and exposed, Al Shabaab will continue taking advantage to recruit them into the terror group in Somalia and Kenya will continue bearing the wrath.

Revealed: Teachers Exodus From North Eastern Has Nothing To Do With Insecurity And Discrimination

Cambridge Analytica Executives Secretly Filmed Admitting To Having Ran Uhuru’s Campaign And How They Stage Managed Everything.