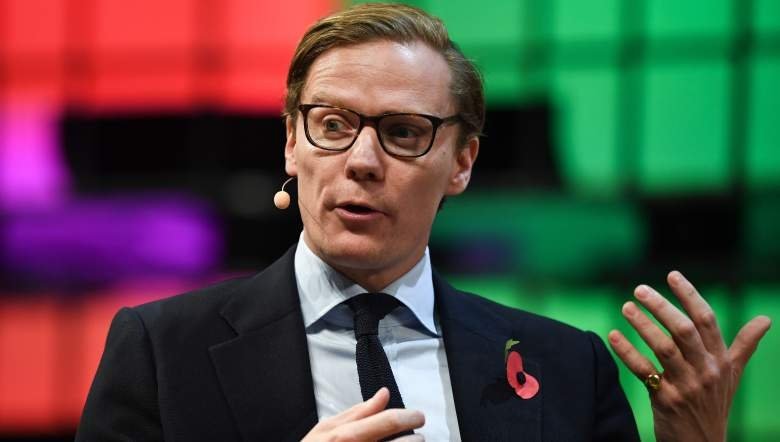 (Reuters) – Cambridge Analytica, the UK political consultancy at the center of Facebook’s election manipulation scandal, ran the campaigns of President Uhuru Kenyatta in the 2013 and 2017 Kenyan elections, according to video secretly recorded and broadcast by Britain’s Channel 4 News on Monday.

The company denied all allegations made by Channel 4 News regarding its business practices.

The news channel said it mounted a “sting operation” in which it said had secretly recorded top Cambridge Analytica executives saying they could use bribes, former spies and Ukrainian sex workers to entrap politicians around the world.

Part of the Channel 4 documentary touching on Kenya’s election.

“We have rebranded the entire party twice, written the manifesto, done research, analysis, messaging. I think we wrote all the speeches and we staged the whole thing – so just about every element of this candidate,” Turnbull said of his firm’s work for Kenyatta’s political party, known as the National Alliance until 2016, and subsequently as the Jubilee Party. 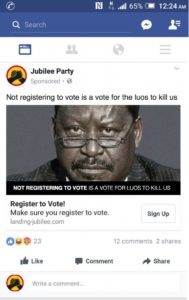 An ad appearing in Facebook, another of hate, fear mongering items that targeted and incited Jubilee supporters against the opposition’s Raila.

Odinga did not contest the repeat vote on Oct. 26, saying it would be unfair because the election commission had failed to implement reforms and Kenyatta won with 98 percent of the vote.

At a prior meeting, Turnbull told the reporters: “Our job is to really drop the bucket further down the well than anybody else to understand what are these really deep-seated fears, concerns. “It is no good fighting an election campaign on the facts, because actually it is all about emotion.”

One of the fear mongering propaganda videos made by Cambridge Analytica.

Cambridge Analytica officials were recorded saying they have used a web of shell companies to disguise their activities in elections in Mexico, Malaysia and Brazil, among various countries where they have worked to sway election outcomes.

Chief Executive Alexander Nix is recorded boasting: “We are not only the largest and most significant political consultancy in the world but we have the most established track record. We need to operate through different vehicles, in the shadows.”

“I look forward to building a very long-term and secretive relationship with you,” he tells the reporters. 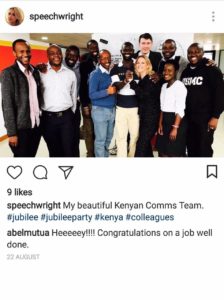 Speech Wright with local agency communication team that Cambridge Analytica worked with to camouflage and ghost themselves. She would later delete this photo from her Instagram page on realizing she had blown her cover.

Cambridge Analytica denied all allegations made by Channel 4 News regarding its business practices. The company said in statement it was humoring the undercover reporters and trying to gauge their motives by actively encouraging them, “to tease out any unethical or illegal intentions”.

Channel 4 noted that their last meeting with Cambridge Analytica had taken place in January at a London hotel and that company employees had continued to email them seeking to strike a deal to work on a Sri Lankan campaign up until recently.

Cambridge Analytica acknowledged in a statement that, its CEO had “misjudged the situation”. Nix said: “I must emphatically state that Cambridge Analytica does not condone or engage in entrapment, bribes or so-called ‘honeytraps’, and nor does it use untrue material for any purpose.”

Thieves Are Getting Smarter, Failing To Report On Your Stolen Phone To The Police Could Land You In Jail