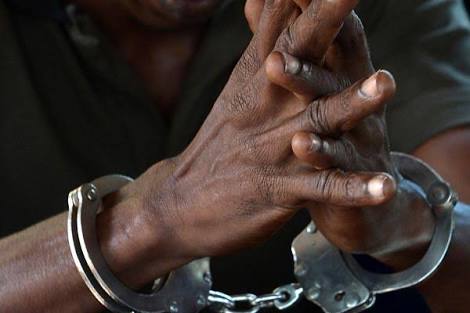 Nairobi remains one of the cities in Africa with high crime rates despite being region’s economic hub and Kenya being a preferred destination for the world’s richest. Criminal gangs comprising mostly of young men in their early twenties and some as young as 13 years are giving city residents a run for their lives.

Seven in every ten Nairobians you meet, have been mugged and everyone always has a story to tell. Recently, the situation in the CBD escalated to dangerous levels as these gangs took over the streets. Phones, wigs, bags were getting snatched by the terrifying gang members. Following a public outcry, they retreated back to the estates.

Estates like Kayole, Dandora, Huruma, Mathare in the Eastlands are infested with these young lethal criminals who’ve not only been terrorizing locals but are very ready to kill. Gangs like Gaza whose membership is young men and women in their teenage have been a thorn in the flesh, they’ve been targeting police officers some of whom they’ve killed, cops have retaliated in a clean sweep response. Most members of the criminal group have since been killed.

Approximately, cops have fallen over 100 members of this parasitic group. A visit to Facebook group ‘Dandora Crime Free’ which is run by undercover cops, shows the levels of crime in the slums and how many of them end up being killed by police -Hessy.

Kenya’s justice system is favourable to the criminals as they get bailed out according to Hessy Wa Dandora whose perfect alternative for dealing with robbers is by shooting them dead or stoning by mob justice. Mobile phone snatching remains a top exercise for the thieves of Nairobi given that they’re easily moved. Smartphones are selling like hotcakes in the streets Just like Toyota so there are high chances of your phone being snatched in the streets than a box of chocolate.

After being mugged, people tend to forget about their stolen phones and moving on with their lives without reporting to the police. After all, there’s nothing much one stands to gain reporting a lost phone to the police since they’re ever reluctant to follow up and if the phone reported stolen was expensive, the cops would ask for bribe to trace it and even when you pay them, they’ll take you in endless trips extorting more money. Given this dead end, many prefer moving on with their lives, renewing SIM cards, buying New phones and forget everything.

However, as it’s now emerging, you’ve been putting your lives in grave danger by not reporting a stolen phone to the police. Several cases of owners of a stolen phone used to commit a crime elsewhere being arrested are on the rise a rise this must concern you. Leonard Kimutai a Langata resident currently in Industrial Area remand facing a robbery with violence charge is such one example. In November, he was mugged by thieves in town and lost his new Samsung S8 phone, like many others who find it lucky to walk out alive, he simply moved on buying a new phone. Having forgotten, January 5th would make his life take a whole New turn.

His Samsung phone that had been stolen in November had been linked to a crime scene committed in Kiambu where victims a father and his son were killed. His phone was tracked to the scene as the thieves had used it to call the murdered hours before the cold murder. They obviously used a different number but the phone is what left the marks back to him. With IMEI registration, it is easy to trace numbers used on a handset, long story short, Leonard is fighting a robbery case that would see him serve a long term in jail over a crime he didn’t commit, his only crime was not reporting stolen phone to the police. Were it that he had reported it back in November and armed himself with the abstract, he’d easily walk out but since he didn’t, there’s no easy way to convince the police that he wasn’t an accomplice to the crime.

There’s no uniqueness in this case as many similar exists and innocent people are being held in jail over a minor mistake. Criminals have developed New ways of interfering with crime scenes and sending investigators the wrong direction. We’ve had cases of them dropping a stolen ID card at a crime scene throwing cops in the wrong way, this is also another reason why you must always report a stolen ID, that abstract can save your life when you least expect it.

Some are also dropping used airtime cards picked randomly from the streets at their crime scenes. Investigators will map out the scene and use any simple exhibit for tracing, the used airtime card can be easily traced back to the person who loaded it and just like that you find yourself in a mess you didn’t bargain for. The advisable thing is to always destroy completely and dump safely a used card.

Cases like this are not many but you can’t take chances since they’re happening. Your stolen phone that you probably registered on your name can be sold to someone else or criminals use it to commit deadly crimes elsewhere, they can hide leaving you in unseen trouble. Good news is, you can avoid all this by simply reporting any stolen item not just a phone to the police. Reporting doesn’t necessarily mean recovery after all its rare to recover a stolen item in Nairobi, you’re simply reporting to cover yourself from a potential risk of being dragged into a criminal case that you weren’t part of.

Buying smartphones from unauthorized shops and on the streets is a risk, actually, avoid second-hand phones from unregistered shops since most of them buy from thieves and simply, refurbish and repackage. Don’t buy phone from people you don’t know and even if it’s from someone you know, always have a written agreement. You simply can’t afford taking any risk. Advisable to buy your phone and other items from genuine shops with all warranties and receipts for your security, it might be more expensive as compared to streets phones but worth it. Reporting to the police on your stolen phone, documents might be a tedious task but believe me, it’s not as hell as ending up in jail for a crime you didn’t commit. I hope this saves someone.

Cambridge Analytica Executives Secretly Filmed Admitting To Having Ran Uhuru’s Campaign And How They Stage Managed Everything.

Kenyan Court About To Legalize Homosexuality