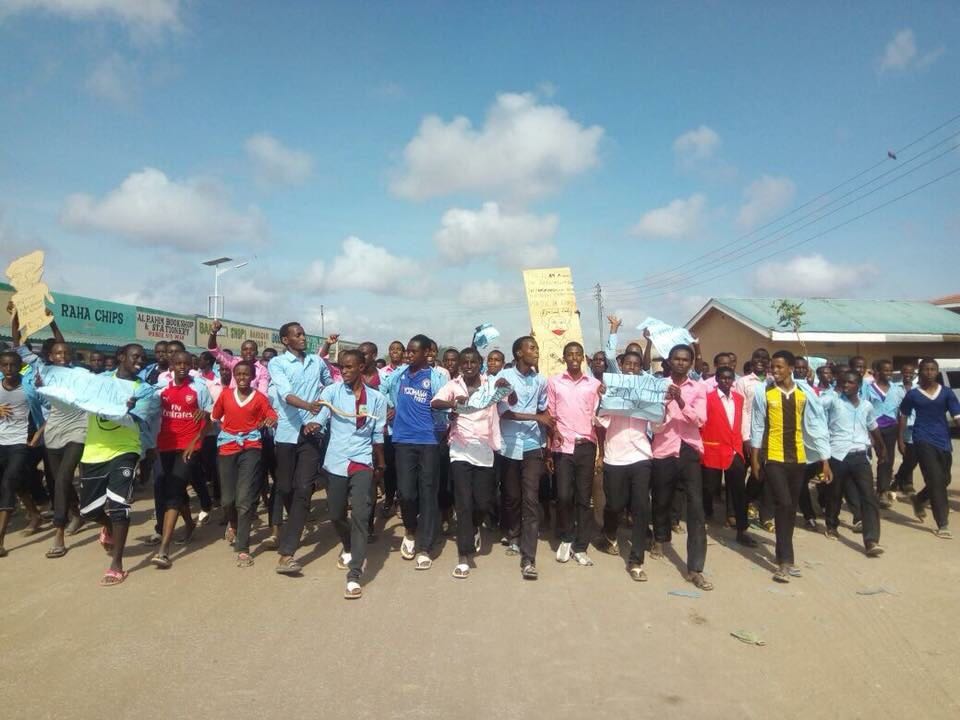 Students in NEP protesting against the mass transfer of teachers by TSC paralyzing learning in the region.

The acute shortage of teachers in the three counties of Garissa, Wajir, and Mandera is unsustainable and a time bomb waiting to detonate. Most public schools are either understaffed or no teachers completely due to an exodus of non-Somali teachers due to rampant cases of terror attacks. Some schools in the region are on verge of closure as a result.

The issue got worse when 28 Kenyans, 17 of them teachers, died in a terror attack on 22 November 2014. The teachers were proceeding for holidays.
While this unfortunate incident affected 17 teachers, it has to be noted that they were not targeted as the criminals behind this heinous act ambushed a bus in which teachers happened to be majority passengers. Since then terror has become the the major justification for transfers by the non-Somali teachers in these three counties.

TSC CEO Nancy Macharia has told Parliament that the commission is transferring all non-local teachers from North Eastern following a terror attack at Qarsa village, Wajir County on February 16 in which four people, among them three teachers, were killed. The decision has been met with resistance by the local communities and the leaders from the region.

By this move, TSC is playing into the hands of Al-Shabaab. It has to be noted that, casual withdrawal of non-local teachers by TSC, without a comprehensive long-term plan to address the problem, maybe a recipe for radicalization and exacerbate more terror attacks.

Surprisingly, the Kenya National Union of Teachers urging the government to make it a policy those local communities get teachers from their own locality. Yet, unconfirmed reports show most of the teachers leaving North Eastern region do so because they only applied for the jobs to get employed by TSC before seeking transfers to go back to their home sub-counties.

Notably, non-Somali teachers employed by private schools continue to stay. There are also other non-Somalis working in North Eastern who include civil servants, employees of non-governmental organizations and business people who have not left the area because of the sporadic insecurity incidents.
Let’s face it. Terrorism and insecurity, in general, has not been a problem that is specific to North Eastern only, but also in Mombasa, Kwale, Kilifi, Tana River, Lamu, Turkana, Pokot and Tana River.

We did not see the areas grapple with teachers’ exodus. Why only North Eastern? Does it mean that all teachers in these counties are all ‘locals’? What needs to be done to address the teachers’ crisis in North Eastern? The way forward Government ought to develop a blueprint that focuses on recruitment of O’Level school leavers from the region into teachers training colleges, lower the entry grade for P1 teachers in the area from C, establish more teachers training colleges in the region and improve the terms and conditions of teachers working in hardship areas. 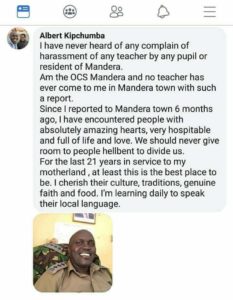 By improving the terms and conditions of teachers working in hardship areas will attract more people to pursue the teaching career hence solve the acute shortage of teachers in the region. TSC must also bring a policy where those teachers posted in the region have to stay in the area for a particular period before they can be transferred.

Related Content:  Is There Any Future With Urithi Coorperative Society

The government should also consider re-introducing hardship allowance for teachers based in hardship areas. The two levels of the government can also introduce scholarships for those pursuing the career so as to boost enrolment.

The recently established Mandera Teachers Training College provides the best hope of addressing the teachers’ shortage not only in that county but in the entire North Eastern region and must be supported by all. The number of teachers’ training colleges in the region should also be increased from the current two.

Residents of these counties see the move by the TSC as a continuation of their marginalization since independence. Even before the recent terror attacks,
North Eastern region had some of the worst poverty indicators in the country, just over 40 percent of primary-age children attending school, compared
with a national average of 77 percent.

Recent research shows that a large percentage of children don’t transition to secondary school and the few that do so, as little as 10 percent achieve the grades to get into a Kenyan university. For instance the past three years there was no A Plain grade from the region.

Ms. Duale is the CEO of Peace
and Charity Organisation of
Kenya [email protected]