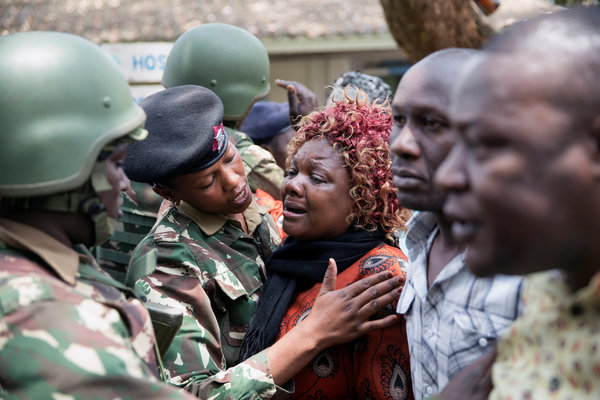 A parent who lost a child being calmed down by officers

On Saturday, my friend was held up in a meeting to find almost 10 missed calls. They were all from people who wanted to know if she had heard the news about Moi Girls High School fire. She had dropped off her only child a few days earlier at the school. They celebrated her birthday just two weeks ago.

Her daughter was in school, the one place we expect our children to be safe. School, where ignorance is replaced with knowledge through the efforts of hard working, overworked and underpaid teachers.

She rushed there, only to be met by armed police holding batons at the school gate. Let me pause and say this, the Kenya Police response to any disaster is to send armed police. They respond to everything with a show-of-force – a rather colonial tactic.

As my friend and other parents tried to get information on what had transpired and about their children, they kept being stonewalled by the school administration. She decided to visit the hospitals where the injured had been taken but her daughter wasn’t there. In the afternoon she found out that her daughter was in the list of 15 missing girls and the school had eight unidentified bodies. The school told her to go home at around 6 pm and they would get in touch.

Distraught, she went home. 16 hours after the incident happened she received a call; her daughter was among the eight who had perished. They will have to wait for her body to be identified through DNA. She didn’t deserve to die. We, as a country, let her die. We let her and her fellow students die. One lady who is an orphan lost her sibling in the Garissa University attack. On Saturday her small sister died at Moi Girls. My heart mourns with the bereaved families as l write this.

The Moi Girls School fire wasn’t the first of its kind. Unfortunately, if we don’t act with urgency, it will not be the last either. Some of the most memorable, tragic high school fires include Bombolulu Girls (25 girls died) and Kyanguli Secondary (68 dead). In both incidents, Commissions of Inquires were set up and reports produced, but were their recommendations implemented? Why can’t we, as a country, learn from past tragedies and protect our children? The dormitory hosting the girls was originally designed to host 80 girls initially. A few alterations were done and now it houses 300 students.

Moi Girls, where the fire started at 2am (a time when there is zero traffic in Nairobi), is only 10 minutes away from Nairobi Fire Station. Where were the fire fighters? They arrived two hours later and then ran out of water. Kenya has a useless National Disaster Operations Centre manned 24 -hours since 1998. It has failed us. Nairobi is a city of 5 million people and our fire brigade responded to one fire incident late and failed to contain it.

In these painful moments, as families mourn, we need to ask ourselves some hard questions. When we drop our children off to schools, we must know with certainty that dormitories, halls and classrooms have fire exits and extinguishers. Safety drills should be conducted periodically. Just because we pay school fees doesn’t absolve us from the responsibility of ensuring that the schools we take our kids to are safe.

Just because you went to a school where the dormitories were locked from the outside with a padlock doesn’t mean we should allow our children’s dorms to be locked from the outside. It wasn’t right then and it definitely isn’t right now. There are certain standards and regulations that we must ensure are upheld and we must hold our institutions accountable to these. A school should be safe. Our role as parents and teachers is to teach our children good values and instill discipline and care for the environment they study in. We, as a society, are failing in that regard. P.T.A’s and Alumni groups are good avenues for engaging with schools and ensuring our children’s safety.

The Ministry of Education has clear school safety guidelines for disaster and risk reduction – all school dormitory doors should be at least 5ft wide and open outwards. Every dorm should have clearly marked emergency doors in the middle and at the back. Moi Girls’ windows have grills yet the guidelines clearly state, “all windows must be without grills and easily open outwards”. Every dorm should have a fire alarm and fire extinguishers. If your child’s school hasn’t implemented this policy, then the Ministry of Education has failed to enforce these simple life saving guidelines and it’s time we as parents enforce them. Let us not wait until it is too late. The time is now. Today.

May the eight young souls, whose lives were cut short in their prime, Rest In Peace. We salute the two brave security guards who died saving lives. May God give strength to their families. To the injured, we wish you a quick recovery and we are praying for you. To the rest of us, commit to make Kenya better where you are.

The Maraga Ruling A Nightmare To African Tyrants