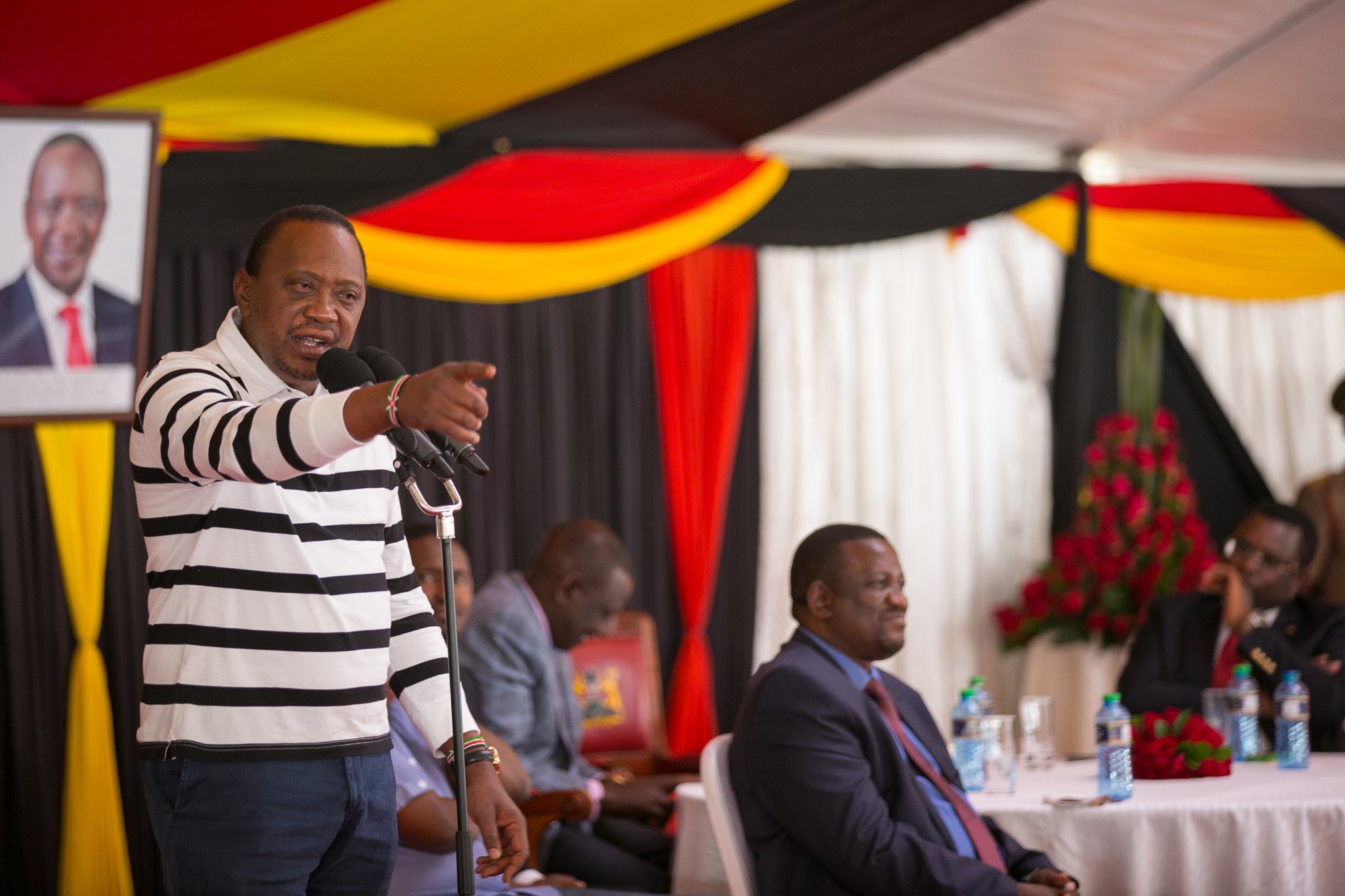 President Uhuru at Stwtehiyswwhen he hosted Jubilee elected leaders after his presidency was nullified.

After a lengthened period of uncertainty, the six judges holding the destiny of Kenyans in papers walked into the Supreme Court to deliver what would later turn out to be a landmark ruling, that nullified the election of president Uhuru as declared by IEBC. In a 4:2 ratio ruling, the court headed by Chief Justice Maraga made three key rulings;

“A declaration is hereby issued that the Presidential Election held on 8th August 2017 was not conducted in accordance with the Constitution and the applicable law rendering the declared result invalid, null and void;

An order is hereby issued directing the 1st Respondent to organize and conduct a fresh Presidential Election in strict conformity with the Constitution and the applicable election laws within 60 days of this determination under Article 140(3) of
the Constitution.” And with the powerful pronouncements by the strict CJ Maraga, Uhuru was stripped of his win and Kenyans sent back to the polls once again.

Expectedly, Jubilee having lost to the petition were angered but initially tried to contain it. In a TV address to the nation immediately after the declaration where Maraga was specific in his ruling that IEBC conducted a shambolic process, ignoring the law thereby sabotaging the integrity of the presidential election. A dejected Uhuru accepted the court verdict even though disagreed. And we thought all would end there not knowing a well laid out onslaught on the Judiciary singling out the individual judges who nullified the election had been laid and was about to be unleashed.

From Statehouse, Uhuru together with Jubilee politicians headed straight to Burma market, predominantly occupied by Kikuyu natives and largely Jubilee supporters and this was the breaking ground for the judiciary attack. The President openly called out the judiciary and particularly Maraga a ‘Mkora’ translated as thugs. He alleged that the whites conspired with the judges and we’re bribed together with NASA to cancel his win.

Funny how the president quickly forgot that the same whites praised the election and his own lawyers used the international observer’s clean bill of health on the election in court as a justification that IEBC ran a clean process. Carter Centre led by John Kerry the former US Secretary of states, the European Union amongst key international agencies including United Nations and even world leaders including President Trump and Ban Ki Moon, both congratulated and endorsed his election that turned out to be a sham. Therefore, it was a plain lie for the president to claim that the West conspired against him while all indicators show they were indeed rooting for him.

However, Uhuru and Jubilee are being tactical and the attack on the judiciary and the West is a similar campaign strategy that was run during 2013 when the two principals were before the ICC. Jubilee has perfectly hatched a plan to sacrifice the Judiciary through public execution for their re-election at the expense of democracy and integrity of the court. Like they fabricated in 2013 that the Mzungu worked with Raila to hang them in the Hague thereby mobilizing the Kalenjins and Kikuyus to gang up and reject ‘neo-colonialism’ a false script that somehow played out for them, it is 2013 all over again but this time, the same Mzungu is using Raila but the Supreme Court to take power from them. The ‘Mtu wetu’ hogwash is back in play and they must be saved. But this Mzungu against us narrative is losing taste by every munch, he accused the West of ICC predicament then went ahead to use British lawyers, Jubilee campaigns since 2013 are run by the same Wazungu to date from Tony Blair to Cambridge Analytica.

Related Content:  Dan Okwiri: My Memories With Governor Oparanya And The Sex At Kenya Airways

Thinking rightfully, if Jubilee is satisfied that their win was genuine and the court wasn’t fair then they shouldn’t be okay going into a fresh election with the same IEBC that has cost them the presidency. If there’s anyone that Jubilee should be absolutely angered with then it is the IEBC. The IEBC incompetence cost Uhuru his win and nothing else. By endorsing and insisting with the same suspect electoral body to conduct the fresh elections, Jubilee to me is sending a clear message that they’re okay with a shambolic process, that a shambolic process is beneficial to them and that IEBC is a special partner in crime. Why would you be okay with an injured player in the field if you’re going for a win?

Jubilee for time now has been either in sync with IEBC or speaking for IEBC and even after the nasty expose in the Supreme Court, nothing has changed, in fact, they’ve boosted their support and defence on the same IEBC found guilty of running a fraud election putting into question the real relationship IEBC and Jubilee have. The onslaught on the judiciary by Jubilee is unfortunate and exposes the real colors of the regime and respect to the rule of law. They’re already giving clear signs of authoritarianism and selectivity in respecting the rule of law.

Kenya Insights allows guest blogging, if you want to be published on Kenya’s most authoritative and accurate blog, have an expose, news TIPS, story angles, human interest stories, drop us an email on [email protected] or via Telegram
Related Content:  Dan Okwiri: Why KQ’s Nairobi-New York Flights Have Failed
Related Topics:
Up Next