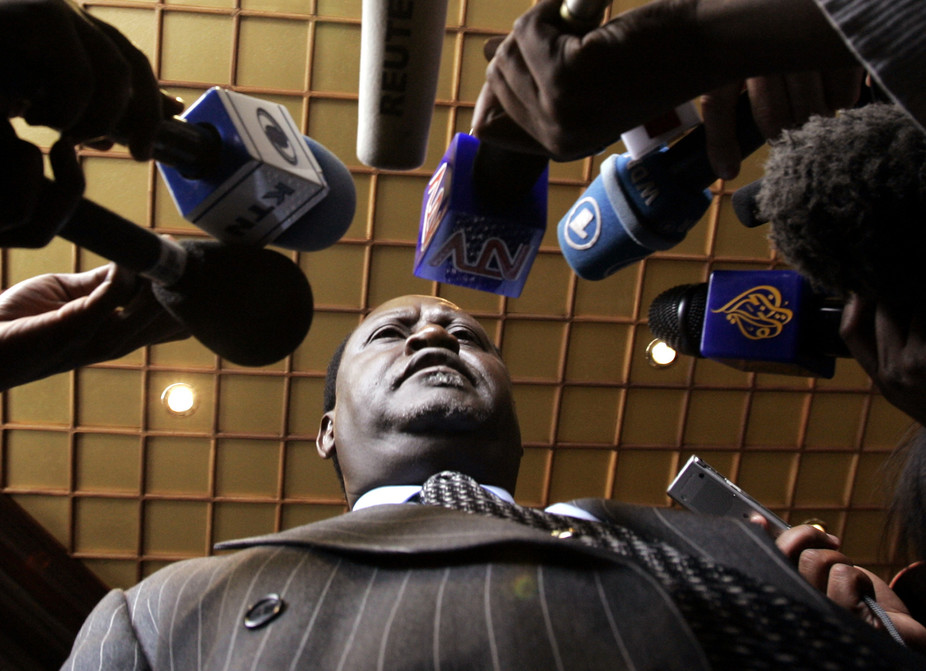 Raila Odinga addressing the media at a past event.

If it’s predictable, it’s preventable; NASA cried foul way before the election and their presidential candidate Raila Odinga was dismissed as a perennial loser. Elections came; IEBC declared the incumbent Uhuru Kenyatta the winner amid opposition claims that the vote was rigged.

In an election that had earlier been described as Raila’s ‘last bullet’, he never stopped at the IEBC declaration; he dragged his feet a little but eventually chose to challenge the process that brought the Uhuru ‘victory’ in court.

In fact, the president’s side (Jubilee) urged Raila to go to court if he felt aggrieved, ‘Use the wonderful legal mechanisms’ Kenyatta said but it’s the ruling that stunned Jubilee. The least expected happened their victory was overturned by the Supreme Court. Chief Justice David Maraga declared Uhuru’s re-election, invalid, null and void. New York Times described the ruling as a major service to the rule of law.

The court outcome is the exact opposite of what happened in 2013, Raila’s petition was dismissed and the opposition was urged to accept and move on but what are we experiencing now? The executive led by President Uhuru Kenyatta has launched a scathing attack on the judiciary, calling Supreme Court judges a bunch of crooks and promising to deal with them if he gets re-elected in the fresh polls scheduled for Tuesday, October 17th, 2017. Such warnings have been sent to Mombasa governor Hassan Joho, he was frustrated and his security withdrawn a number of times.

Jubilee had tricked its way back to power, laid back celebrating with their lawyers as well as those of IEBC defending what was not challenged in court, the numbers. Opposition challenged the process that court found unfair. Jubilee knew the court process was not anything new, it was a movie
Kenyans had watched before and knew the script until reality checked in. Kenya became the first country in Africa to declare presidential results invalid.

All these anger being directed to the Judiciary is misplaced; Jubilee relied on their financial muscles to even odds, buy the mainstream media and may be three or four IEBC staffers but they forgot they are facing the most rugged if not fierce opposition leader in Africa.

Raila Odinga is not a featherweight politician, he is never short of surprises and he has been in the game for a minute to be dismissed as one with ‘the last bullet’. With integrity at par with experience and service over ambition, Raila has lived and learned, making major strides ahead and minor steps back. He has unmatched fighting spirit, amazing source of intel plus he is ever relevant with his eyes set on the prize, to clean the system.

As Uhuru struggles with every leaf to save his presidency, Raila, the poster child of Kenyan democracy must be aware that there is no victory without sacrifice. He should ensure no stone is left unturned as he puts up a spirited fight to grab Kenya from ‘Mr. Money Bags’, incorrigible and corrupt to the core individuals salivating to take the burton from President Kenyatta.

Mainstream media also has an opportunity to redeem its soul that they sold to the executive, proper coverage and informing the public is how in the coming fresh polls. Not trooping reporters to read illegal provisional results at the Bomas despite bragging of deploying over three hundred reporters
across the country.

Kenyan media have demonstrated that they can give live coverage to a president threatening judges and black out Kenyans being massacred. That’s what you do if the benefit from the Eurobond loot anyway, abusing the protection you have in the Constitution. It’s amazing how the media for the love of the money has been pocketed by ‘test tube politicians’ who did not fight for its freedom.

Media has failed to break down the voting process, knowledge of the Constitution still remains only with the legal minds when the media is illegally running Presidential Delivery Unit (PDU) ads. Authoritative reporting is still lacking despites the media freedom of gains in the new constitution and because of this, Kenyans and the media are looking at the Supreme Court with shock and horror because they have gone ahead of the media.

We Have A Psychotic, Insane Education System That Stamps The Humanity Out Of Our Children