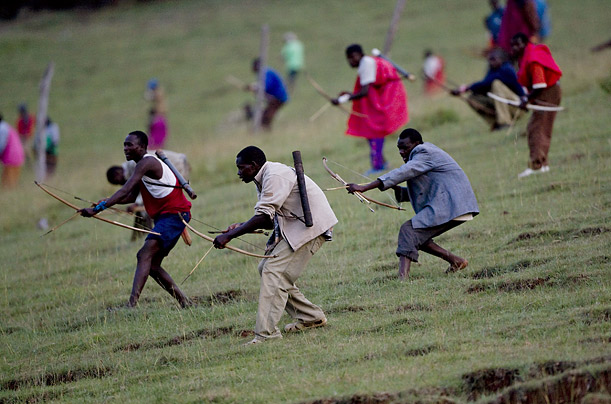 File photo from 2007 violence, militia group advancing for an attack

2007-2008 Kenya had it’s share of dark moments. Following highly contested elections the country plunged into war, neighbors turned on each other slashing, torching, looting, raping and doing all kind of inhuman acts.

A war between tribes is what it escalated into, lives were lost through butchering and police executions. Women were raped, men forcefully circumcised with broken bottles. It is not news to any Kenyan or any other person following the case that innocent people were cornered at a church in Kiambaa and burnt alive to death.

Rift Valley was the epicenter of the PEV with ethnic cleansing, Kalenjins ganged up against the Kikuyu community whom they perceive as outsiders (madoa doa) who occupies their land and resources. The ugly historical injustices once again showed its face leading to worst ethnic violence.

Uhuru and Ruto both ethnic leaders of the Kikuyu and Kalenjins in this perspective, find themselves before the ICC as the chief perpetrators of the PEV. As destiny would be, a marriage was built out of the big mystery and Jubilee Alliance was born. The marriage of Uhuru and Ruto for the 2013 elections temporarily buried the hatchet between the two conflicting communities. Peace prevailed and despite conflicting factors left untouched, the marriage of the two leaders reconciled the Kikuyus and Kalenjins who unlike 2007 were now on the same political side in 2013. Jubilee won and no firm of violence was witnessed.

Fast forward to 2017, the Jubilee marriage is still intact but there’s fear of violence in the Rift Valley and more specifically in Uasin Gishu country where ‘madoadoa’ the Kikuyus are living in fear as the election date approaches. Governor Mandago has publicly cautioned the Kikuyu community against voting for Buzeki who’s said to be a DP Ruto’s project. Mandago and Sudi are under hate speech investigations by the NCIC. However, there’s less to expect from a toothless political body that has in many occasions acquitted publicly guilty persons as Moses Kuria.

Even in the marriage, suspicion has dominated with emergence that members from Uhuru faction were the one’s who built the case and took Ruto to Hague. This brought murmurs that were later silenced, momentarily. Power sharing has also been a factor with the Kalenjins feeling short changed in what they perceive to be an equal share union. They’ve felt like second class shareholders. These however aren’t as inconsequential.

Peace stability of the Rift Valley is a serious concern especially now that it is becoming clearer by the day that what we have is a blanket reconciliation and cosmetic peace between the two communities. The factors that led to ethnic cleansing have remained the same and unaddressed and that this peace hangs on the Uhuru and Ruto marriage. Political truth is the two won’t last forever, what happens when Uhuru and Ruto break ranks which by the way is imminent in the next four years. What will happen? It will be back to the basics situation. If Mandago and group can speak publicly inciting and creating animosity while jubilee marriage is still on, what would they say or do when the Jubilee marriage is over?

Uhuru and Ruto have wasted opportunity to genuinely reconcile the two communities sitting on a time bomb. They’ve had the chance and power to adequately address the factors that have been the conflicting grounds. Instead, The two have been power brokers in Nairobi instead of peace brokers in the community, recipe for disaster. TJRC gave recommendations on how best to address the Kikuyu-Kalenjin conflicts but Jubilee hasn’t implemented the report. The land is particularly the greatest factor but it has been untouched. While leaders close their heads down on the temporary jubilee marriage that is the only thing holding the peace together, avoiding to make a lasting solution by implementing the TJRC recommendations is nothing but baiting disaster. Failing to find a lasting solution instead opting to play around them is performing a foreplay to disaster.

Related Content:  Season of Rewarding as President Uhuru Recycles Old Guards in New Appointments
Kenya Insights allows guest blogging, if you want to be published on Kenya’s most authoritative and accurate blog, have an expose, news TIPS, story angles, human interest stories, drop us an email on tips.kenyainsights@gmail.com or via Telegram
Related Topics:ElectionsKalenjinKikuyuOpinionPeacePolitics
Up Next

Kenya’s Presidency; So Close Yet Too Far For Women