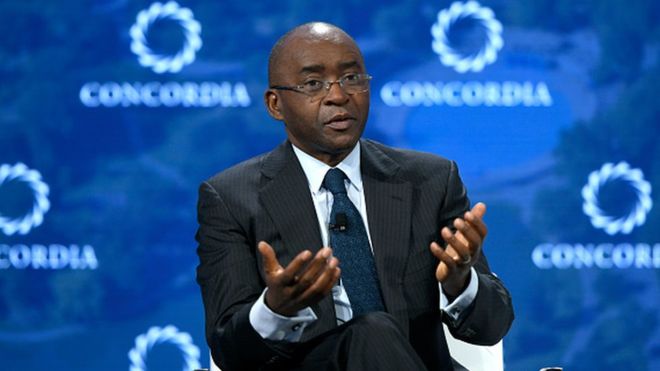 HARARE, Zimbabwe (AP) — A billionaire has offered to pay striking doctors in Zimbabwe to help end a months-long protest over grave hospital conditions as the economy crumbles, and a doctors’ group on Thursday said it was encouraging members to embrace the money and return to work.

But Dr. Masimba Ndoro, vice president of the Zimbabwe Hospital Doctors Association, warned that “nothing much has changed” in the conditions at public hospitals that include the lack of basic items such as bandages and gloves.

Relatives of patients are still expected to buy such items and, in some instances, bring buckets of water as Zimbabwe’s once-envied health care system reflects the southern African nation’s general collapse.

“It breaks a doctor’s heart to ask a patient who clearly cannot afford bread to buy their own blades, bandages and even dressing solutions, painkillers and antibiotics,” Ndoro said.

Doctors abandoned work four months ago to press for better salaries and working conditions, saying their roughly $100 monthly pay is not enough to get by. The action became one of Zimbabwe’s longest doctors’ strikes in history.

The majority of people in Zimbabwe already are battling to put food on the table, let alone afford expensive private medical care or drugs.

“It is in the interests of both the patients and the doctors to go back to work,” Ndoro told The Associated Press.

He said his organization, which represents about 1,600 junior doctors at public hospitals, is asking members to accept the offer by Zimbabwean telecoms billionaire Strive Masiyiwa.

Masiyiwa through his charity late last year offered to pay doctors a “monthly subsistence allowance” of roughly $300. Doctors are also offered transport to and from work.

The Higherlife Foundation charity announced Tuesday that it had reopened the offer, which more than 300 doctors had signed up for before it closed in December.

Ndoro said more needs to be done to fix the health sector.

Often the best a doctor can do is diagnose and write a prescription for patients who usually ask relatives for help to buy drugs at private pharmacies, where prices are steep because of shortages at public hospitals.

Critics say the collapse of Zimbabwe’s economy is making hollow President Emmerson Mnangagwa’s promises to change the country’s fortunes when he took power in 2017 after longtime leader Robert Mugabe stepped down under pressure.

Since then, inflation has spiked to about 500% amid shortages of gas, food and even drinking water. Electricity cuts of up to 18 hours a day have led some rural hospitals to ask relatives to take bodies to private funeral parlors or conduct quick burials to keep them from decomposing in their mortuaries.

Health Minister Obadiah Moyo on Wednesday told the state broadcaster that the situation is improving.

“They (doctors) are back in full force. We want to be able to work together as one team, everyone has a role to play,” he told the Zimbabwe Broadcasting Corporation.

But many doctors and other health professionals such as nurses seem to share little of the minister’s optimism and are looking for a way out.

“I don’t have the actual numbers but many doctors have left the country,” Ndoro said. “A lot are pursuing greener pastures. They may not yet have left, but they are definitely going to leave.”

Related Content:  Six Storey Building Collapses In Kariobangi South Another Case City Hall Impunity
Kenya Insights allows guest blogging, if you want to be published on Kenya’s most authoritative and accurate blog, have an expose, news TIPS, story angles, human interest stories, drop us an email on [email protected] or via Telegram
Related Topics:
Up Next