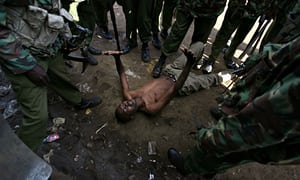 A protester pleads for mercy on being rounded up by police

In politics, perception is everything and facts don’t necessarily change people’s minds, for this reason, intelligent politicians put their all in propaganda merchandise. In ten days Kenyans will be going to the voting booth in what is a tightly contested election. Recent polls don’t predict a clear winner between Raila and Uhuru. Experts are predicting a run off which both sides are trying to escape by all means for a first round win.

The human mind is such that it can be manipulated and politicians know a brainwashed voter is the best tool of the trade that’s why you’ll listen to a supporter making some bizarre accusations against an opponent that leaves you stunned. Kenya in 2017 has witnessed perhaps the most complex psychologically weaponised campaign in recent history. But not many feel it, a matter of fact they’re not supposed to believe it, so the strategist keep releasing toxins consumed unknowingly.

Just to give the levels of an active psychological warfare in politics, in 2013; Jubilee strategists developed ideally three best weapons that did not only ensure a win for Jubilee but provided a smooth power transition. First, there was the tyranny of number hypothesis developed by a now disgraced vlogger Mutahi Ngunyi, with numbers manipulation, Kenyans were mentally prepared that a Jubilee win was inevitable given high numbers of votes in Jubilee regions, experts have argued this gave a safe leeway to manipulate votes in favor.

Secondly, there was the ICC train where Uhuru and Ruto played victims of Western manipulation, to their voters they were potential martyrs being crucified in outside country with blessings of Raila whom they sold as the Mzungu puppet. While it is entirely untrue because the two ended up in ICC following investigations by various agencies, the supporters bought this lie; it gave them sympathy and revolt vote, turnout was exemplary in Rift Valley and Central. To them, this wasn’t just an election but a rescue mission for their sons. Now that’s a successful psychological missile mission.

Related Content:  Grand Scheme: How Uhuru is Simply Trapping Raila into His Comfort Zone The Electronic Voting System And Will Beat Him Hands Down

Lastly, ‘peace’ campaigns were heightened, this was a simple, easily swallowed strategy to lull the expected charged reactions. People were told to embrace peace despite anything. The courts, IEBC ran peace slogan campaigns you remember the accept and move on. Typically, oppressive regimes will use this to get away with any malpractice. Minds are tuned to believe that questioning anything in the process amounts to being violent. The peace they use to buy silence. Silence doesn’t equate to peace but to them that doesn’t matter.

Looking at 2017, a similar scenario is playing. There has been a single narrative of possible violence. Many people have been asking me this question as to whether there will be violence and if so then who would be behind the violence. My answer has always been simple, look around, who stands to benefit more from a possible electoral violence? Who’s the loudest on the violence warnings as the tongue only speaks that what the mind knows? Lastly, is the election predetermined that we already know the winner and expected reactions? If there’s anything that bothers me is as to why security agencies preempt violence probably from real or imagined intelligence and do nothing to prevent rather waiting to repel. If we’re looking at organized and coordinated violence, then the intelligence capture would by now have the key perpetrators under lock.

Opposition leader Raila Odinga has perhaps been worst hit with character assassination campaigns which have strategically been launched to paint him in the public picture as a perennial loser, this was the argument also used by IEBC during the petition to discredit CORD, arguable narrative but always a defensive track for his opponent. Raila has been painted as a violent character. If you’re keen on social media campaigns, you must have come across dedicated pages churning hate material portraying Raila in the violent light.

Jubilee politicians lead by the principals have been echoing the Cambridge Analytica’s online hate campaigns calling the opposition leader a violent man who doesn’t love peace. You’d be lucky to get an instance the accused has advocated for violence should you make a challenge. If you look at the pattern of this well-coordinated campaign, you see that violence has been preempted and a decoy owner planted. In the public and international community’s face, Raila has relentlessly been smeared and walking around as the man of the violence so should it erupt then we know where the fingers will be pointing.

Fear of violence has seen massive relocation for the perceived hotspots named by the police; it’s laughable when they’re now threatening to arrest those fleeing for causing anxiety yet their announcement did. We’re seeing police officers displaying anti riot weapons in opposition zones; they’re even having open air combat training on dealing with rioters. This is aimed at nothing but scares mongering.

We have made elections in Kenya a dangerous game. Fear mongering and displacement of voters is also a strategy. As of now, buses to Western Kenya are fully booked till 8/8, flights out of Nairobi sold out. Who’ll benefit from a possible violence post 8/8? Why are we having highest security deployment in opposition areas? The only answer could be a Jubilee win is written and protests expected. This brings us to the question, how free is the election of the winner is already known, and why are a looking at the violent reaction of the process and win will be fair? Read the pattern, answer questions and you’ll have the owner of this violence. Keep in mind that political violence are never spontaneous as you look for the owner.

Related Content:  With A Unified NASA, The Election Is For Jubilee To Lose
Kenya Insights allows guest blogging, if you want to be published on Kenya’s most authoritative and accurate blog, have an expose, news TIPS, story angles, human interest stories, drop us an email on [email protected] or via Telegram
Related Topics:
Up Next