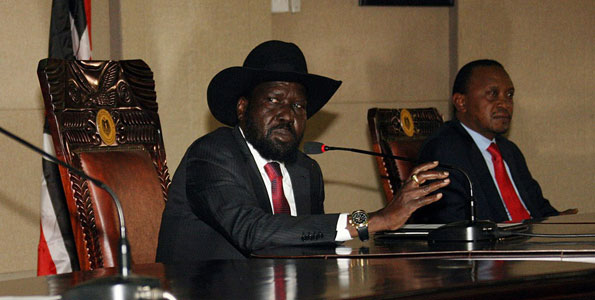 President Salva Kiir and Uhuru at a past meeting

On the 13th day of June 2016, life took a shocking, unexpected turn when four Kenyans who were working for South Sudanese government officials were sentenced to life imprisonment of 72 years in a puzzling legal process. Clueless of what was going on, the four Kenyans were victims of a great war within the office of the president in what has turned out to be a fabricated corruption case within the agencies but a power measuring and neutralizing war amongst the officials including President Salva Kiir.

The abduction/kidnapping of Susan Anyieth from Nairobi, Kenya on 1st October 2015 by rogue elements from the South Sudan National Security Service with the help of the Kenyan Anti-Terrorism Police Unit (ATPU) and the National Intelligence Service (NIS) without due process of the law. This was done with total disregard to the international laws of extradition treaties. She was just a house wife, and she was forced to leave behind her 2-year-old son without anyone to take care of her. Just like her husband and the rest, she would be sentenced to life imprisonment with the fabricated charges and without legal presentation. In the next sequel, we will break down the high table politics and the intrigues of this international law contravention. 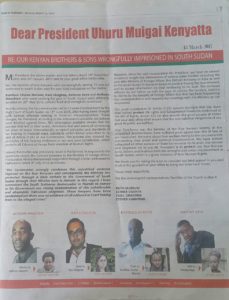 Full page paid advert of a letter from the restless family members of the four Kenyans pleading for President Uhuru’s intervention.

The unfairness in court started from the very beginning when the judge set bail per person at $14 million USD. Their lawyer was forbidden to meet with his clients unless during the trial. Continuous intimidation to witnesses by National Security and exactly a month into the trial the lawyer, Kiir Chol was threatened at Gun point by National Security, whose written communication was snatched away from him and his clients’ and forced to drop the case.

Families then approached Majority Leader, Hon Aden Duale who questioned the ministry on the penalty and received a response from Hon. Amina Mohamed as below:

“The Government strongly condemns this unjustified sentence imposed on the four Kenyans, and consequently the Ministry has protested through a Note Verbale to the Government of South Sudan through their Mission here in Nairobi. In this regard, I have summoned the South Sudanese Ambassador in Nairobi to convey to his Government our strong condemnation of this questionable and ridiculous judgment. These Kenyans have been condemned, yet there was no evidence at all adduced in Court linking them to the alleged crime.”

The families have been to every relevant office in the Republic of Kenya to try and get assistance to bring these Kenyan Sons home.

11th of April 2017, The Court of Appeal in South Sudan quashed the case and sentence for these Kenyans and ordered a Retrial. However since the verdict was announced, the lawyer for the Kenyans got barred from practicing law in South Sudan. Judiciary there after also went on strike and their demand is a dismissal of the current Chief Justice which stands to date.

Families have written several times to the President;
H.E Uhuru Muigai Kenyatta and also published full page adverts on Nation and Standard to get his intervention. Following the paid page plea to the president, the office of foreign ministry moved quickly to save face. Typical of PR scoring system, Kenyan ambassador to South Sudan Cleland Leshore visited the four Kenyans jailed in South Sudan 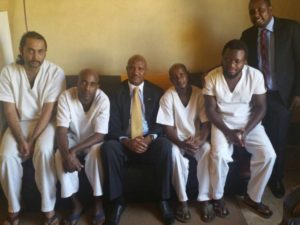 over fraud claims for selfies to water down the public heat.

Via Twitter during those heated moments, the ministry said: “It is not true that the [South Sudan four] have been ignored.”

It added that it has been following the proceedings keenly but “cannot prosecute the case in public at the risk of jeopardizing negotiations and an appeal pending at the Juba High Court.”

The families were promised a full briefing, but it was noted that the case is “extremely sensitive” due to the “colossal amounts involved” and aspects touching on the office of the South Sudan president. Little or no follow up has been done. To date, families have never received a response from the government. Naturally, the government has the obligation of ensuring none of its citizens are jailed abroad and must employ diplomacy talks for release and repatriation. Somalia recently secured the release of 114 prisoners from Ethiopia after diplomatic deal cuttings.

While Uhuru and Foreign ministry officials led by Amina continue to buy time for unspecified reasons wrapped under diplomatic jargon, the four Kenyans continue to face harsh life in the South Sudan Prison and their families in Kenya spending sleepless nights and days filled with agony. It is 11 days to the election and if Uhuru losses the election, abandoning of these Kenyans will pile to his list of failures. If he retains power, the case will be a reminder of failed diplomacy. Kenya and South Sudan enjoy a cordial relationship, it is puzzling Kenyans are rotting abroad in a case that pure diplomatic air down would square instead, the government of Kenya has resorted to cat and rat games with families while allowing these Kenyans to suffer at the expense of power plays in South Sudan government.