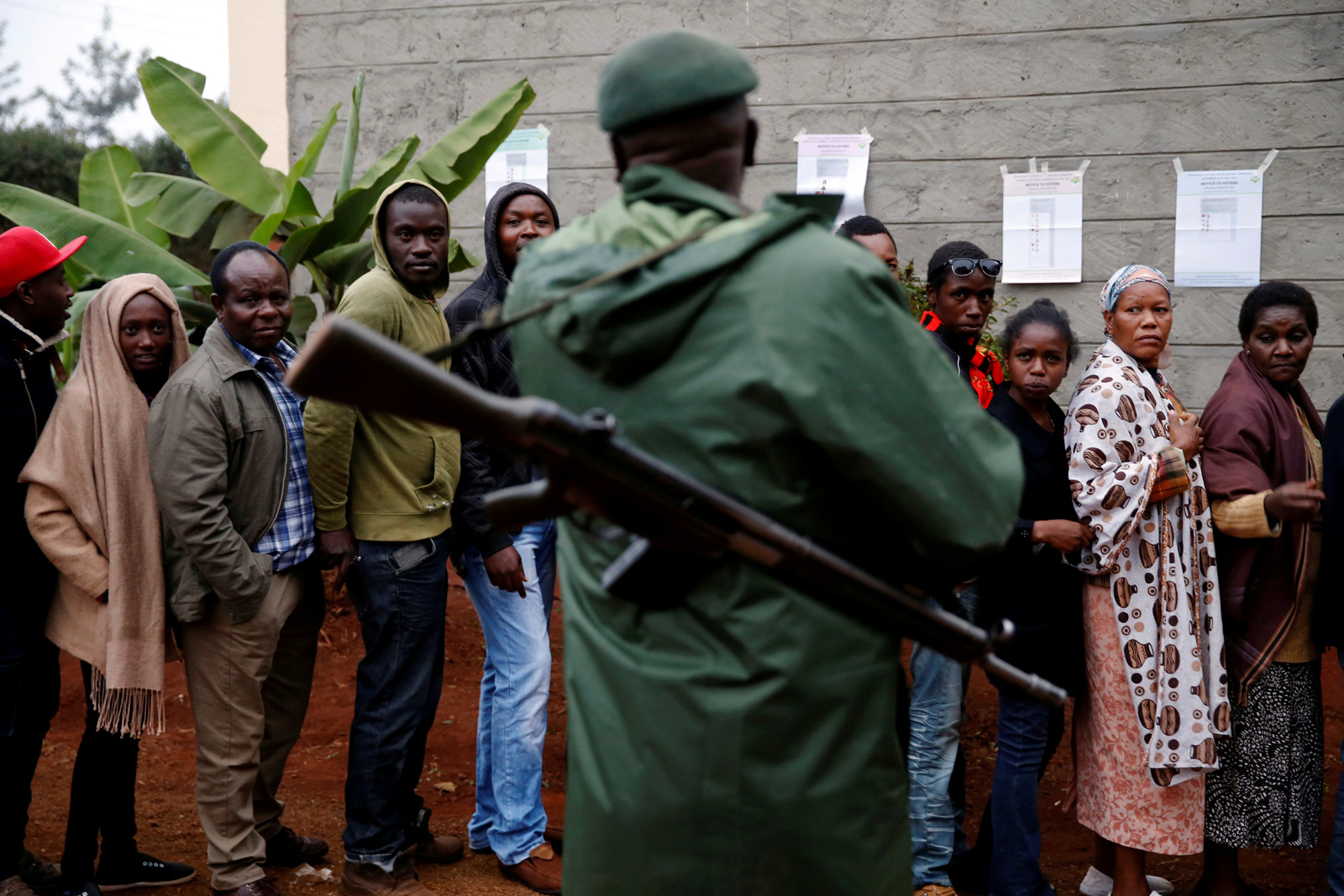 A police officer looks over voters during the 8/8 elections

Date set for Fresh Presidential Elections,17th October is still on weighing balance but polls must be within 60days as stipulated in the Constitution. No need to hurry for a second shambolic electoral process without reforms in all aspects in the Commission.

Realignment in the Electoral Commission.

Before planning or putting anything in place,IEBC should wait for Full Judgement from Supreme Court of Kenya which was to be provided after 21days from judgement day. Everything so far IEBC has set in place should be just back up but 90% should be as per the Court Order. Some will be impossible to accomplish within their stipulated time and would need some quite time which failure to comply to them will be contempt. The Independence of the Commission is Coarse and they must accept to fact,they are on public watch and their acts must be in line with public interest as they are on Second redemption

Provided Chairman Wafula Chebukati appointed 6-Project team to oversee the Fresh Elections is not a big deal when still the old crooked Chiloba’s team are still in office though not active. They will still have greater influence through backdoor. The following moles once out,might water down threats to boycott the polls: CEO Ezra Chiloba,Directors Immanuel Kassait,Commissioner in charge of ICT Prof.Abdi Yakub Guliye,Head of Legal Affairs Praxidis Tororey,Ms Betty Nyabuto and Director of IT John Muhati.

Involve All Stakeholders in Every Undertakings

The Electoral commission thought their new appointees would be appreciated as smart move since it excluded CEO Chiloba,unfortunately it didn’t but instead sparked fresh integrity issues and discrimination from stakeholders. The appointees were no much better from victims of Electoral fraud circus.

1. Marjan Hussein Marjan (Appointed as Project Coordinator) who is the Deputy CEO.Works under instructions from CEO Chiloba who is much affiliated Jubilee Party

2. Dr. Sydney Namulungu (Appointed as Head of Operations) who Served at the IEBC Headquarter as the Training Manager under the Directorate of Voter Registration and Election Operations. As the Training Manager, he worked under Immaculate Kassait. In 2013 he was Team Leader for Jubilee in Central Kenya thereafter the 2013 General Elections, he was moved to Kakamega as the Regional Election Coordinator. In the 2017 General Elections, he worked as the County Returning Officer for Kakamega.

3. Nancy Kariuki (Appointed as Head of Logistics) who Served as the Manager for Voter Registration under the Directorate of Voter Registration and Elections Operations headed by Immaculate Kassait. After the 2013 General Elections, she was moved to Central Region as the Regional Coordinator. In the 2017 General Elections, she was appointed as the County Returning Officer for Mombasa and came to limelight when attempted to frustrate by delaying to present him his Certificate. There were multiple Electoral fraud involved which she tolerated for the benefit of Jubilee Party in the region.

4. Albert Gogo (Appointed as Head of ICT) who has worked as a Constituency Elections Coordinator and Returning Officer in Mombasa whose supervision are under Immaculate Kassait.

5. Bernard Miseti Moseti (Appointed as Head of Training) who is alleged to be Ben Miseti who acted as the Returning Officer for Bungoma still under supervision of Immaculate Kassait.

6. Silas Rotich (Appointed as Head of National Tally Center). The only among the 6 who Jubilee has not rejected which leaves endless question marks over the endorsement. Silas Rotich worked as County Returning Officer for Nakuru County. Previously, Rotich works as a Constituency Elections Coordinator under the Directorate of Voter Registration and Elections Operations.

“1. First, you issued a Memo to the Commission’s staff dated 1st September, 2017 referenced IEBC/CEO/1/1/09/2017; In the said Memo, you appear to contradict the position adopted by the commission and communicated by the Chairperson on behalf of the Commission via a Press Statement on the 1st of September 2017. Further the Memo also fails to appreciate the grave indictment by the Supreme Court in the above subject petition, with regard to the manner in which the commission conducted the impugned presidential elections. Respond and Explain the basis for your contradiction.

2. The Commission contracted Messer Al Ghurair, to print the Country’s ballot papers and various statutory forms to be used in the Presidential elections; under defined contractual terms and obligations. Respond and Explain what happened to the printed forms that were meant to have various approved security features and names of candidates printed in accordance with the ballot proofs and as verified by the due diligence terms the Commission sent to Dubai.

3. The Commission had contracted Messer MFI to avail printing and scanning machines across the Country, for use in the 8th August 2017 polls. Respond and explain on whether these machines were supplied – fit for purpose – as contracted, and where they were availed and failed to work, explain the failure.

4. The Commission spent about KES 848 Million to purchase satellite phones; the phones were to be distributed to each constituency and county tallying centers. Additionally areas with no network were specifically supplied with these devices, however none of these ever worked. Respond and Explain what occasioned the massive failure in the devices that would have been used in transmitting the results.

5. Mr Paul Mugo and Mr Boniface Wamae – under instruction from the Director, ICT Mr James Muhati, availed a Memo dated 31st August 2017, to the Chairman’s office through your office; which Memo confirmed the creation of a username account and a password in the name of the Chairperson of IEBC – without my knowledge or consent, and subsequently this account was used to undertake over 9,934 transactions. I direct that you take immediate action against these officers and report back by close of business [CoB] today.

6. Respond and explain what went wrong with KIEMS results transmission, where over 10,366 out of 40,883 polling stations sent text results without the accompanying Forms 34A. Noting that these polling stations had 4,636,556 voters registered therein. The failure is contrary to the plenary decision directing that where a presiding officer was unable to transmit the results [text and forms] from their polling station, they were required to move to the constituency tallying center or use the satellite devices where the same was available.

7. Respond and avail an explanation as to why 595 polling stations failed and/or otherwise refused to send any results for the presidential election.

8. Respond and explain why the Commission adopted and used a porous file server system to transmit Forms 34B;in the stead of creating and using a secure IP address; which made it easy for individuals to manage accounts on each other’s behalf – a clear security risk. Further respond and explain why the Commission used the subject server for day to day operations prior to the elections; and also; why the staff in the ICT directorate used passwords different from their IEBC passwords.

9. Some of the KIEMS Kits were assigned Orange and Airtel as their service providers whereas these two [2] operators did not have coverage in those assigned areas; worse still, Safaricom [a contracted operator] had the required coverage for these areas but were not considered. Respond and Explain why mapping out was not undertaken and these issues addressed and/or otherwise mitigated. 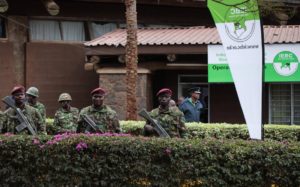 Armed officers stay on standby moments before the final results were announced.

10. Additionally respond and explain why the Commission experienced non-validation of individuals/voters after the KIEMS identification, essentially obfuscating the logs on voters cleared per polling station to vote. Respond on how many voters were subsequently allowed to vote by manual identification and why;

12. Lastly, respond and explain why KIEMS GPRS and Geo-fencing features were switched off from the 5th August, 2017.“

After this leaked Memo,Vice Chairperson Consolata Nkatha Maina with his team of 4 Commissioners who have split up as antagonists to Chebukati’s leadership came to disown his actions in defense to CEO Ezra Chiloba.This team led by the Vice Chairperson recently walked away from Chebukati’s meeting who was pressurising them to resign.Neither Chebukati has responded to whether this memo was a propaganda nor Chiloba hence it’s treated as authentic and the recipient must provide answers.

Doing Away With Brown Envelope Journos in Mainstream Media Houses

NIS have become Journalists and Journalists have become NIS  to spread lies and fake news to frustrate and witch hunt People’s watchmen.Recently KTN news had reported list of Social media accounts being investigated for hate speech mongering,ironically all the four bigwigs;David Ndii,Disembe Dikembe,Cyprian Nyakundi and Paul Ongili alias Babu Owino were not included in the authenticated list from NCIC.David Ndii who was accused don’t even operate in facebook as alleged to have made 5 hate speech posts.It was NIS in the newsroom who made the list to frustrate and send them a warning.

If it were financialy possible,it would be better if Fresh new Servers are purchased but it’s only a wish that beggars would ride on.Quoting myself,”IEBC would rather loose the case in the Supreme Court but fail to open servers for scrutiny to cover up the massive electoral fraud”.It happened exactly the way i had predicted,they lost the case but we shouldn’t loose in pushing for cleaning up of the Servers.

SAFRAN the Service providers Contract must be invalidated and contract agreement be awarded to different firm.

National Integrity and Integration Commission(NCIC) Must Stop Being Partisan

When Post Election Violence erupted after Presidential results declaration which favoured Uhuru Kenyatta,over 100 death were reported in Opposition Strongholds but NCIC through its Old Engine Chairman Ole Kaparo in a presser admitted he had not recieved any report over death case up to date.Worsening is a case of 6months old baby Pendo who went into a coma and later died because police brutality,9 year old Moraa,a school girl who was too shot while playing in the balcony during this period were just here says to NCIC.

Gatundu South MP Moses Kuria who inherited the throne from President Uhuru Kenyatta has become the ‘Untouchable Hate speech Monger’.He promised to manhunt over 70,000 people who voted for Opposition Presidential Candidate Raila Odinga,he told his followers to be ready to shed blood as they won’t allow loss in Presidential Elections.If no action is taken and this sentiments are again taken as here say by the Commission then let’s be ready for this country will burn to ashes.

The Deceit In Numbers On The Presidential Election In Kenya

We Have A Psychotic, Insane Education System That Stamps The Humanity Out Of Our Children