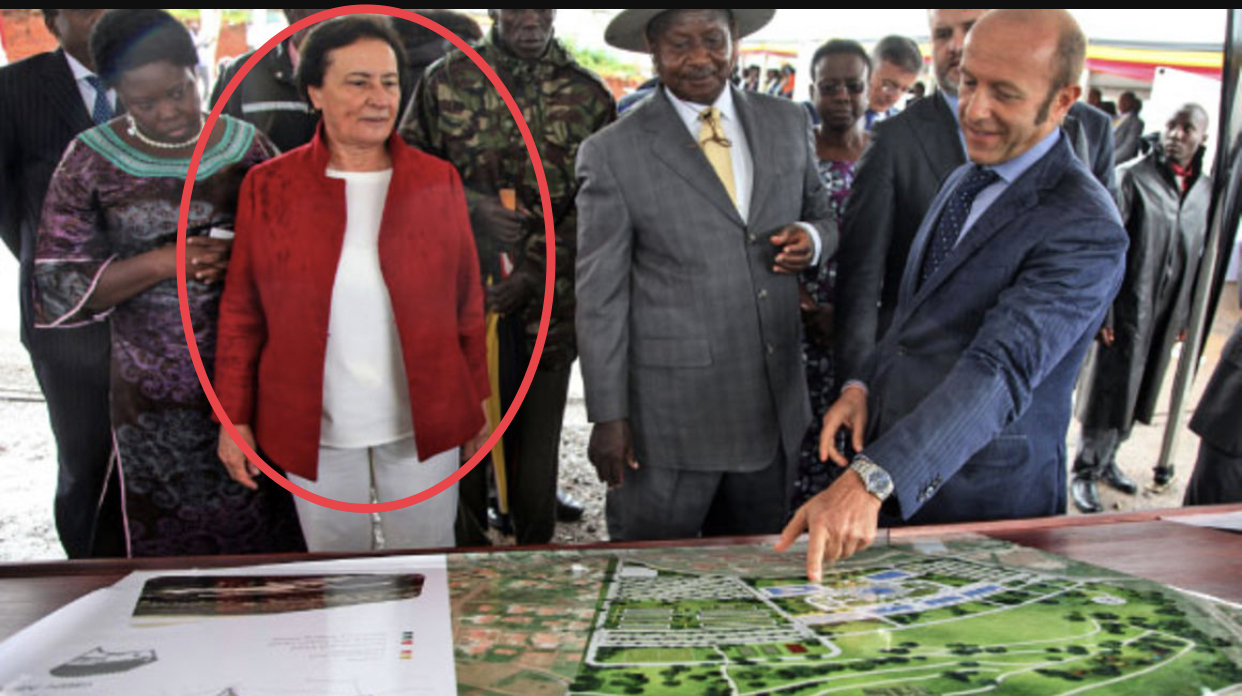 (Monitor)-A controversial Italian businesswoman, whose plans to use a government-backed multi-million dollar loan to construct the International Specialised Hospital in Lubowa on Entebbe Road, a project that has stalled for nearly two years, has had another project fall in her laps.

It will squat on land spanning about 27 acres and will be located near Kyagalanyi Coffee Factory, and Steel and Tube Industries, a geotechnical investigations report prepared for the company in 2020, reveals.

The coffee project— much like the hospital—is not without controversy, having received tax waivers from the government as early as 2017 to the consternation of lawmakers.

Also, as is the case of the hospital, there is no information to suggest that Ms Pinetti, or indeed her company, have experience in setting up such a project. There is no available information or testimonial evidence of the capacity of the company.

Public talk around the coffee company’s establishment started in 2014 when President Museveni received a delegation of investors from Italy led by Ms Pinetti. The company said it planned to add value to Ugandan coffee.
Uganda Vinci Coffee Company Limited had been incorporated earlier on January 9, 2014—about a month before the July 13, 2014 meeting with President Museveni.

The delegation, according to a State House statement, demonstrated their “seriousness” before President Museveni by roasting coffee seeds using a mini roaster. They also made the President to taste “different delicious samples that excited him a great deal”.

“I have spent a very long time trying to get somebody to add value to our coffee. Uganda has been a donor by exporting raw coffee,” a State House release quoted President Museveni as saying.

Apart from public remarks on the company by President Museveni, Saturday Monitor has found no evidence to suggest that any work on the implementation of the project has taken place in Namanve since 2014, until the Thursday signing.

Warming up to Pinetti

President Museveni had, however, committed—according to State House—to provide Ms Pinetti “with all the necessary assistance to ensure the project takes off soon”.

The government says the coffee plant is expected to process 60,000 tonnes of coffee per annum at full capacity. It also adds that the plant will start with processing 27,000 tonnes.

Related Content:  Why Kenya Has Pulled Out From ICJ Maritime Dispute With Somalia

The company, the Finance ministry says, is expected to create 246 jobs for employees and skilled labourers.

Ms Pinetti who is reported to have had close links to former Libyan strongman Muammar Gaddafi is described as “a good ally of government” based on the perceived closeness to President Museveni.

The good ally narrative appears in official Finance ministry’s records regarding the 2013 proposal to build and manage specialised healthcare at Entebbe Grade A and the Uganda Cancer Institute at Mulago in Kampala.

Located just outside Entebbe State House, Entebbe Grade A hospital a subject of fights between State House officials and Wakiso District local authorities has been left in ruins over fights on the utilisation of the prime land it occupies.

In 2019, President Museveni credited the businesswoman with the construction of the children’s hospital in Entebbe. This was despite accusation of her shady dealings in Libya and Chad. The said hospital—the Children’s Surgical Hospital in Entebbe—which offers free paediatric surgical care, is not affiliated to Ms Pinetti and her associates. The paediatric hospital is owned by Emergency, an NGO founded by an Italian surgeon and human rights activist, Gino Strada, to provide life-saving medical care. Strada died recently.

Ms Pinetti is not in any way affiliated to the hospital or the NGO, according to public records checked by Saturday Monitor.  Her known companies Finasi and Uganda Vinci Coffee Company Limited have no public connections to the hospital in Entebbe or the NGO that owns and runs the facility.

After more than eight years in slumber, the timing of the deal has also raised questions.
On February 2, Uganda officially withdrew from the International Coffee Agreement following a September 2021 notice to do so by Uganda Coffee Development Authority (UCDA) boss Emmanuel Iyamulemye Niyibigira.

In a February 9 statement, the coffee authorities cite trade barriers imposed through high tariffs on processed coffee by developing/importing countries, which disadvantage producer countries such as Uganda.

Uganda also cites the need for unconditional market access that allows for export of value-added coffee and not just fresh beans.

In a series of tweets, he argued that the country could not negotiate better terms while outside the organisation. He said the country had “scored an own goal”, prompting the UCDA to release a statement clarifying on why Uganda took the position.

Mr Kabushenga insisted the country could not effectively negotiate when it was out of the framework.

Hours later, the news of Ms Pinetti and Mr Kasaija signing the agreement was announced.

“Let me make a prediction. Sometime later this year, our friend…,” Mr Kabushenga said, tagging Ramathan Ggoobi, the Secretary to the Treasury and Permanent Secretary in the Ministry of Finance, “will ask for money to fund this investment. If and when this facility is ever built, export of green coffee beans will be banned and all roasting for export to be done by [Pinetti]”.

The US withdrew from the ICO/ICA in 2018, while Guatemala, a major producer like Uganda, left the agreement in 2020.

It seeks to provide for the registration of coffee farmers by the UCDA. The registration of farmers was to entail capturing details of the size of land, number of coffee trees, particulars of a farmer, coffee buyers, sellers and nursery bed operators.

Buganda Kingdom, among other power centres, opposed some contents of the Bill, arguing that they would affect the thriving sector, which is recovering from decades of ruin.

Last year, President Museveni declined to assent to the Bill, asking Parliament to review several provisions in the proposed law.

He also wants Parliament to review Clause 26 on the registration of coffee farmers and the issuance of a certificate of registration for coffee nursery operators.

The Bill repeals the Uganda Coffee Development Authority Act, 1991, and only covering off-farm activities of marketing and processing, leaving on-farm activities like planting materials, nurseries, harvesting and post-harvesting handling outside the scope of the law.

Details on the coffee deal are scanty. Saturday Monitor is yet to obtain a copy of the agreement signed yesterday. What is clear, however, is that Ms Enrica Pinetti aka Enrica Maria Aristidina Pinetti, and her team are yet to deliver on the $379 million (about Shs1.4 trillion) International Specialized Hospital of Uganda.

In Africa, the Finasi Company, founded in 1969, lists its operations to be in Libya, Chad, Sudan, Egypt and Uganda. Its largest footprint is in the Middle East, operating in Iraq, Syria, Jordan, Kuwait, United Arab Emirates (UAE), and Saudi Arabia. It also operates in Russia, China, Mongolia, India, Switzerland and Italy. The conglomerate’s offices are in Milan, Italy, and Dubai, UAE.

Little is known about Ms Pinetti’s background. According to Bgreport, an independent information portal based in Italy, Ms Pinetti is originally from Oltrepò Pavese, an area of the Province of Pavia, in the north-west Italian region of Lombardy, and is the founder of Finasi srl.

Her presence in Uganda came in the limelight when she accused Mr Frank Mugisha Kasaka, the then head of procurement at the Ministry of Health, of allegedly asking for a bribe from her.
President Museveni, consequently ordered the former Permanent Secretary of the Health ministry to sack Mr Mugisha.

In Libya, Ms Pinetti, reportedly had a reputation as the go-to person for business, especially contracts, with the military.

According to the Bgreport, she registered seven companies in the British Virgin Islands in April 2008, sometimes as a shareholder or chief executive officer.

Some of the companies she has formed include Finasi Engineering Arca Magna for Heritage Conservation, Medfin Engineering Ltd, Finmed Design Consultancy SA, Finasset General Contractor, Hasep Holding Ltd, and Asico Consulting Group Ltd. They are all based at the Trinity Group in Dubai, UAE.

On September 18, 2015, the Bgreport, reported that a company linked to Ms Pinetti, Finaset di Pinetti, was accused of causing financial loss.

On 23 June, 2016, President Museveni directed the Ministry of Health to assist Ms Pinetti to build “her hospital at Lubowa so that referrals abroad stop and we stop the haemmorhage of an estimated $150m (Shs531b) per year that goes into “medical tourism” to India. The heart, the kidneys, the brain and the cancers should all be treated here.” The hospital is behind deadline by close to two years and no sign it will be operational soon.

Kenya Insights allows guest blogging, if you want to be published on Kenya’s most authoritative and accurate blog, have an expose, news TIPS, story angles, human interest stories, drop us an email on [email protected] or via Telegram
Related Topics:Enrica PinettiPresident Yoweri Museveni
Up Next