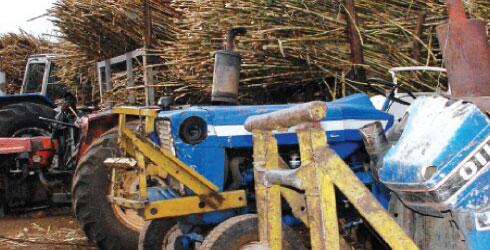 Trans Mara Sugar Company management is on the spot for failing to account for two of its workers; suspected to have been buried alive by factory waste almost a month ago.The government says that the factory faces closure as well as criminal charges of negligence following the suspected deaths on February 25.Bodies of the two are yet to be found. They are said to have been buried alive by an avalanche of bag as at the factory, near Keiyan River in Trans Mara West, Narok County. In the incident recorded on a CCTV footage, one worker was lucky to escape.Open inquiry

Trans Mara West Deputy County Commissioner Mohammed Noor told the media that he had requested the Directorate of Criminal Investigations (DCI), to open an inquiry file into the suspected deaths of Duke Mong’are (32) and Patrick Okero (28).

It is suspected that they were buried by an avalanche of waste from the factory. “I have asked the DCI to open an inquiry file and investigate if there is criminal negligence by the management. If they are found culpable, they should be held accountable,” Noor said.Noor spoke a day after Borabu MP Ben Momanyi stormed the factory demanding answers as to why the bodies are yet to be found.The MP held a meeting with the company’s head of security David Tonkei and legal director Samuel Karu before visiting the scene. “I have held a fruitful meeting with the management. We shall have a follow up meeting. It is disheartening that the bodies of the two are yet to be retrieved nearly a month after they were buried alive,” said the MP.One of the victims Mong’are is from Momanyi’s constituency. He wondered why the National Disaster Management Unit has not intervened. “The two families are in agony. They want closure on this issue and I am asking the national government to intervene,” he added.At the same time, the factory faces imminent closure for failing to retrieve the bodies after the expiry of a seven day notice given by the chairman of the National Environmental Complaints Commission Lumumba Nyaberi. “We gave them directives which if not fulfilled, we shall ask the National Environment Management Authority to close the factory. The multiagency committee is meeting at the factory this week to decide on the way forward,” said Lumumba.He said the factory has six months to remove the heap of waste saying it’s hazardous to the environment and a danger to the factory workers.

Sudanese Businessman Grabs Lands From A Widow In Mombasa