In 2019, Kenya Insights blew up the cover of rogue lawyers who targeted poor farmers in Sony Sugar and made away with millions in a fake payment claim saga.

Racketeers had been minting billions of shillings from millers in the sugar belt by filling cases using fake documents from unsuspecting farmers including those who died years ago.

Investigations revealed that the racketeers had been altering contracts of the unsuspecting farmers to file cases in Rongo, Migori, Homa Bay, Kisii, and Kehancha towns.

The company was receiving unusual payments claims from farmers. As a matter of resuscitating the sugar company, management contracted an investigating firm to establish whether these claims from lawyers were genuine.

The brief circumstances of the case are that South Nyanza Sugar Company Limited (SONY SUGAR COMPANY) officials reported that their company is experiencing enormous cases of embezzlement of funds. This is as a result of fake civil cases filed by advocates and using names of SONY SUGAR farmers (clients) without the farmers’ knowledge

There are over 50 law firms involved. In 2014 we had 5. Most these just came from Mumias Sugar Nzoia Sugar, and Chemelil Sugar.

Records at the company’s’ registry and those at Migori Court registry indicate that several farmers’ names are being used to file fictitious civil cases without their knowledge. Some cases are pending before court and others have been awarded money but when interviewing the relevant farmers, they asserted that they had never met the said advocates, never filed any civil case neither have they received the award monies.

In some instances, farmers who died as far back as 2013 are depicted to have risen from the dead to swear affidavits and file cases three years later which they won and were paid.

In one case, a dead farmer filed two cases in the same court demanding to be paid because his cane had not been harvested. The cases were filed long after he was buried.

In the two cases filed in May and June 2016, documents contain details for the same piece of land but show different dates on which the farmer allegedly executed the contract with the miller.

The cases filed and signed by the Migori farmer, who died on March 25, 2013 and a burial certificate issued on March 29, 2013, are still pending in court. They appear to have been filed on the same day as the case numbers follow each other.

In another case, relatives of farmer who died on September 3, 2013 at Tabaka Mission Hospital were shocked to learn that their father had filed a case in September 2017.

His son has in turn sued the law firm which drew the controversial plaint accusing the lawyers of fraud. Investigators have also discovered another case where a farmer John Otieno Orwa filed a civil suit in 2015 and was ultimately paid Sh296,676.63 and later went to court in 2018, and is demanding payment for 32 tones of unharvested cane which he has valued at Sh3,500 per tone.

The money paid out by the company to compensate bogus farmers was shared out by crooked lawyers and some Sony insiders who leaked vital documents and had in the past frustrated efforts to tame the runaway number of fake cases.

Advanced Forensics Limited, the private investigator hired by Sony to probe the matter established the string of the fraudulent cases.

The two Migori-based advocates Kerario Marwa and Samuel Odingo were charged at the Kisii Law Court with fraud and forgery. The case has stalled and hasn’t made much stride since 2019 in which is suspicious and could perhaps be a coordinated effort to frustrate the case.

On realizing that they’ve been victims of an elaborate crime, farmers have moved to the DCI in Ogembo to have the lawyers investigated. According to OB Extracts of the farmers who reported the alleged fraud seen by Kenya Insights, Nelson Jura & Advocates, Ms Odingo & Co Advocates have been accused of forging documents and demanding money falsely in fraudulent lawsuits. 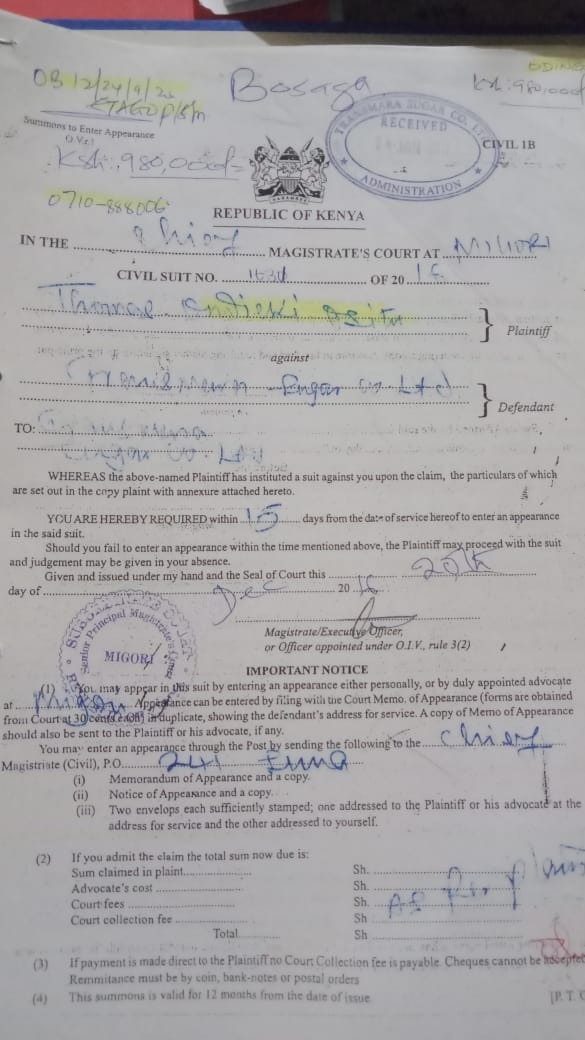 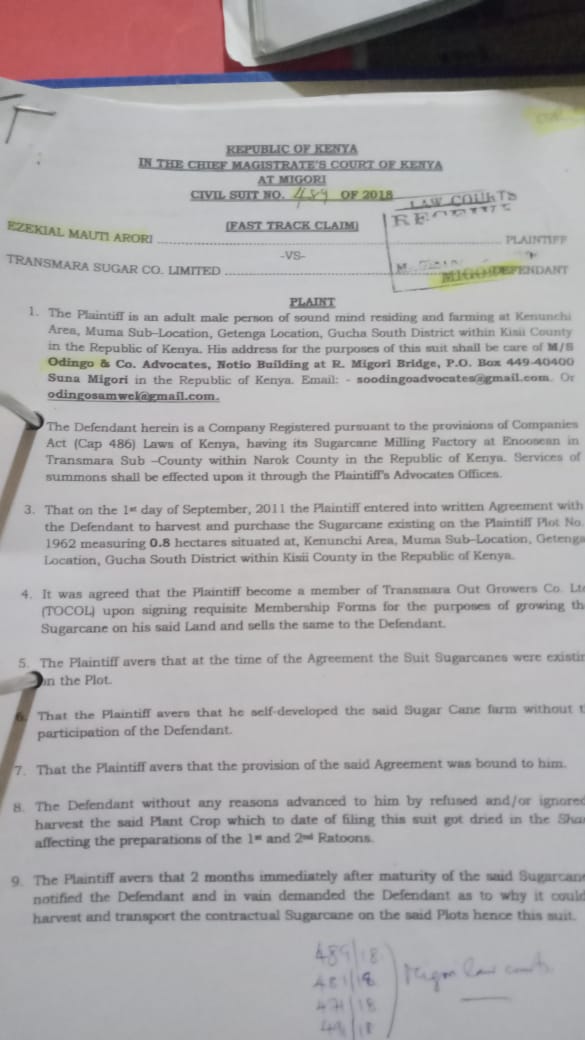 Kenya Insights also reviewed another case where an entire  family (2bros&mother) allegedly had their particulars picked from who knows where and cases opened in MIGORI COURT. The three include Johnson ng’wono, Geoffrey Ng’wono and Mother Everlyne Nyamoita Ng’wono. NELSON JURA Advocate FILED all the MATTERS in Migori without the consent of the farmers in what is clearly a fraud scheme. 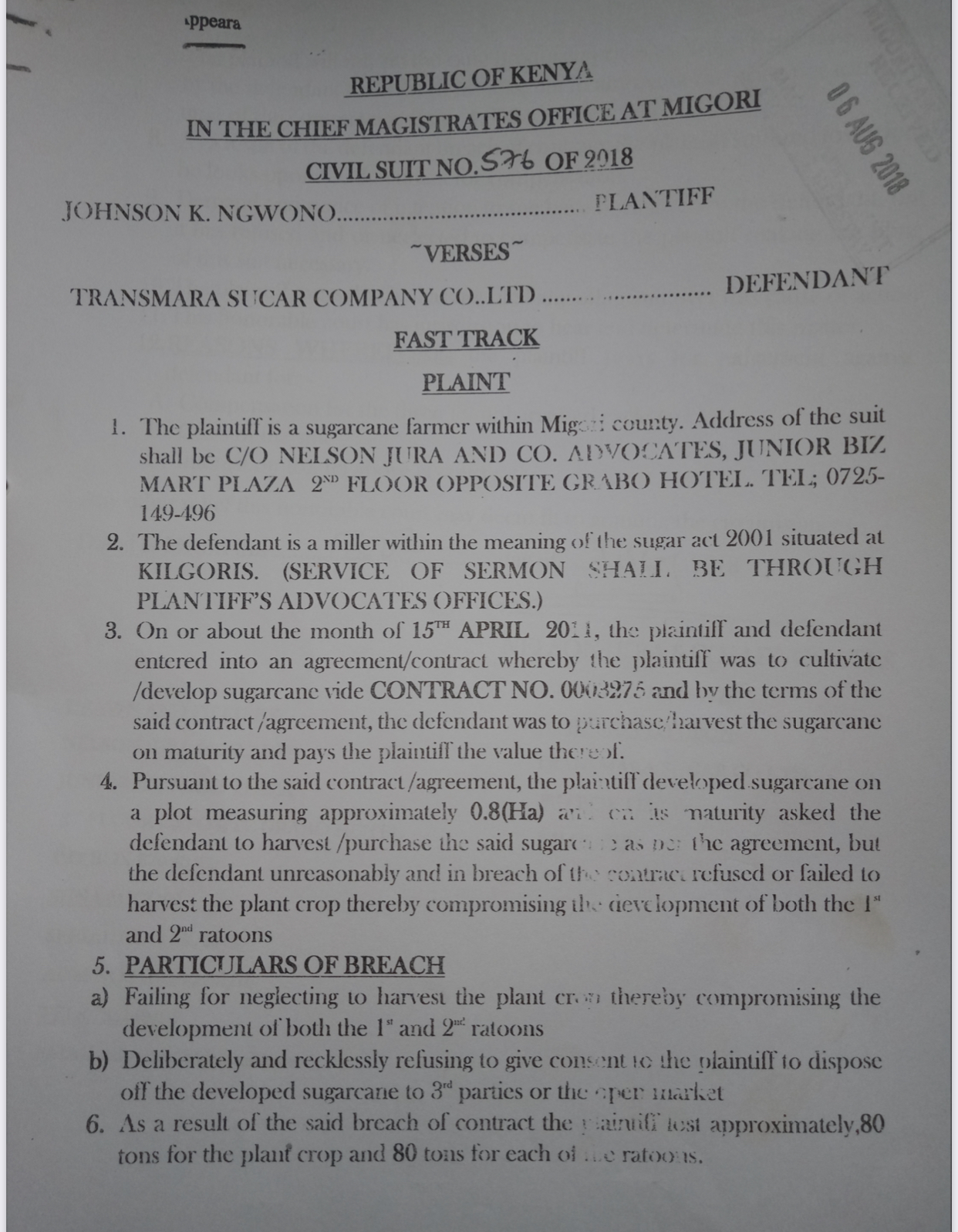 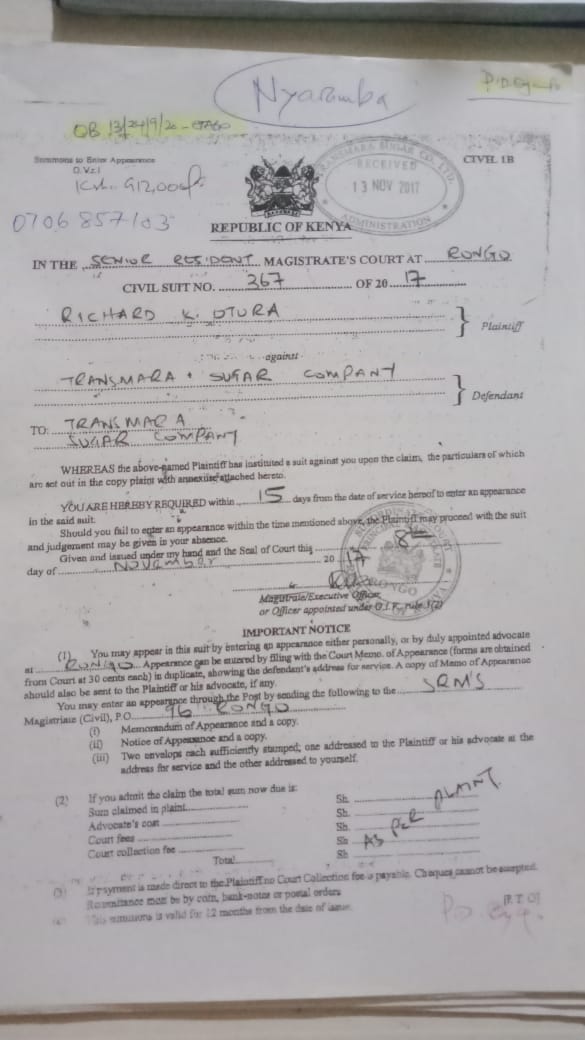 There’s also another bizarre case of Stepheno Ongubo who had died on 5Th May 2015 according to report verified by Kenya Insights but miraculously woke up from the GRAVE in 2018 walked to the Advocates’ office then Swore and signed an affidavit on Sept 2018. KERARIO MARWA Is the advocate who filed it posthumously.

These are just a few of the sampled cases, we have in our possession over 30 cases with similar pattern of theft by the lawyers.

Its sad that such rogue lawyers who target poor farmers are allowed to continue practicing despite the hefty evidence and even after being charged. LSK and relevant bodies should not entertain such criminal elements to erode the legal profession. They should not only be struck out of practice but thrown to jail to serve as an example to similar schemers. For now we’re asking the DCI and ODPP to move up with speed to ensure the criminal elements are dealt with once and for all and anyone found to be helping them In coverup and frustrating the prosecution to be bundled with them as well.

We shall keep you updated again.

Kenya Insights allows guest blogging, if you want to be published on Kenya’s most authoritative and accurate blog, have an expose, news TIPS, story angles, human interest stories, drop us an email on [email protected] or via Telegram
Related Topics:Advanced Forensics LimitedKerario MarwaSamuel OdingoSony Sugar CompanyTrans Mara Sugar
Up Next

WE Charity Exposed For Conning Donors About Building Schools In Kenya