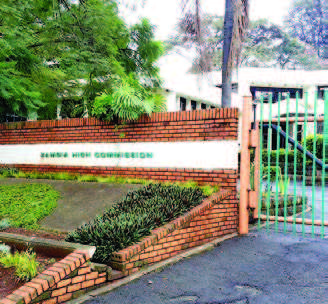 Three suspects accused of forging documents to grab Zambian embassy land valued at Sh1.5 billion will this morning be charged.The case has put police and Ministry of Lands on the spot over intrigues involved.Neeraj Jayatilal Kalaiya, Daniel Orange and Gilbert Oyoo (a surveyor), who were on Friday released on Sh100,000 cash bail each, are this morning expected to be charged with conspiring with government officials to fraudulently take possession of land owned by the Zambian High Commission measuring 1.925 acres.They are said to have used forged court eviction orders with the assistance of senior officers from Kilimani Police Station to evict Zambian officials residing on the land. The trio faces charges of forgery of deed plans, obtaining registration of land by false pretense and forcible entry to a private land contrary to Section 90 of the Penal Code.On the spot are Kilimani Deputy OCS Inspector Maryin Fwamba and Sub-County Police Commander Andrew Mbogo for allowing the suspects to evict employees of Zambian High Commission using fake documents.Sign post The land, which had been reserved as the residence of the Zambian Deputy High Commissioner, was allocated to the Zambian government on June 2, 1965.Zambian High Commission raised the matter with the Kenyan Government vide a letter dated October 1 after the suspects evicted employees, who had been stationed there to guard the land.The land had been utilised as residence for the Zambian Deputy High Commissioner until 2010 when the then occupant, Brenda Mutesha vacated the premises because it was dilapidated.She then appointed Duncan Cheruiyot to guard the land. “The mission placed a sign post at the main gate reading …this property belongs to the Zambian High Commission and is not for sale and the same was written on the perimeter wall.According to investigations by the Directorate of Criminal Investigations, things started taking a downturn on September 16 when Jayatilal allegedly fraudulently used the name of his father, Jayantilal Naranji Kalaiya, who had ironically passed on July 24, 1999 to acquire an allotment letter ref.43847/IV dated July 12, 1995 for land LR.1/9B measuring 0.75 hectares at a premium of Sh231,870 which he backdated.After forging the necessary papers, Jay atilal presented himself as the registered owner of the land by the virtue of a certificate of title deed IR235130 LR. 1/1392 of September 2021 and a lease IR 235130 of September 17, 2020.“On September 31, the intruder, Jayantilal, while in company of officers from Kilimani Police Station ejected the caretaker in pretense of a court order E351/2021 of September 27, 2021 issued by Milimani Commercial Court reflecting the mission care taker as the respondent,” the report.Sources at the DCI say it took a personal intervention of President Uhuru Kenyatta to have the file and all other documents related to the land retraced at Ardhi House after they had gone missing.More interesting After investigations, detectives disclosed that all the documents used in the transaction of the land were fake. For instance, a letter from the Ministry of Lands ref PPD/6/56/(II)/(52) dated September 23 confirmed that the Part Development Plan of reference number 42/14/94/15 of May 10, 1995 and signed by MN Kamunyu that led to the issuance deed plan 424088 of June 18, 2018 was a forgery.“On July 9, 2006 Jayantilal, in cahoots with lands officials, fraudulently obtained Government receipt No.4582704 and purported it was issued to Naranji on payment of Sh214,820 as stand premium,” DCI probe report states.More interesting is the fact that the Government Printer, in a letter dated October 19, confirmed that the receipt No.4582704 purportedly issued to Jayatilal on July 9, 2006 was actually issued by the agency on February 26, 2016 and could not have been available for use in 2006.Jayatilal, according to the report, is also said to have used a court order ELC. No.E351/2021 dated September 27, 2021, which was not an eviction order but a restraining order, as it was also illegal since it could not restrain the, occupant, Cheruiyot, an employee of Zambian High Commission who was not the owner of the land.

Related Content:  Police Close To Arresting Fake Gold Scammer
Kenya Insights allows guest blogging, if you want to be published on Kenya’s most authoritative and accurate blog, have an expose, news TIPS, story angles, human interest stories, drop us an email on [email protected] or via Telegram
Related Topics:
Up Next