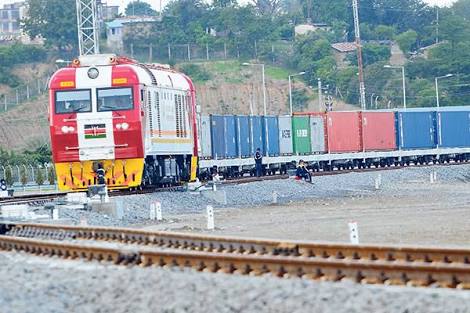 At the outset, the government had planned to haul 4,000 tonnes per trip in SGR, peaking at 16,000 tonnes daily; 106,000 tonnes weekly and 5.5 million tonnes annually to break even and repay its construction and operational costs.

But, at the current 12,452 tonnes per week, the SGR will have hauled on average, a mere 647,504 tonnes by the end of the year, casting doubt on the viability of the project. For a project that was sold as a revolution to cargo transport in Kenya, it has failed to meet the flashy expectations which is a real big worry given the huge loan debt it came with. The old train used to carry up to 30 containers, but now the new train can carry 216. Four trains would operate daily and government on its conception said they intended to increase these to eight.

Reality is now downing that SGR must have misdiagnosed as it is yet to attract enough transporters to sustain the project. Before the launch of the service in January, the government had indicated that four freight trains would run daily with a future outlook of eight daily far-reaching each carrying 216 TEUs.

This would mean that on each day, the ICD would receive a minimum of 800 TEUs, making 5,600 TEUs weekly and 291,200 TEUs annually. But the train hit its highest number of more than 600 TEUs mid-February, one-tenth of the envisioned capacity.

Faced with the harsh reality that this thing is not working, Kenya Railways gave incentives that would attract more importers to opt fir SGR but this is yet to level up. SGR is struggling to find importers willing to use its services and KPA is forced to make drastic price cuts to lure users. Costs are down to Sh.12,240 from Sh. 16,000 for a 40-foot container.

This government also had given a directive for goods destined for Nairobi and beyond to be transferred and cleared at Inland Container Deport in Nairobi. Forget the fact that Kenya is a free market and exporters should be at liberty to decide on how and which mode of transport that feel is profitable enough for their business models, now its mandatory to use SGR.

It is turning out that KPA lacks capacity at the ICD and the order to transfer all cargo there was rescinded after cargo had incurred storage charges at the port because of the delay in the clearance at the ICD and the transfer from Mombasa to Nairobi. The ripple effect of moving Mombasa to Nairobi is far reaching but mostly is the fact that it will kill the truck business which is a major source of income to communities living along Mombasa-Nairobi route.

For importers who are the key targets and life savior for SGR, the cargo system is not working at all for them, at least for now. Implementation of SGR was hurried in panic and in the event, it has disorganized importers and the Port staff alike. Existing failures begs the question whether a feasibility test was carried out and whether recommendations were adhered to. One thing that is evidently clear is this project was conceptualized for the good of tenderpreneurs who stood benefiting more from the bloated budget of Sh327B instead of recommended Sh16B. In it’s implementation, Mwananchi was not factored in and that’s why the reality is now biting.

Exporters are complaining that there are many hidden costs which make it more expensive to use the train for cargo compared to the trucks. Trucks get your cargo from the port/CFS and they take straight to your premises and take back the empty container to the assigned yard, at no extra fee. Whereas with the SGR must shunt the cargo from the ICD to your premises and bring back the empty to Msa by SGR at USD 100

Hidden charges in this are as follows; USD 100 verification at the ICD. Repatriation of the empty container back to Mombasa costs USD 100 paid to SGR back to the port and USD 40 charged onward to the designated empty yards which have always been catered by the transporters. Haunting of the cargo from the ICD to the premises of the cargo owner and the empty back to SGR

In Nairobi, facilities available lacks the capacity to handle large cargo volumes as it has been evident in the last two months, officials are less and they blackmail the importers with the need for bribes before the release of the cargo hence the delay. Government’s directive was to clear cargo within 6 hours. ICD delay and bottlenecks take 5 days to clear now.

Coming from all the extra costs incurred by cargo owners, it is pretty obvious they’ll pass the cost to consumers who’ll, unfortunately, bare the wrath of this logistical mess up. The new developments are also set to make changes in the freight industry and mostly the trucking business which feeds most people in the key Mombasa-Nairobi route. You can most certainly say the thinkers of this project and those who decided to force Nairobi as the central point for cargo clearance, didn’t factor in the ripple effect it would have on the many families living along Mombasa-Nairobi route and depend on the trucking business to make a living. Where will they go next? A convenient model would have both railway and road working for everyone and no one left injured but that’s not the likely case with the ICD directive.

People have invested in state of the art gas stations along the Nairobi Highway for example which will be idle. The abrupt and arbitrary decision to transfer things to ICD will discourage trade because of the uncertainties its coming with. CFS’ have laid staff due to uncertainty in the industry, the ripple effect felt by the suppliers, transporters.

Private CFS give waivers on rent accrued whereas the beaurecracy at KPA makes it hard for importers. There is a committee at the commercial office that must sit for one to be given a waiver and by the time they sit the charges have gone up. On behalf of the importer, CFS’ inspect container damages and seal discrepancies at the port and engage a surveyor before transfer. Procedure stipulates cargo to be inspected at the port in case of anomaly and engage surveyor and other stake holders failure to which claims will not be honored.

Evidently, the current model proposed by SGR is not working out as it’s more of loss making than profit making. There’s There’s need for government to sit down with importers and factor in their grievances instead of giving this an ostrich treatment. Most important is, as a free market, the government must not curtail, coerce importers to use SGR instead leave them at liberty to choose their best working model.

Report: Kenyans Optimistic That 2018 Will Be A Better Year, Majority Looking To Venture Into Businesses Than Being Employed