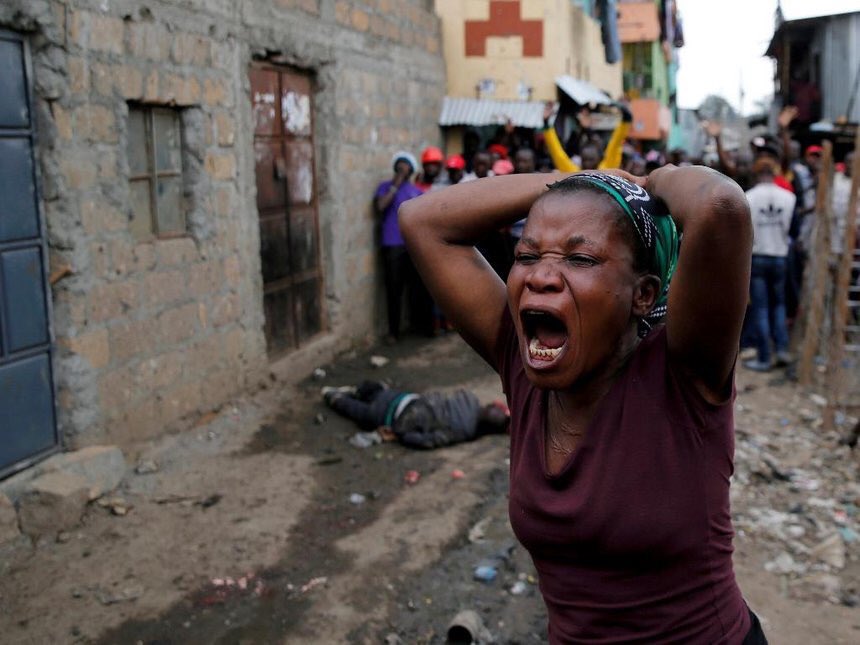 THE TYRANNY OF EVIDENCE

Yesterday I called a friend with family in Kisumu and asked if they were fine. She said she’s worried that they havent heard from some of them. But she broke down when she spoke of a water trader who was shot dead. What pained her was not just the loss of his life, but the fact that even that loss didnt count enough for Kenya to question what it has done and still does for this election.

That demand works against citizens because GoK is hoarding and clearing their evidence, as NASA has claimed is happening in Kisumu with body bags. Neoliberal global capital has another weapon: criminalizing freedom of speech and criminalizing libel. So police have promised to arrest us for claims about electoral violence, while preventing local media from reporting it. It also means that if you’re poor, the legal fees alone will scare you into silence. For instance, Bridge Academies is suing Sossion for a tweet he wrote questioning the education they provide to the poor. The law works for the rich, not for us, unlike what that anonymous ad on NTV likes to tell us.

Related Content:  China Will Continue To Increase It’s Influence In Africa As A Result Of Coronavirus Pandemic- DW

We’ve reached a point where, if I say it rained as I queued to vote, Jubilee bots will demand my evidence from the meteorological department. My point may not be that it rained, but that I was a dedicated because I braved the cold to vote. However, I’ll be distracted into proving it rained. And if I insist that I was talking about how I felt physically and consciously, I’ll be called self absorbed because I’m making elections about me.

My friend Lewis Gordon has published extensively about de-ligitimizing the black person’s experience so much that it cannot stand as evidence. Slavery denied the black experience as legitimate evidence. So a slave could not be oppressed if the evidence came from the slave alone. The experience of slaves was not enough as evidence. Evidence had to come from institutions to which the slave had no acccess. In other words, a slave could not be a witness in his or her own oppression.

That is what the international media & Jubilee have done to us. The US govt and media have joined Jubilee in de-ligitimizing the voices and experiences of Kenyans as evidence of a flawed electoral process. They have demanded amounts of evidence which those without governmental resources cannot produce to the massive scale demanded. And by preventing local media from reporting, we have no access to information independent of our experience. It means that if police shoot me, I have to film it, make sure the date is posted on the video, and then ensure I have bundles to send the video to the press. And if I die, I would need to make sure my remains are not put in a body bag. The burden of proof is on me.

Yet the constitution, which Jubilee is about to mutilate, affirms the sovereignty of the people. If people claim injustice, burden is on Gok to take us seriously, investigate and protect us, not to perform its righteousness to an international gallery and threaten to jail us. Meanwhile, GoK and its American friends have made Kenyans people whose lives, opinion and experiences do not matter enough for us to doubt the commitment of Jubilee to the people of Kenya. We are not evidence enough.

Dr. Wandia M. Njoya is a Senior Lecturer and Head of the Department of Language and Performing Arts at Daystar University in Kenya . Views are her own and not necessarily Kenya Insights’