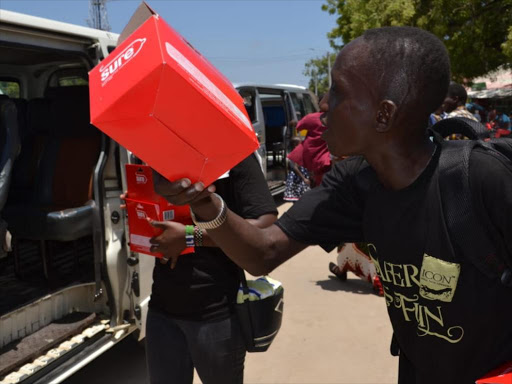 Condoms being distributed to PSV user in Kilifi Photo|TheStar

A recent report by WHO has revealed that Kenyan men are yet to reach the global usage of condoms which stands at 40 condoms per man yearly.

Currently released report on HIV situation in Kenya revealed that only 44 per cent of Kenyan men reported using condoms during their last coitus. This was labelled as high-risk.

On the other hand, only 40 per cent of Kenyan ladies reported using a condom at their last coitus. Which was considered high-risk.

Mother to Child transmission (MTCT) cases has increased gradually. The research shows that 11.5 per cent mother’s inffected their children.

Cases of pregnant Mothers living at risk of HIV has also gone high. That’s according to the medical reports and recent studies.

The report also revealed the condom distribution crisis. The more distributed brands were of low standards and qualities.

Records shows more than 182.3 million condoms were distributed in the Kenya in the past 3 years.

However, governments medical research says there is a very low usage of condoms.

In the country, there are 1,493,400 people living with HIV. With the majority almost breaking to AIDS stage.

Kenyan women prevalence is at 6.2 per cent while Kenyan men stand at 3.5 per cent.

Medical Centers and reports have advised and recommended that men should be encouraged to use condoms and other contraceptives.

Kenya Insights allows guest blogging, if you want to be published on Kenya’s most authoritative and accurate blog, have an expose, news TIPS, story angles, human interest stories, drop us an email on [email protected] or via Telegram
Related Content:  Raila: Military Officers Currently Under Training To Be Used In August Election Rigging
Related Topics:KenyanMenMTCTRecordsWomen
Up Next

US Embassy In Nairobi Issues New Requirements For Issuing Visa