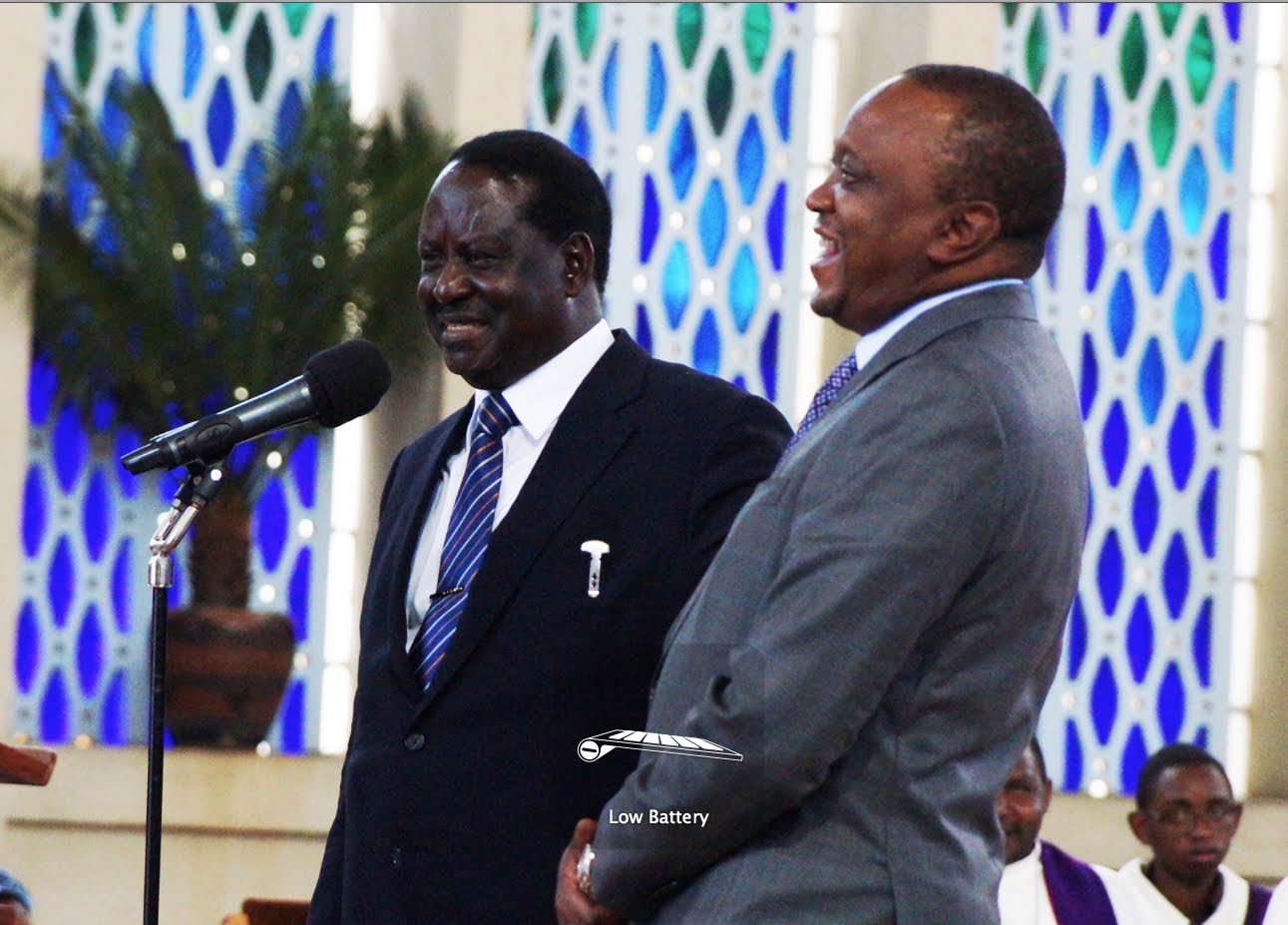 CORD’s principal Raila Odinga is seen by many as the most influential in the opposition and amongst his rivals in the NASA umbrella. Recent opinion polls rank him ahead of his colleagues in the coalition and second favorite to win the 2017 presidency after Uhuru.

Raila has unsuccessfully vied for Kenya’s presidency thrice and giving his final attempt in this year’s elections with age catching up with him. Raila is now 72 years, and his supporters are hell-bent to see him pull the trigger and hit the target with the last bullet he remains with.

Agwambo has made a precedence as an indomitable politician and as Kibaki once described him, ‘a nightmare and the worst politician anyone can ever have in the opposition.’ Talking of nightmare, Raila has been irreparable wound and salt to it for Uhuru’s tenure. He’s been consistent with his vast intelligence network in  exposing numerous corruption scandals within jubilee. So drained, Uhuru recently made an admission on Kameme FM, a Kikuyu community radio that his work as President has been jeopardized by Raila’s constant attacks on his government.

In the last two elections, Tinga believed he stood a good chance of winning, one language was standard that his victory was stolen. The worst happened in the deadly 2007/08 PEV that left over 2000 Kenyans dead and hundreds of thousands internally displaced following the violent backlash from the disputed elections. Agwambo was convinced his victory was snatched from him. While many endorsed this notion, Kriegler commission founded to answer the vital questions failed to single out the rightful winner between Raila and Kibaki even though admitted to massive rigging in both of the candidate’s strongholds.

Raila addressing a rally of his charged supporters in Bungoma

2013 the script was familiar with rigging claims which were further affirmed by unusual poll tallying and presentation. The end was distinctive to the previous election as the supreme court became the intermediary in solving the stalemate after Uhuru was declared the winner. Raila’s defense team put up a good fight laying evidence poking loopholes that convinced his supporters that the election was a sham and prayed for a rerun judgment. However, the decision ruled in contrast, and Uhuru’s presidency was upheld. The court played a significant role in preventing violence eruption as it gave a sense of fairness. Even though he didn’t agree, Raila urged his supporters in a patriotic way to accept the verdict, of which they did.

With August elections now five months away, political temperatures are already climbing the tube and politicians, as usual, making all kind of statements some inciting. NCIC is supposedly on high alert to curb hate speech, but their track record is unsatisfactory.

One thing we can all agree on is, the need for a peaceful post-election Kenya and this for me will be from a credible, verifiable, free and open elections. The bulk of work rests with IEBC who must ensure they deliver standardized poll without a single external influence and manipulation.

In an election, things can always go either way; win or loss that’s why it is disastrous to go with one mind without a fallback plan. In the US, It seemed like Clinton didn’t prepare her supporters well for any outcome other than a win. While it’s in every competitor’s spirit to aim for nothing less but a win, but again it is virtuous to psychologically prepare yourself should things go antithetical to your expectations.

Decisions are influenced by perceptions which are directly influenced by what we see, feel and hear. I’m alarmed by the political language especially in the Odinga’s camp that is gradually building a perception that the coming polls will be rigged in favour of the incumbent. While the allegations could hold waters, the backdrop of it all whether the accusations materializes or not is a distrust on IEBC and probability of dismissing poll results should they not be in favor.

The rigging claims by Raila and his faction comes in a double-edged sword baldric; it goes to fight for democratic space in ensuring fair elections and also a disaster bait trap should result go the other way. When emotions checks in, irrationality overrides fair judgment that’s why the confrontational tones should be hushed. Raila and NASA must prepare to win and also accept defeat but not go and take with them supporters a fixed mentality of wè either win or we’re rigged, this thought pack is corrosive to the peace walls. Elections can go either way.

While making the rigging claims open, it’s only productive if Raila and team, work with willing experts and multi agencies to stop any attempt of rigging at the inception. If it is setting up a hi-tech tallying center to counter verify results let it be, whatever it takes to let it be done so it doesn’t end up with loud empty whining. Raila has the power to pull and propel the masses to cryptic heights; he is an enigma in stirring up emotions than any other politician known in Kenya. He also needs to give assurance on accepting elections results. Trump when asked if he’d concede defeat replied with inflated confidence that he’d accept if he wasn’t rigged, a witty reply but gave an assurance

Uhuru and Jubilee likewise, must prepare their supporters for either outcome. While the history in Africa has been incumbents cling onto power and to dethrone one is as harsh as life in hell, Uhuru recently made an unusual statement that he would relinquish power should he be defeated in the coming elections. The question is would Uhuru live to his word or switch up, most importantly would his charged supporters also let go off that quickly? The greatest gift Uhuru can give Kenyans is not just police armory that opposition view as intimidating tactics but ensuring a smooth, credible and fair election.

Experts are hesitant to call a clear winner at this point with a good number hinting at an inevitable rerun in what is projected to be one of the tightly contested elections in Kenya history. A good number of Jubilee MPs must also cut their tongues off from making braggadocious, egocentric, chest thumping statements elucidating that they’ll use every machinery at disposal to win the elections. Nkaiserry and alike must tone down on war language, the intimidation statements, Kenya is going for an election, not for war.

The truth of elections, results can go either way. Prepare yourself psychologically for both.