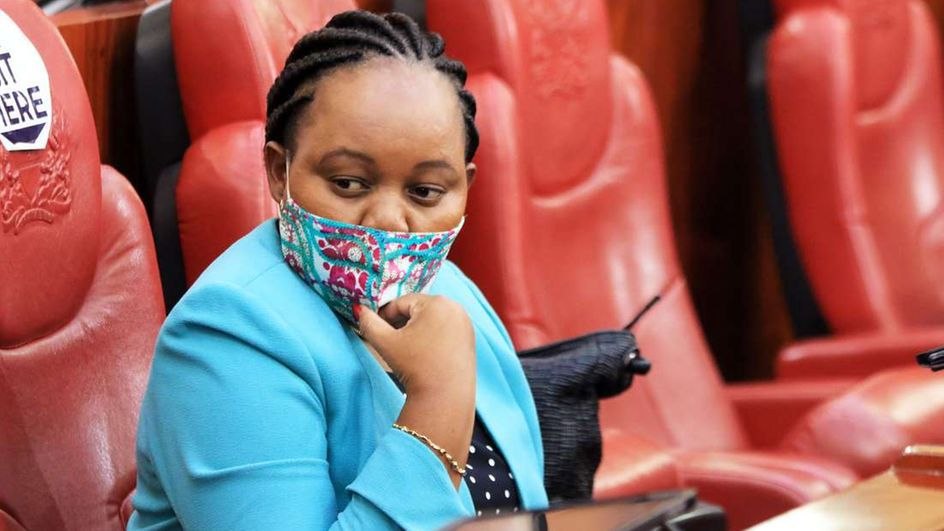 The Senate Select Committee appointed to probe the impeachment of Kirinyaga Governor Anne Waiguru has acquitted her, saying the County Assembly, who were the accuser, did not substantiate charges leveled against her. 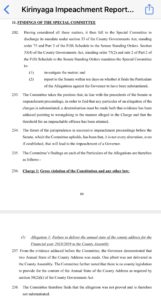 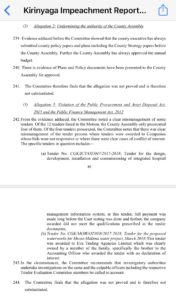 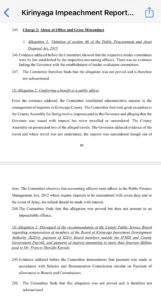 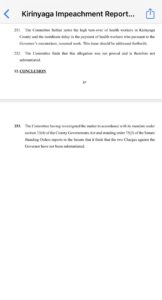 According to the committee, the County Assembly did not provide evidence directly linking her to alleged corruption, abuse of office and violation of procurement regulations.

“The Committee having investigated the matter in accordance with its mandate under section 33(4) of the County Governments Act and standing order 75(2) of the Senate Standing Orders reports to the Senate that it finds that the two Charges against the Governor have not been substantiated,” concludes the Committee.

On the allegation of violating procurement regulations, the committee noted that from evidence adduced before it, there was a clear mismanagement of some tenders, but they were not linked to Waiguru thus recommenced that the DCI and EACC delve deeper into the allegations, and using their forensic expertise, identify culprits for prosecution.

“Of the 12 tenders listed in the Motion, the County Assembly only prosecuted four of them. Of the four tenders prosecuted, the Committee notes that there was clear mismanagement of the tender process where tenders were awarded to Companies whose bids were not responsive or where there were clear cases of conflict of interest,” adds the committee.

“In the circumstances, the Committee recommends that investigatory authorities undertake investigations on the same and the culpable officers including the respective Tender Evaluation Committee members be called to account.”

An alleged Sh10.6 million irregular travel allowance and awarding of multi-million shilling contracts to cronies are some of grounds that was put forward by the Kirinyaga County Assembly to uphold the impeachment of embattled Governor Anne Waiguru.

A charge sheet tabled before an 11-member Senate team that was chaired by Kakamega Senator Cleophas Malala detailed alleged instances of abuse of office and gross misconduct, as well as gross violation of the Constitution.

The governor used her office to improperly confer a benefit to herself when she was irregularly paid for travel allowances by way of imprest amounting to Sh10,634,614 yet she did not travel,” read one of the charges by the ward representatives.

The assembly gave at least 10 instances where the governor invoiced the county for travel allowance payments, and the monies were made available the same day.

The beleaguered county boss was also accused of usurping powers of the accounting officer to establish a tender evaluation committee to serve as a conduit to award tenders to people with links to the county government.

The MCAs claimed that Waiguru installed partisan staff – Pauline Kamau and Gichira Wayne – who took instructions from her on how to award contracts.

Some of the tenders were awarded to firms associated with senior officers in the governor’s administration in an apparent conflict of interest.

The governor was also accused of undermining the authority and oversight role of the county assembly.

The MCAs alleged that the House had been denied opportunity to approve and oversight various development projects undertaken by the county government.

They claimed that Waiguru failed to present her plans and policies to the House for approval, leaving them to be spectators in the running of the devolved unit.

She was further accused of failing to deliver the annual State of the County address to the county assembly, which amounts to a “violation of the doctrine of sovereignty of the people as enshrined in the Constitution”.

The assembly said Waiguru failed to demonstrate respect to the people of Kirinyaga, while at the same time failed to bring honour and dignity to the Office of the Governor and promote public confidence in the integrity of the office.

Waiguru was accused of violating the Public Procurement and Asset Disposal Act 2015 and the Public Finance and Management Act 2012.

Some of the tenders the governor was accused of interfering with include a Sh19,145,740 bid for the proposed upgrading of Kagumo town.

The tender was initially awarded to Joames Investment Ltd, but was undertaken by Master Rock Construction Company, whose bid was non-responsive.

A tender for the construction of Kagia matatu parking phase one was awarded to Jipsy Civil and Building Contractors, which wasn’t a listed AGPO. This was despite the tender being reserved for AGPOs.

The Access to Government Procurement Opportunities (AGPO) programme was set up to facilitate participation of enterprises owned by women, youth and persons with disabilities in government opportunities.

The company is associated with the family of Chief Officer Finance Mugo Ndathi. His brother, Edwin Gicobi Ndathi, holds 300 shares in the company.

The MCAs said this was in total disregard of conflict of interest rules and in furtherance of a corrupt and joint criminal enterprise overseen by the governor.

Eva Trading Agencies Ltd was further awarded tenders for the Sh9 million Riagicheru Irrigation Water Project and the proposed works for Ngariama Water Project at a cost of Sh11 million.

A tender for installation and commissioning of Integrated Management Information was awarded to Velocity Partners Ltd for Sh50,691,565 despite no work being done. The county government had signed a Sh27 million contract with the firm but paid Sh50 million.

The MCAs said a tender to procure the governor’s vehicle for Sh15 million was also irregularly awarded.